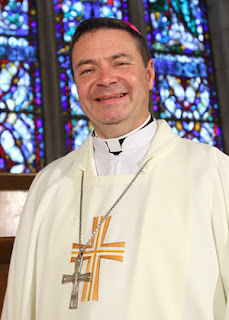 Msgr. Robert Brennan will be ordained
auxiliary bishop on July 25.
Photo courtesy of the Diocese
of Rockville Centre

A former student of the late Avery Cardinal Dulles, S.J., has been appointed auxiliary bishop of the Diocese of Rockville Centre, Long Island.

Rev. Msgr. Robert J. Brennan will be ordained along with bishop-elect Rev. Msgr. Nelson J. Perez by the Most Rev. Bishop William Murphy on July 25 at Saint Agnes Cathedral in Rockville Centre.

“I am honored and humbled that the Holy Father extended this call to serve the Lord in a new way,” Bishop-elect Brennan said. “I have learned so much from Bishop Murphy and I can never thank him enough for his kindness to me.”

Born in the Bronx and raised in Lindenhurst, Msgr. Brennan graduated with a bachelor’s degree in mathematics and computer science from Saint John’s University and was a doctoral student in Fordham’s Theology Department in the early 1990s, before he was named secretary to the late Bishop John R. McGann in 1994.

Msgr. Brennan has served as vicar general of the Rockville Centre diocese for the last decade, and since 2010 has been pastor of Saint Mary of the Isle parish in Long Beach. In addition, he regularly celebrates the Spanish-language Mass at the Nassau County Correctional Facility.

He was named Honorary Prelate and given the title monsignor by Pope John Paul II in 1996.

The Diocese of Rockville Centre, which Msgr. Brennan will serve as bishop, covers 1,198 square miles in Nassau and Suffolk Counties and serves approximately 1.7 million Catholics.

Cardinal Dulles was Fordham’s Laurence J. McGinley Professor of Religion and Society from 1988 until his death in 2008. In addition to holding this post, Cardinal Dulles was an internationally known author and lecturer, past president of both the Catholic Theological Society of America and the American Theological Society, and a professor emeritus at The Catholic University of America.