“Barbara has quietly been a groundbreaking figure in the field of Catholic feminist ethics. In a non-flashy way, she has been ahead of the curve on so many issues since the 1980s,” said Christine Firer Hinze, Ph.D., chair and professor in the theology department. “This lectureship refracts much of the work that Barbara has done over the years and ensures that light will continue to shine on those issues, especially at Fordham.”

This past January, Andolsen made a bequest that will support an endowed fund for the Barbara Hilkert Andolsen Memorial Lectureship. Every year, Fordham’s theology department will host a prestigious scholar to speak on a topic related to economic, racial, or gender justice, with special attention given to marginalized racial and cultural groups. The endowed fund for the lectureship will soon be open to other contributions from the public. 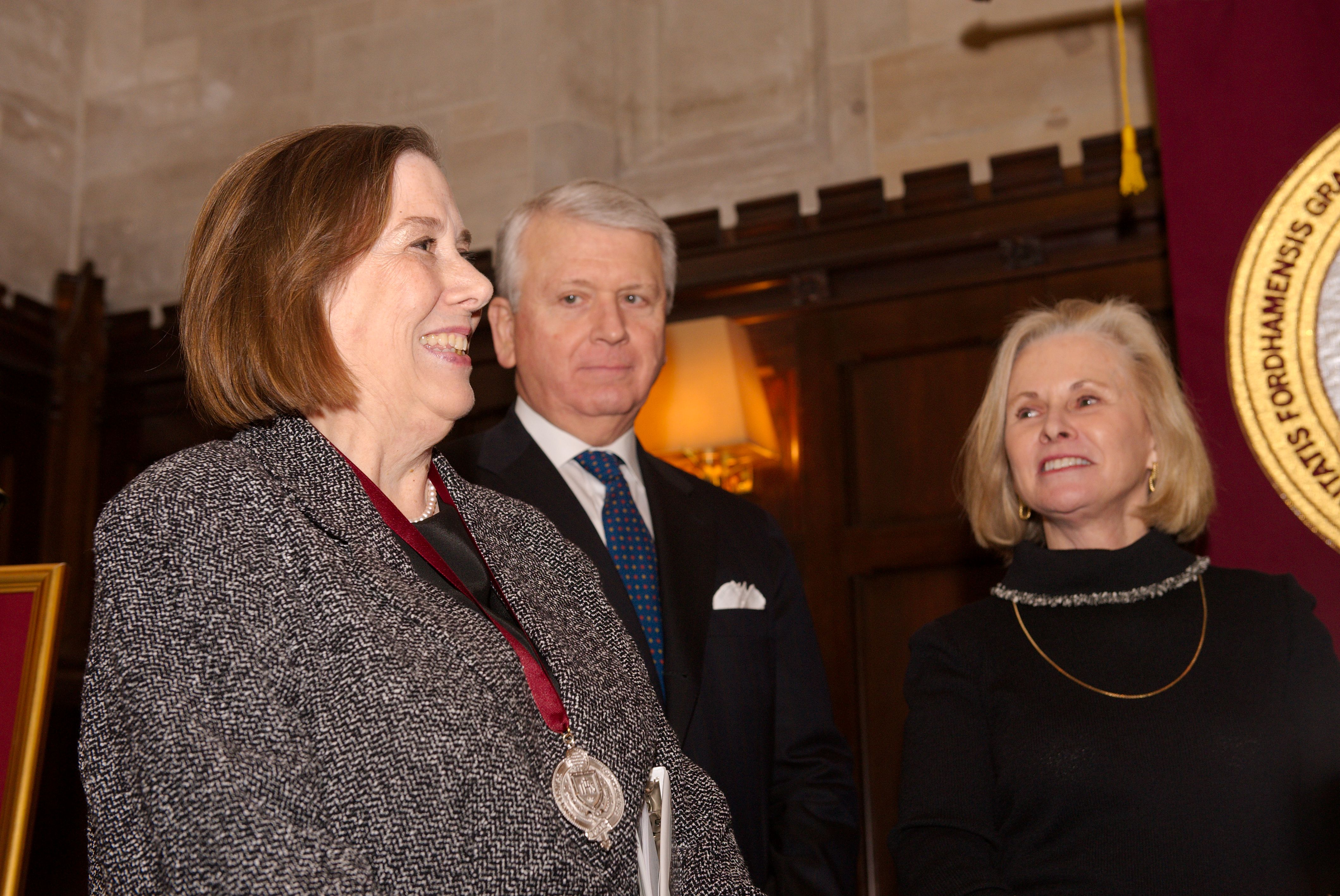 Andolsen with the benefactors of her Fordham chair position, James (FCRH ’66) and Nancy M. Buckman, in 2009

Andolsen is a feminist theologian and ethics scholar. From 2008 to 2019, she held several positions at Fordham, including the first James and Nancy Buckman Chair in Applied Christian Ethics, associate director of the Center for Ethics Education, and professor of theology. Andolsen previously taught at Monmouth University, Rutgers University, and Harvard Divinity School. She earned her Ph.D. in religion from Vanderbilt University, with a specialization in Christian ethics.

Andolsen’s research was ahead of her time, said Hinze. In her book Daughters of Jefferson, Daughters of Bootblacks: Racism and American Feminism (Mercer University Press, 1986), Andolsen wrote about how the women’s rights movement in the U.S. could have been different if more attention had been given to Black feminist perspectives. Andolsen also wrote The New Job Contract: Economic Justice in an Age of Insecurity (Wipf and Stock, 2009), the “first feminist analysis to connect religious understandings of economic justice with the issues facing both workers and the wider community,” according to the book publisher.

“Much of her work has brought together economics, business, feminism, Catholic ethics, and social thought in distinctive ways that were really pushing the field forward. She drew attention to many issues—including racism in the women’s movement, caring for the frail elderly, technology, and job insecurity—that were on the cusp of what was happening in society and in ethics,” Hinze said.

In a phone interview, Andolsen said the annual lectures were inspired by the work of her successor, Bryan Massingale, S.T.D., the current James and Nancy Buckman Chair in Applied Christian Ethics. 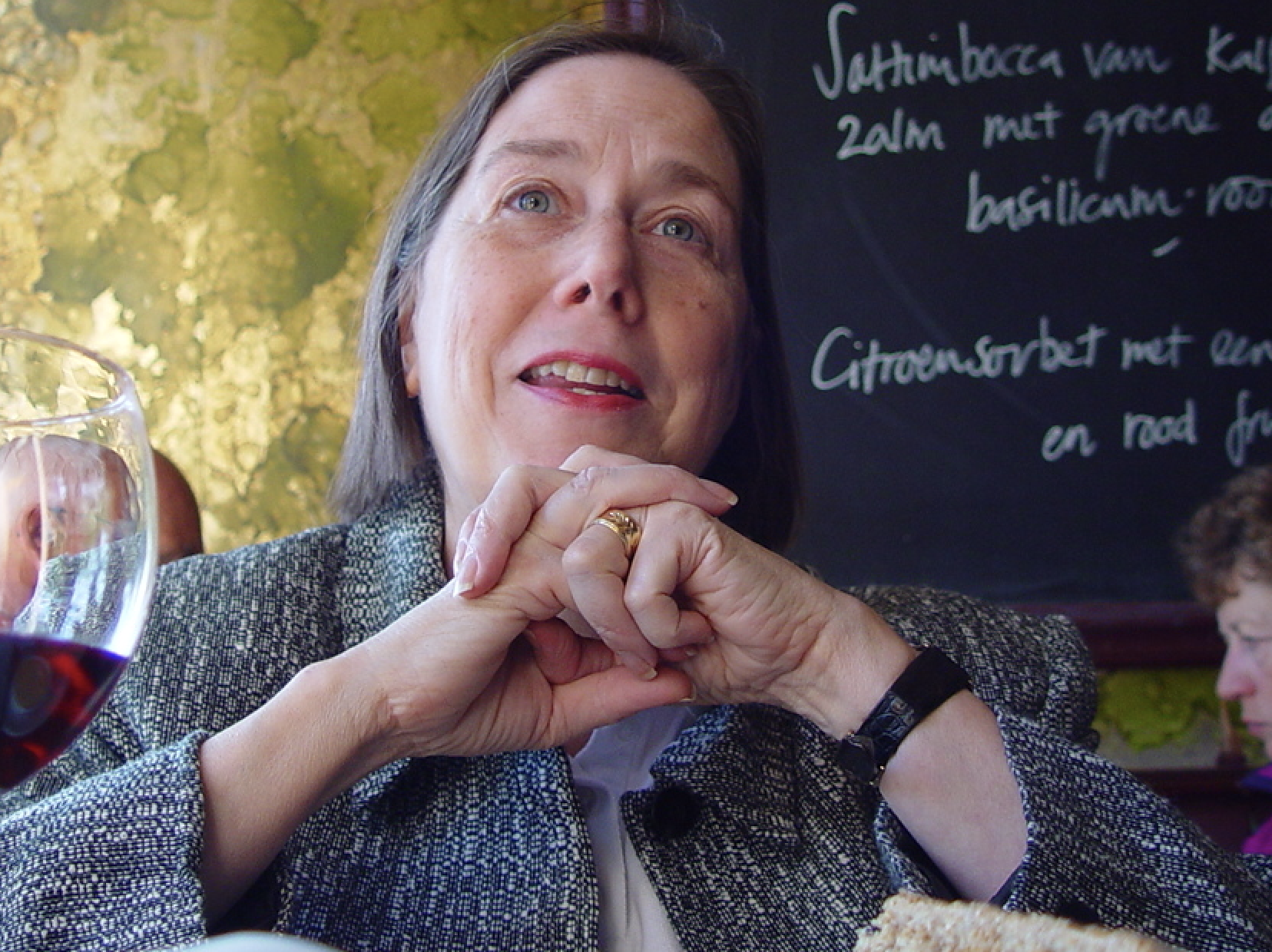 “His work made me aware that in our discipline, attention to racism as an issue has been surprisingly rare, given its social urgency. Not only is it rare, but also serious social analysis of racism appears only episodically in the official documents of the American Catholic bishops. Something will happen in society that focuses our attention on racism, and we’ll hear an idealistic statement from the bishops that denounces racism. But there won’t be any sustained attention,“ Andolsen said.

In response, she said she decided to support an annual event that would bring consistent attention to racism and theology—both at Fordham and beyond.

“Racism has frequently been called America’s greatest sin. I hope this lectureship gives insights to everyday people that help inform their conscientious stance on racism. It would also be wonderful if material from this lecture series came to the attention of the American Catholic bishops,” Andolsen said. “And I hope that this stimulates research among Fordham graduate students, faculty in the theology department, and other departments in the University. The scholarship available on questions of justice for African Americans and Native Americans is less than it should be in North America. There needs to be much more of it.”

Andolsen addresses the audience at her 2009 chair installation ceremony.