Michael C. McCarthy, SJ, a top academic leader at Santa Clara University and a key figure in its promotion of Ignatian ideals within the university and beyond, has been chosen as Fordham’s new vice president for Mission Integration and Planning. On January 1, 2016, he will take over from Monsignor Joseph G. Quinn, who will return to the Diocese of Scranton, Pennsylvania, where he served before coming to Fordham six years ago. 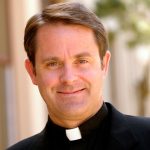 In addition to serving as executive director of Santa Clara University’s Ignatian Center for Jesuit Education, Father McCarthy is Edmund Campion Professor in the religious studies and classics departments and assistant to the university president for mission and identity. He has brought Santa Clara’s Ignatian Center to a new visibility in Silicon Valley and beyond by stressing the integration of faith, justice and the intellectual life, and served as the university’s public voice on the importance of Jesuit, Catholic higher education in the United States. His work on this topic has appeared in the Chronicle of Higher Education and the New York Times.

“We are delighted to be bringing Father McCarthy to Fordham,” said Joseph M. McShane, SJ, president of the University. “He is not only a respected scholar, but a superb ambassador for Jesuit values and a gifted teacher. As Fordham approaches its 175th anniversary, we hope to find ways for the Jesuit tradition to support not only the student experience but also the academic mission of the University. Hence we are changing the title of this particular position to vice president for Mission Integration and Planning.”

Father McCarthy entered the Society of Jesus during his undergraduate years at Stanford University. After switching to Santa Clara University, he earned his bachelor’s degree in classical languages and literature magna cum laude and went on to earn the M.A. (Oxon.) in Litterae Humaniores at Oxford University, taking First Class Honors. He taught high school in Sacramento, California, for three years before earning his master’s in divinity with distinction from the Jesuit School of Theology in Berkeley. In 2003, Father McCarthy completed his doctorate in theology at the University of Notre Dame—attending as a Presidential Fellow—and joined the faculty at Santa Clara.

Since then he has taught everything from freshman surveys of Christian traditions to advanced seminars on the texts of Homer, Euripides, Horace, and Augustine, and his research into ancient theological traditions has appeared in Harvard Theological Review and other distinguished journals. He has been a visiting professor at Loyola University Chicago and board member at Seattle University, Loyola Marymount University in Los Angeles, St. Ignatius College Preparatory in San Francisco, and Bellarmine College Preparatory in San Jose.

Since becoming executive director of Santa Clara’s Ignatian Center for Jesuit Education in 2011, Father McCarthy has led its five-year plan to elevate Ignatian values and ideas at Santa Clara University and apply them in the wider community. Under his leadership, the center awarded faculty research grants and sponsored institutes, seminars, and forums on the Jesuit educational tradition for faculty members; it also expanded its community-based learning and immersion programs for students. The center has led Santa Clara’s Thriving Neighbors Initiative, an educational and social service partnership with a neighborhood of recent Latino immigrants in downtown San Jose.

Monsignor Quinn served with distinction in a number of parishes in the Diocese of Scranton before accepting the position of vice president for University mission and ministry in 2009. He initially agreed to a five-year stint but extended it to six years so he could coordinate Fordham’s response to Pope Francis’s U.S. visit. He has been appointed pastor of Our Lady of the Snows Parish, effective Oct. 2.

“A saintly priest. A wise man. A good friend,” Father McShane said of Monsignor Quinn. “We will miss him more than he will ever know, and Scranton is lucky to get him back: he is the most talented and most loved priest in the diocese.”