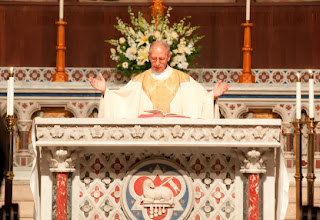 Fordham welcomed a notable member of the worldwide Jesuit community to campus recently, when Adolfo Nicolás, S.J., Superior General of the Society of Jesus, made a stop during an official trip to the United States.

The visit was part of a two-week tour to meet with American Jesuits and Jesuit scholastics, visit Jesuit high schools, and speak with administrators of Jesuit colleges and universities. The trip was Father Nicolás’ second visit to the United States since being elected Superior General of the order in 2008.

While in New York, Father Nicolás met with Jesuits in formation, visited retired Jesuits at the Murray-Weigel Jesuit Community, and celebrated Mass with 150 Jesuits, lay directors, and staff from the New York province.“Father Nicolás encouraged us to go deep in our prayer, work, and study, that this is what we can offer the church and the world,” said Thomas Scirghi, S.J., associate professor of theology and rector of the Jesuit Community at Spellman Hall.

“He is concerned that many Jesuits wear too many hats, spreading themselves too thin. The danger here is it keeps you on the surface and prevents you from plunging deeply into any one type of work.”In addition to New York, Father Nicolás traveled to Boston, St. Louis, and Chicago. He concluded his trip with the presidents, administrators, and board members of the Association of Jesuit Colleges and Universities (AJCU), an organization that represents the 28 Jesuit colleges and universities in the United States.At the gathering, Father Nicolás broached a topic that he said has not yet been fully confronted: the future of Jesuit schools in the face of changing demographics.

“In 1973, there were about 212 million Americans; today there are about 316 million. That means that if the number of Americans per Jesuit institutions of higher learning had been kept constant, there should be 42 AJCU institutions today,” Father Nicolás said. “And since 1973, the number of U.S. Jesuits has declined from 6,616 to 2,547. This means that if the total number of U.S. Jesuits per AJCU institution had been kept constant, there should be only 11 Jesuit colleges and universities today.“Since the supply of Jesuits is increasingly limited while the demand for more Jesuits seems to always expand, it would seem that some changes are in order.”

These changes are already happening—for instance, a number of AJCU presidents are not Jesuits, and some are not Catholic. Such changes reflect the important role that the laity plays in the Society’s mission, Father Nicolás said; but it is crucial that the 28 AJCU institutions and the Society of Jesus ensure their relationship does not become “stretched so thin that it becomes impersonal and meaningless.”

“[I have no doubt] you are capable of undertaking bold challenges and that you are ready to do whatever is necessary to serve this important ministry that serves so many individuals, so many communities, to say nothing of the Lord and his church,” he said. “You have the talents and temperament, the head and heart, to do what needs to be done.”For the full text of Father Nicolás’ remarks to the AJCU, read the transcript in America Magazine. 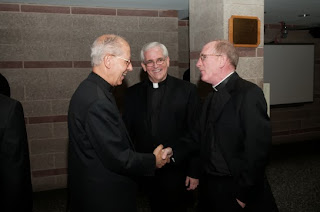