skip to main content
Return to Fordham University
You are at:Home»Living the Mission»Fordham Students and President Tetlow Partner with Community at Urban Plunge
Fordham students partnered with Drew Gardens as part of the Fordham Urban Plunge program. Photos by Marisol Diaz and video by Tom Stoelker
Learning about health disparities in the Bronx, planting and mulching a community garden, helping to serve lunch to those in need, and cleaning up local streets were just a few ways some first-year Fordham students started their college careers.

The students were participating in the Urban Plunge Program, a pre-orientation program run by Fordham’s Center for Community Engaged Learning. Students from both the Lincoln Center and Rose Hill campuses can participate in the three-day intensive program, in which they learn about the communities they’ll be living in, engage with community partners in those neighborhoods, and gain hands-on experience while working with local organizations. The students participated in walking tours of the neighborhoods, enjoyed concerts and performances, and participated in community engagement efforts. More than 230 students participated in the program this year, one of its largest groups ever. 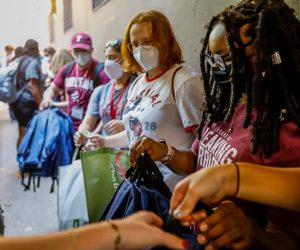 Students partnered with NYCHA and other organizations to provide school supplies at Amsterdam Houses in Manhattan.

Michela Fahy, a senior at Fordham College at Rose Hill who served as a senior captain for the program this year, was part of the group working with POTS—Part of the Solution—a longtime community partner of Fordham in the Bronx. She said that she hoped the new students in the program would gain a new understanding of their communities and the people in them.

“Really just jumping headfirst into exposing themselves with themes that they might not have been familiar with, especially at POTS—they’re learning a lot about people who are experiencing homelessness, people who just might like an extra meal,” she said. “I’m encouraging them to explore and ask those questions about a lot of contemporary issues that we face in New York City. The program really does a good job of immersing them in it.”

President Tania Tetlow speaks to students as part of the Urban Plunge Program.

“This is just a really great place,” President Tetlow said at the Tremont Neighborhood Health Action Center, “where you see what it means to use your intellectual, analytic skills of research and combining it with serving people, and the thing that will teach us the most is actually listening to the people that we’re serving, and understanding the insights they have and the profound ways that all of this has impacted their lives.”

Anita Reyes, assistant commissioner of Bronx neighborhood health for the NYC Department of Health and Mental Hygiene, said this was the first time the Tremont Neighborhood Health Action Center partnered with Fordham for Urban Plunge.

“We think that this is a good opportunity to integrate the students, to see the communities and understand the work that’s being done in these communities,” she said.

Reyes added that they were really excited to “have Fordham in our house.”

“This is really a community effort, and we’re hoping that this can grow,” she said.

Yazmine Sibiski, a first-year Fordham College at Rose Hill student from New York, said that she found out about Urban Plunge through pre-orientation events and knew that it was something she wanted to do.

“I’ve always had an interest in the human rights and social justice fields,” she said, adding that she created a human rights club at her high school. “This is a really great way for me to see different insights because I believe that it’s really important to hear other opinions, especially when you’re trying to make change, you have to know your environment.”

At Drew Gardens in the Bronx, a long-standing community partner, students worked with volunteer Mario Figueroa to plant and mulch at “one of the largest community gardens in the Bronx.” The work was especially important as the garden had been closed for a few months after an issue with the State Department of Transportation over registration and insurance.

Students partner with community organizations to clean up trash from the streets.

Figueroa said that the community rallied to support the garden and they were able to work out the situation and reopen the space.

“This land is still sacred and we do what we do because we’re local residents and there’s a passion to be here,” he said.

Lola Velez, a first-year Gabelli School of Business student from Puerto Rico, said she wanted to be immersed in the community she was moving to.

“I wanted to get out of my comfort zone and everyone’s usually talking about ‘the city,’ but I wanted to get to know where we are, which is the Bronx,” she said.

First-year Fordham College at Rose Hill student Noah Lucia said that he worked with New York State Senator Samra Brouk over the summer and saw the legislative side of community work, so he was interested in learning more about grassroots efforts.

“I did Urban Plunge because I worked in the New York State Senate, and just seeing the ways you can give back to the community in a positive way, and especially renewal efforts, like Urban Plunge—going in and seeing how privileged we are—really offers us [a way]to see different perspectives, especially coming from Rochester where I’m from,” he said.

Jackson Lewis, a senior at Fordham College at Lincoln Center who is pursuing a five-year accelerated master’s program in English, said that he wanted to participate as a student leader in the program because of his “formative experience” at Urban Plunge as a first-year student from California.

“I think it really just reinforced my commitment to social justice, social action, community engagement,” he said. “The notion that you can come back [to Urban Plunge]and support people in the way that you were supported was something that was just irresistible to me.”