skip to main content
Return to Fordham University
You are at:Home»Colleges and Schools»Graduate School of Religion and Religious Education»Fordham Student Sharing a Laugh On Behalf of Pope Francis

What do you call a sleepwalking nun? A Roman Catholic. What do you call it when Batman leaves church early? Christian Bale. What did Buddha say to the hot dog vendor? Make me one with everything.

Admit it: You want more, don’t you?

Well, you’re in luck! Jokewiththepope.org, a website launched by the Pontifical Mission Societies to coincide with the upcoming visit of Pope Francis to the United States, is chock full of similar jokes submitted by users around the world.

When users submit their jokes, they can “donate” it to one of three causes: “Help Children in Need” in Buenos Aires, Argentina; “House the Homeless” in Addis Abada, Ethiopia; and “Feed The Hungry” in Nairobi, Kenya. At the end of the campaign, the person who submitted the funniest joke is to be dubbed the first-ever Honorary Comedic Adviser to the Pope, and the cause they “donated” to will receive a $10,000 donation. 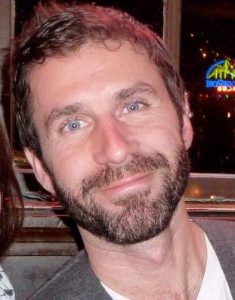 The campaign has tapped comedian Bill Murray to serve as Honorary Adviser for Pontifical Comedy.

Jimmy Nagle, a doctoral candidate at Fordham’s Graduate School of Religion and Religious Education and a project research and senior writer for the Pontifical Mission Societies, said the campaign is part of an effort to drum up interest in a newly revamped app called Missio.

Nagle said the app, which he helped redevelop (it was first unveiled in 2013) as a way to reach out to younger Catholics, is “Facebook meets Tinder for do-gooders.”  Once a simple aggregator of news stories, the revamped Missio lets users interact directly with project managers and anyone else who has “liked” and become part of the app’s community. In addition to donating money to a project, users can create an event and share awareness of it across their wider social media network.

“Virtual communities area not so virtual. Real relationships develop, and real things happen in these communities,” he said. “We’re trying to harness that, to allow people to create communities around shared interests or causes—whether it be water, women’s education, or various causes around the world.”

Working the campaign is a great fit for Nagle, who taught high school in Portland, Oregon for 10 years and was a former Franciscan novice. His doctoral research focuses on members of Generation X and Millennials who are on the margins of the church.

He admits the joke campaign is a little unusual, but then again, Pope Francis is “not a typical Pope.” In fact, Francis gave the contest his official endorsement last week in a statement in which he asked Catholics to become “missionaries of joy.”

“I like to laugh a lot. It helps me to feel closer to God and closer to other people. When we laugh with each other—and not at each other—God’s love is present in a special way,” the pope said in a statement.

“I invite you to share your joy with a laugh! God longs for you to be happy! Share your jokes and your funny stories: the world will be better, the Pope will be happy and God will be the happiest of all.”

Nagle said Francis represents all the things that he finds life-giving in the church.

“I feel like I’m not so crazy for sticking with this institution and walking along with it as it struggles. I think he owns the wounds really well,” he said. “He’s the pope I’ve been hoping for in my lifetime.”

And for the record, Nagle said his favorite joke so far is Murray’s contribution:

Did you hear about the two antennas that got married?

The wedding was just ok, but the reception was great.

For more coverage of Pope Francis’ visit to the United States, visit http://www.fordham.edu/papalvisit.