skip to main content
Return to Fordham University
You are at:Home»Arts and Culture»Fordham Offers English Classes to Bronx Community
ESL student Ángela Santiago gets a hug from professor Michelle Bialeck. Photos by Bruce Gilbert
Dozens of Bronxites celebrated their new English skills at a party on the Rose Hill campus on June 21.

The dinner reception and certificate ceremony capped off the first English as a Second Language (ESL) course offered to Bronx adults by Fordham’s Institute of American Language and Culture (IALC). The free course was made possible by a grant from the city’s Department of Youth and Community Development and through collaboration with Fordham’s Office of Sponsored Programs.

“We wanted to be more involved in the community,” Community ESL Program Coordinator Jesús Aceves-Loza said of the IALC, which has been providing English courses for college students from around the world for more than 30 years.

“The Jesuits have this principle of cura personalis, care for the whole person. Talking metaphorically, the whole person is the Bronx, and we need to address the needs of every part of that huge body.”

Students in the Community ESL program hailed from 13 countries, including Nicaragua, Mexico, Italy, and the Dominican Republic. Many of them brought children and other family members to the reception. After the certificate presentation, some gave speeches or performances, including dances, songs, and even a clown act.

‘I Have Been Waiting for This’

Aceves-Loza said the ESL students ranged in age from a young man of 23 to 83-year-old “Italian nonna” Giuseppina Cibelli, of whom he spoke fondly.

“She said, ‘This is the first time we feel that any Catholic college is interested in us. For 50 years I have been waiting for this. It’s wonderful that Fordham is taking care of us as its neighbors.’” 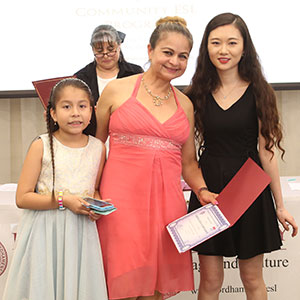 The program was taught and developed by Joy Jo, Ed.D., and other ESL teachers from the IALC; other volunteer instructors included Fordham staff, students, and Jesuit scholastics from Ciszek Hall.  All teachers completed a certificate program in Mental Health/First Aid from the New York City health department as part of their training.

The course was taught on the Rose Hill campus and, through a connection with Fordham’s Dorothy Day Center for Service and Justice, at the Our Lady of Mount Carmel parish, which had offered ESL courses in the past. Several of the students were nuns in the Hermanas Misioneras Servidoras de la Palabra order, who come from Mexico and serve communities throughout the Bronx.

“We had a chance to learn firsthand about the challenges these people face on a daily basis,” said Aceves-Loza. During the assessment period, he said, “Some people broke down.” Some students were living in shelters, looking to find a job so they could find a home. Some were refugees. Some were looking to advance in their jobs and provide a better life for their families.

Supporting Not Just Students, but Families

One of the students, Luis Ingram, works in a company that makes electronic systems for elevators. He is a 37-year-old father of two children who came to the U.S. from Nicaragua.

“This program has given me the chance not only to learn a new language, but also to find new opportunities and open new doors in my life,” said Ingram, who wants to go back to college and become a manager. Aceves-Loza said for Ingram, “family is everything.”

Many of the program’s students had a high level of education, holding bachelor’s and master’s degrees. Most had finished high school. “But they can’t find a job here because they don’t speak English,” Aceves-Loza said.

Student Quendy Perez, 47, lives with her son, Adonis, who was also a student in the program. Perez has a part-time job, but wants to become proficient in English in order to find better employment. She built a strong connection with Professor Jo, her instructor.

“I love the way she teaches us,” said Perez, who came to the U.S. from the Dominican Republic, “I also love her passion, patience, and dedication.”

The program initially enrolled 146 students with beginner and intermediate English skills. Some had to drop out because of other commitments, including one person who found a job during the course—“which was a good reason!” said Aceves-Loza. At the end of the six-month program, Fordham presented 96 certificates to students who showed a gain on the assessment test and attended at least 85 percent of classes.

James Stabler-Havener, director of the IALC, noted that working together with the Office of Sponsored Programs, the institute received a renewal of the grant and is also seeking additional funding sources to expand the program for returning students and new students.

In the meantime, over the summer the institute will be offering free career workshops, as well as programs on immigrant rights and how to navigate the school system as parents.

“When we enroll a student, it’s not the student alone, it’s their family,” said Aceves-Loza, who noted that these language skills are helping adults to communicate with their own children, many of whom have forgotten their parents’ native tongue. “Family support is crucial.”

Aceves-Loza said when a representative from the Department of Youth and Community Development came to visit the program, she called it a model.

“She said, ‘You are one of my two best programs,’” he said, acknowledging that he and his colleagues appreciated the praise.

“But it’s much better to see how the program has changed lives.”