skip to main content
Return to Fordham University
You are at:Home»Living the Mission»Fordham Mourns Joseph A. Currie, S.J.

Joseph A. Currie, S.J., JES ’61, GSAS ’63, former associate vice president for mission and ministry who served as chaplain of the football team, a member of the theology faculty, and director of Campus Ministry, died suddenly on March 3 in Philadelphia, Pennsylvania. He was 80 years old.

According to his family, Father Currie died while walking from work at Chestnut Hill College, where he was assistant to the Office of Mission and Ministry.

“Father Currie was a priest’s priest,” said Joseph M. McShane, S.J., president of Fordham. “He was the man to whom other priests brought their burdens, and if Joe had burdens of his own, those he kept to himself. He was a friend, a mentor, and trusted colleague, in addition to being a pillar of the University community and a spiritual guide to many, many students over his long career. I will miss him terribly.”

Father “Papa Joe” Currie served at Fordham from 1997 to 2010. As the football team’s chaplain, Father Currie stood by the Victory Bell each time the football team won and rode the long bus rides home with the team when they lost. Those who knew Father Currie said he made students laugh and guided them through difficult times. He performed marriage ceremonies for alumni and baptized their children. He fought for the marginalized and taught students how to pray.

“He represented so well the Jesuit ideals of being someone interested in helping others, committed to justice, a great example of combining a lot of action with a lot of spiritual depth,” said his brother Charles Currie, S.J., FCRH ’52. 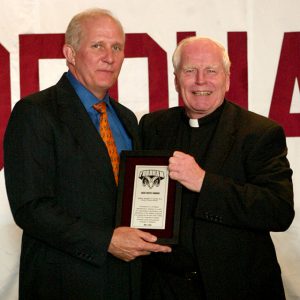 Father Currie is also survived by another brother, Robert Currie, S.J., FCRH ’64, GSAS ’66, as well as their extended family.

Born on August 20, 1936 in Bala Cynwyd, Father Currie was one of five children: four boys and a girl. Father Charles said that their parents did not influence the three boys’ choice to become Jesuit priests.

“Our decisions were all free choice. They didn’t put pressure on any of us and they would’ve been happy no matter what we did,” said Father Charles. “Robert and Joe saw what I was doing and they liked what they saw.”

Father Currie entered the Society of Jesus in 1955 and was ordained in 1968. He spent 22 years in India as an educator and spiritual director before returning to the United States to serve as a campus minister at Georgetown University, and later at Loyola University in New Orleans. He arrived at Fordham in 1997 to take on the role of associate vice president of mission and ministry.

“He was not caught up in titles, he functioned as a human being rather than as any title that may have identified him,” said Sister Anne Walsh, RHSM, GSAS ’08, associate academic adviser for the football team.

“He was just such a person of integrity—what you see is what you get, no airs, so genuine—in that sense he was a great role model,” said Cosacchi. “You never felt he was judging, even though he was probably the holiest person I knew.”

Sister Anne said that Father Currie’s self-effacing style helped him gain the trust of the football players—though he wasn’t beyond calling them to the carpet when need be.

“He dealt with issues head on, but he always left the individual standing tall,” she said. “I looked at him as an inspiration on how to deal with students at their most indifferent moments. But he always addressed the cause of their problems; always the issues, never the individual.”

Patrick Ryan, S.J., the Laurence J. McGinley Professor of Religion and Society, worked closely with Father Currie when Father Ryan was vice president for mission and ministry. He called Father Currie a “dynamic” and “sensible” man who “was very good in promoting social justice concerns.” He recalled that when gay students were confronted with hostility, Father Currie came to their defense.

“We wanted to have people speak in a Christian and charitable way to avoid any exiling of people who are gay or different in orientation,” said Father Ryan.

“They [Mission and Ministry] made it a point that whoever was feeling marginalized, those people were most important,” added Cosacchi.  “Whoever was most in need was the priority for Father Currie.”

Cosacchi recalled a homily on promoting social justice around the world that Father Currie delivered at University Church. When he noticed the congregation’s attention begin to wane, Father Currie put his notes aside and drove the point back home.

“And that means that nobody should have to eat alone in the cafeteria!” he said.

A memorial Mass on the Fordham campus will be planned for a future date. To see an interview of Father Currie with Father Ryan, click here.