Fordham University and its Board of Trustees mourns the loss of Ann Mara, matriarch of the New York Giants football dynasty, “The First Lady of Football,” and longtime friend and supporter of Fordham.

Mara passed away on Feb. 1 after complications from a fall. She was 85 years old. 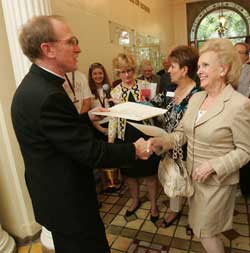 In 2008, Joseph M. McShane, S.J., president of Fordham, presented a citation to Mara (HON ’08), inducting her late husband, Wellington, into the Fordham University Hall of Fame.
Photo by Bruce Gilbert

“We have lost a great woman today, a woman of many talents, and a great soul,” said Joseph M. McShane, S.J., president of Fordham. “She was indeed the first lady of Fordham football, but she was so much more than that: a keen businesswoman; a devout Catholic; a loving mother; a generous philanthropist; and a warm colleague. I know the Fordham community joins me today in mourning her loss, and in keeping the Mara family in our thoughts and prayers.”

Mara was the widow of longtime Giants owner Wellington Mara, FCRH’ 37, whom she met at the church that both attended, St. Ignatius Loyola on Park Avenue. They married in 1954.

Though the couple would go on to co-own the NFL team founded in 1925 by Wellington’s father, Tim, Ann and her husband’s earliest shared experiences of football began at Fordham. Wellington, a diehard Ram and a classmate of Vince Lombardi, would frequently bring Ann to University sporting events.

“During our courtship, [Wellington] dragged me to every football game and every basketball game,” Mara said when she accepted Fordham’s 2012 Walsh Award, given each year to an individual who best exemplifies the support, loyalty, and passion for Fordham football. “That was his idea of a romantic night.”

Through the years, the couple remained well-connected to Fordham: their son John Mara, the Giants’ president and CEO, is a 1979 graduate of Fordham Law School and several of their grandchildren attended the University. Both Ann and Wellington received honorary degrees from Fordham and Wellington Mara received one of the University’s first Founder’s Awards in 2002. In 2012, Ann received Fordham’s Walsh Award, given each year to an individual who best exemplifies the support, loyalty, and passion for Fordham football.

In conferring an honorary doctorate of humane letters upon her in 2008, Fordham said of Mara, “She is the matriarch; literally as a mother, grandmother, and great-grandmother, and figuratively, for the extended New York Giants family, a family that includes scores of players and hundreds of Giants alumni. Indeed, through it all: the defeats, the personal losses, and the memorable triumphs, Ann Mumm Mara has been there.”

Equal to Mara’s love of Fordham was her passion for the Giants. Called the “Grand Dame of the New York Giants,” Mara and her 11 children maintained their 50 percent ownership of the organization following Wellington’s death in 2005.

“Mrs. Mara was a tower of strength, dignity, and inspiration for her family and all of us in the NFL,” said NFL commissioner Roger Goodell, in a statement. “Her family and the Giants organization have always reflected Mrs. Mara’s competitive spirit, integrity, and wonderful sense of humor. Our thoughts and prayers are with John Mara and the entire Mara family.”

Mara is survived by 11 children, 43 grandchildren (among whom are well-known actresses Rooney Mara and Kate Mara), and 16 great-grandchildren.