skip to main content
Return to Fordham University
You are at:Home»Inside Fordham»Fordham Jesuit Tapped to Lead New York Province of Society of Jesus 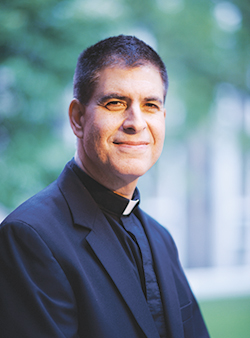 John J. Cecero, S.J., associate professor of psychology at Fordham and former rector of the Spellman Hall Jesuit community, and member of the Fordham Board of Trustees, has been appointed by Father General Adolfo Nicolás, S.J., to be the provincial of the New York Province of the Society of Jesus.

Father Cecero, who will be leaving Fordham after 15 years, will begin his term on July 31, 2014.  On July 31, 2015, when the New England Province and the New York Province are united, he will become the provincial of the new combined province.

Overseeing the merger will be both a big challenge and an opportunity as provincial, said Father Cecero. There are 320 Jesuits in the New York province and 240 in the New England province. They reside at colleges, high schools, parishes, and retreat centers stretching from Jersey City to Portland, Maine.

“The real challenge is going to be trying to find ways to move us toward that one unified province with a common vision and purpose, and really set in place structures and relationships that will foster that,” he said.

Although there are cultural differences spanning the region, there is also a great deal of overlap between the two areas, he said. Before he joined the Fordham faculty, he completed his theological studies at the Weston School of Theology in Cambridge, Ma., and interned as a psychologist in Boston.

A licensed clinical psychologist and director of Fordham’s Center for Spirituality and Mental Health, Father Cecero became a member of the Society of Jesus in 1976 and was ordained in 1989 in the Maryland Province.

He is presently enjoying a sabbatical year, where he is visiting Jesuit communities and spending quality time with his family and friends.

As rector, he oversaw the emotional, spiritual and physical well-being of the approximately 32 Jesuit residents there, and managed the operating budget for the facility. That role, which he took on in 2007 and completed in June 2013, has prepared him for this new assignment, in which he plans to focus on fostering more of a sense of community life.

“In the past, Jesuits had tended to think about community as kind of the place where you hang your hat, while the real action, the real living out of the Jesuit vocation, was outside of the community,” he said.

“But the last general congregation—wisely, I think—changed our thinking about that and said, ‘No, we really have to work on making our [living]communities places of prayer and companionship that support the work that we do. Out of that flows a sustained commitment to both ministries that we presently have and to envisioning new ministries we might undertake.”

Father Cecero introduced initiatives at Fordham that he wants to bring to the larger Jesuit community, including annual community retreats and a committee structure that will enable all members of the Society of Jesus to take responsibility for the life they live together.

After 16 years at Fordham, Father Cecero says he’ll miss his colleagues in the faculty, administration, and the Board of Trustees. But he noted that it’s an exciting time to be in a leadership position within the Society of Jesus, thanks to the elevation of fellow Jesuit, Pope Francis.

The “Francis Factor” comes when the Pope exhorts pastors in the church to “bear the smell of the sheep” and really get their hands dirty. His enthusiasm and his love of the poor has generated a great deal of enthusiasm and interest and hope within the church, he said.

“That’s really inspiring for people, and I can’t help but think that that’s going to continue to inspire vocations and support for what we do,” he said.