At a ceremony at the Rose Hill campus, members of the Fordham and local Orthodox communities gathered to honor the addition of the Father John Meyendorff & Patterson Family Chair of Orthodox Christian Studies as well as its inaugural holder, George Demacopoulos, PhD, co-founding director of the center.

“Being named the inaugural holder… is a profoundly humbling honor,” said Demacopoulos, a professor of historical theology. “[Father Meyendorff] pioneered Orthodox Christian Studies as its own intellectual enterprise—not just at Fordham but throughout the American academic community.” 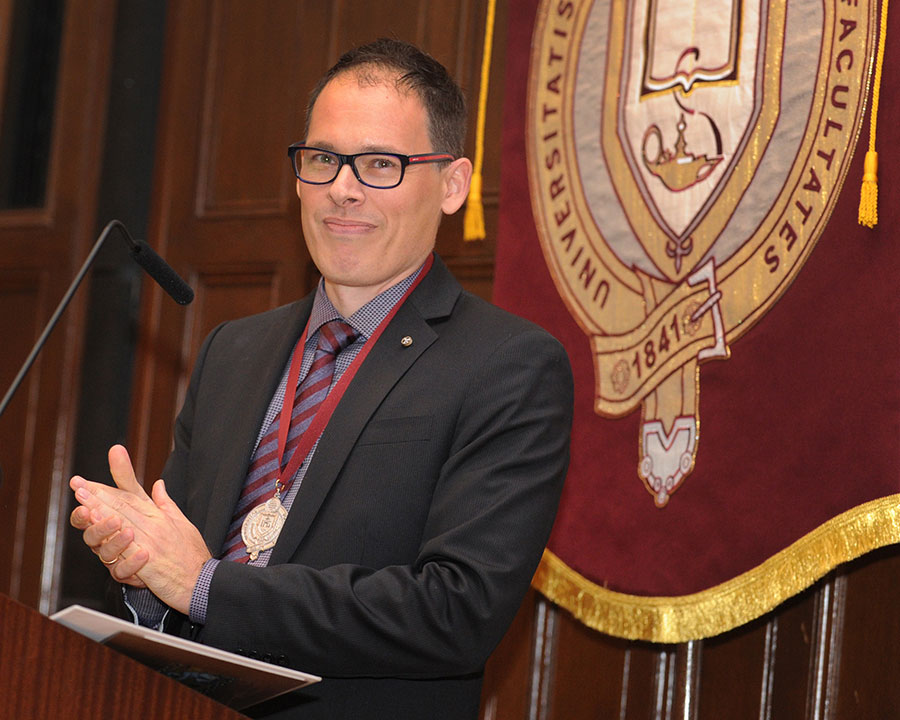 A gift from Solon and Marianna Patterson, the chair supports scholarship and teaching on the relationship between Eastern Orthodox and Roman Catholic traditions. It is named for both the Pattersons, who also endowed the Patterson Triennial Conference on Orthodox-Catholic Dialogue, and Protopresbyter John Meyendorff, a professor of Byzantine history at Fordham from 1967 to 1992.

Though originally a religious holiday, the feast took a political turn around the year 614, when Byzantine emperor Heraclius appropriated the symbol of the cross for his military pursuits, infusing Orthodox religious piety with a healthy dose of militarism.

This bellicose spirit found its way into some of the liturgical hymns sung on the feast day—songs like Soson Kyrie, which prays for God, through the cross, to “grant victory to the emperor against the barbarians.”

The problem with these hymns, Demacopoulos said, is that they made a lasting impact on the churchgoers who sung them. Like any a song that “gets stuck” in one’s head, these catchy tunes lodged in the collective Orthodox subconscious and infected it with a warped political understanding of religiosity.

“New advances in cognitive science and musicology have demonstrated that music affects our brains more powerfully than other sensory stimulate,” he said. “Short, bold, and catchy hymns like Soson Kyrie perfectly fit this model.”

Centuries later, this canon of militaristic hymns and its “errant political theology” still endure among some Orthodox Christian groups and political opportunists.

“Hymns like Soson Kyrie help to sustain an imperialized and militarized version of Orthodox Christianity,” Demacopoulos said. “Left unchecked, this sentiment can fuel a radical populism of intolerance and ignorance.”

This, he continued, is why many traditional orthodox countries today struggle with “a kind of religious nationalism that is nostalgic rather than genuine and xenophobic rather than Christian.”

The irony, he argued, is that these hymns belie the modern Orthodox “narrative of victimization” at the hands of Western Christians. That narrative relies on the assumption that only Western Christian Crusaders sank to the level of “sacralizing violence” in the Middle Ages.

That claim simply isn’t true, he said. Moreover, the difficult task of striving for peace will require cooperation on the part of both the Eastern and Western churches. 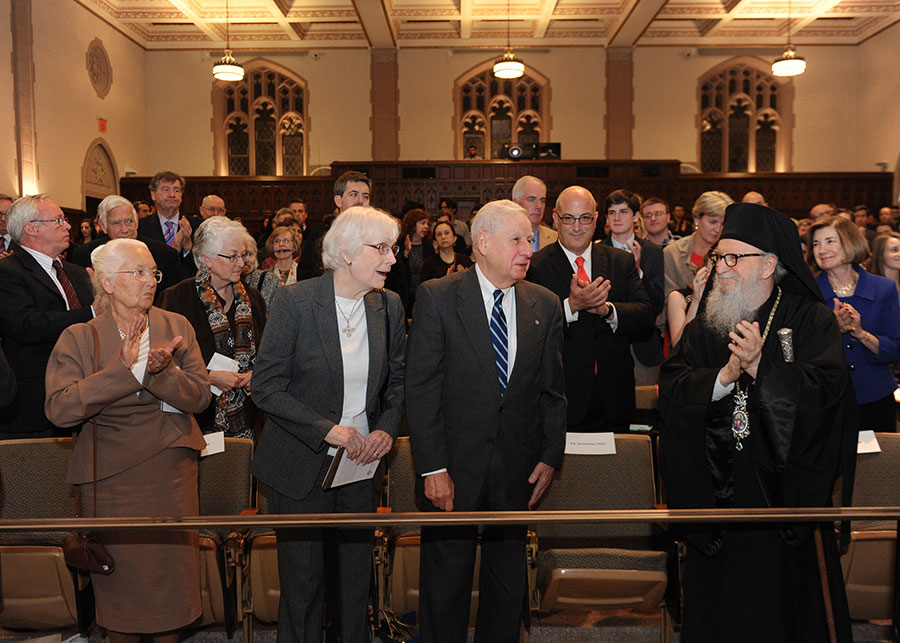 “If we have any hope in addressing the unprecedented challenges that lie before us—terrorism, school shootings, refugees, poverty, ecological destruction—the way forward can only be one of Christian unity,” Demacopoulos said. “And, on the Orthodox side of things, this can only begin if we have the courage of faith to shed the naïve presumption that the Byzantine Church never made mistakes.

“The Byzantines knew that different times called for different hymns—that is why they constantly produced new hymns that spoke to their present. It is time we did the same.”

The Meyendorff/Patterson Chair joins the Orthodox Christian Studies Center’s Archbishop Demetrios Chair in Orthodox Theology and Culture, which was created by the Jaharis Family Foundation and is held by Aristotle Papnikolaou, PhD, senior fellow and co-founder of the center.