On June 24, exactly 175 years after opening as a small Catholic college serving only six students, Fordham University commenced a yearlong celebration of its storied history, its highest ideals, and the legacy of its Irish immigrant founder who sought to bring wisdom, learning, and opportunity to a downtrodden population.

With the founding of Fordham, first known as St. John’s College, “the great story of Catholic higher education in the Northeast began,” said Joseph M. McShane, SJ, president of Fordham, who celebrated the Mass. “The cathedral is one of the other gifts that John Hughes gave to the church, the city, and the country, and it is fitting therefore that we gather here, near his tomb, to celebrate what he did for us.”

“In this year, as we celebrate our storied past, we will also focus on the promise of our next 175 years,” said Maura Mast, PhD, dean of Fordham College at Rose Hill, in remarks following the service. “Our story is the story of generations of students, educators, and alumni who believed in the power of a Fordham education to transform lives, and who gave heart and voice to our guiding principle, wisdom and learning in the service of others.” 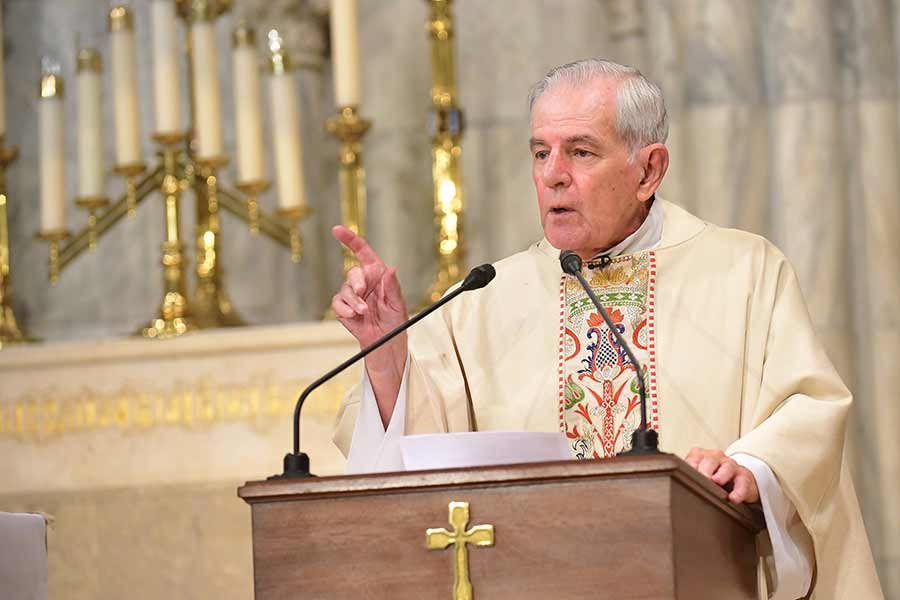 The Fordham story began with Archbishop Hughes’ dream of helping immigrants and Irish Catholics who faced poverty and prejudice in both Ireland and America, as Msgr. Thomas J. Shelley, GSAS ’66, explained in his homily at the Mass.

“He considered education the indispensable means for the members of his immigrant flock to break loose from the cycle of poverty that ensnared them, and to take part in what today we would call the American dream,” said Msgr. Shelley, professor emeritus of theology and author of Fordham, A History of the Jesuit University of New York: 1841-2003 (Fordham University Press, 2016).

He described Archbishop Hughes’ “begging” in New York and Europe to pay for the college’s original 106 acres and for the building renovations that were needed. The struggles continued after the college opened its doors on June 24, 1841, at Rose Hill Manor, in what was then Westchester County. The diocesan clergy members running the college were repeatedly called away, and the college had four presidents in five years before the Society of Jesus took over in 1846.

Archbishop Hughes also had to face down the prejudices of his time. In 1844, he showed his “tough and feisty” side when he told the nativist mayor of New York City that he would turn the city into “a second Moscow”—destroyed by Russians during Napoleon’s 1812 invasion—if a nativist mob attacked the city’s Catholic community (as it had recently attacked Philadelphia’s). The nativists backed down.

After the homily, Father McShane noted that Archbishop Hughes distributed muskets to area Catholic churches and schools for protection. Two sat in the Fordham president’s office for many years until one president gave them to a friend, he said. 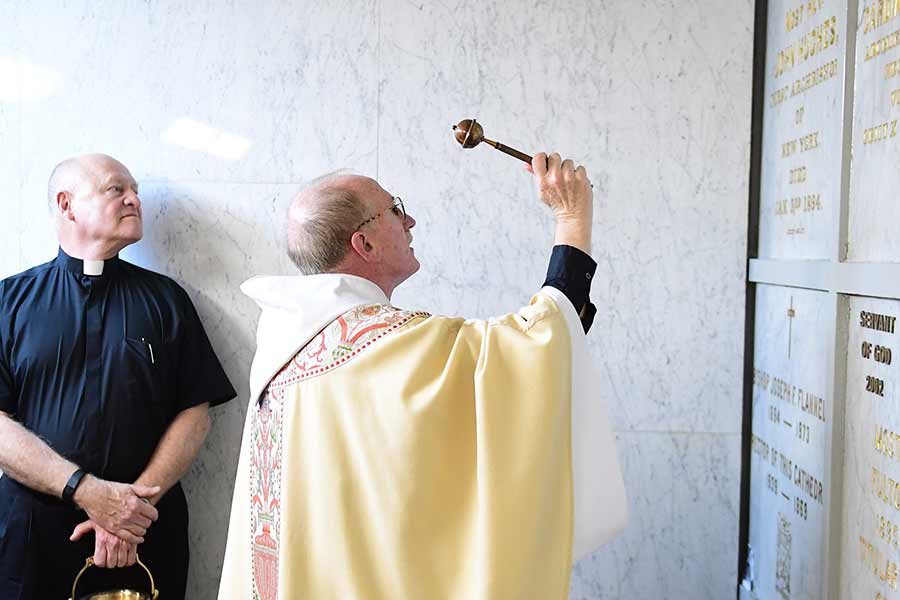 Msgr. Shelley also cited Archbishop Hughes’ words: “‘I have always preached that every denomination, Jews, Christians, Catholics, Protestants—of every shade and sex—were all entitled to entire freedom of conscience’” without hindrance. The words, Msgr. Shelley said, were effectively endorsed by the Second Vatican Council in the following century.

“I do not think that the influence of John Hughes on Fordham University is limited to the past,” he said.

After the service, Father McShane spoke of “all that we have to live up to.”

“We have to live up to the fact that [Archbishop Hughes] left us an institution that from the very start was precarious—founded on faith, sustained by love, aimed at transmitting wisdom and learning so that people would serve others and do the world a world of good; that is to say, set the world on fire and transform other hearts.”

Fordham University Board of Trustees Chairman Bob Daleo, GABELLI ’72, noted the progression of Fordham from “six students and two buildings” to the University it is today, with three campuses, an academic center in London, about 15,000 students, and academic partnerships worldwide.

“Today we do honor the achievements of the past, but we truly celebrate the opportunities of Fordham’s future,” he said. “In doing so, we rededicate ourselves to sustaining Fordham not simply as an institution but as a way of life.”