skip to main content
Return to Fordham University
You are at:Home»Living the Mission»Fordham Asked to Deepen Partnership to Educate Jesuits
Mark Ravizza, S.J., presented a new partnership to Fordham faculty and administration on May 8 at the Rose Hill campus.
For more than 50 years the Society of Jesus has sent many of its newest members to study at Fordham. After two years as novices, new Jesuits take vows and embark on a three-year period of academic studies in philosophy and theology. These so-called “First Studies” represent the initial stage in a long arc of scholarly training for Jesuits. After First Studies, scholastics engage in full-time ministry for two or three years before matriculating into the M.Div. degree at one of the Society’s theologates.  Since 1954 Fordham has been a place where Jesuits have done First Studies.

Last week, the leadership of the Jesuits in North America invited Fordham to deepen that enduring partnership by creating an innovative degree that will prepare its members for increasingly challenging missions.

“Right now, we have four dimensions of formation that are somewhat disconnected. Each of them is good, but we would like to encourage more integration,” he said.

Although Jesuit scholastics will continue to attend philosophy and theology classes at Fordham, Father Ravizza said that the Jesuits are working with Fordham to create a new interdisciplinary master’s degree, which will weave those fields together with the humanities and social and natural sciences.

“I am thrilled that the Society of Jesus is asking Fordham to deepen a long-standing relationship,” said Joseph M. McShane, S.J., president of Fordham.

“It is a testament to the confidence the Jesuits worldwide have in the Fordham faculty, who have provided younger Jesuits an exceptional education. We are excited to move forward with a spirit of collaboration and mutual interest.” 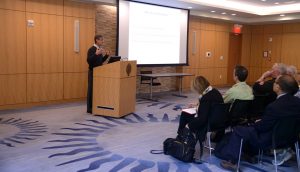 The new degree is tentatively slated for a fall 2021 start.

Ravizza agrees: “It is precisely the quality of the faculty, their deep care for Jesuits over the years, and their capacity to think creatively about ways to make a great education even better that make us look to Fordham. The opportunities of New York are tremendous, and the Bronx is an excellent place for our younger men to understand the needs of the world.”

The endeavor is the result of an assessment of the formation process that the order began in 2004, at the direction of then Superior General Adolfo Nicolás, S.J. The Society undertakes this sort of reflective process periodically, Father Ravizza said, with the goal of better preparing its members for mission in a changing world.

In recent surveys of Jesuits in formation and the partners with whom they work after their training, it was found that Jesuits are generally well prepared to serve in their traditional educational and pastoral apostolates.  However, they are not as ready to meet some of the newer challenges of their contemporary mission, such as promoting dialogue with other faith traditions, engaging varied cultures, and fostering care of our environment. He said this new degree will help them deal with these challenges.

Father Ravizza also hopes that the program will enhance existing connections with residents of Belmont. Jesuits in training currently reside in Ciszek Hall, just south of the campus across East Fordham Road.

“We’re asking ourselves: do we really have a heart for the poor? The data indicated that we definitely have room to grow in this area. Part of the hope of this new program is to have the men more closely connected with the lives of those who are suffering on the margins,” said Father Ravizza.

“Belmont is a community where we can be in touch with that reality.”

The program is tentatively slated for a fall 2021 start, pending the standard University governance processes—including faculty input, review, and approval—and approval by the New York State Education Department. Father Ravizza said he is excited by the warm reception the project has received from faculty, who will be involved in creating new pedagogies for the degree.

“Fordham has a very talented group of faculty who have been energized by this project. Given the creativity, enthusiasm and spirit of collaboration they have brought to our conversations, we have every confidence that this is going to be a wonderful next step in our expanding partnership with Fordham,” he said.