skip to main content
Return to Fordham University
You are at:Home»Colleges and Schools»Fordham College at Rose Hill»First-Year Students Dig Deep at Urban Plunge
Photos by Tom Stoelker
At the start of the school year, as in years past, teams of Fordham’s incoming first-year students fanned out across the Bronx and Manhattan to do community service as part of Urban Plunge, the pre-orientation program run by the Center for Community Engaged Learning.

“We have students attend a wide variety of sites so that they receive a rich experience and they are encouraged to continue to engage throughout the year, either through the center or on their own,” said Candace Johnson, assistant director of operations and evaluation at the center. 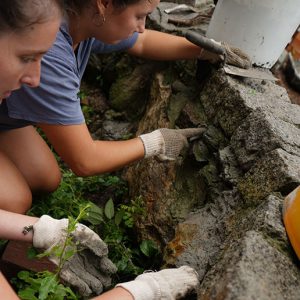 Up in the Bronx, students from the Rose Hill campus stood in the rain in the West Farms neighborhood waiting for the gates of Drew Gardens to open. Nearby, the Bronx River swelled, providing ambient noise to compete with the traffic on Tremont Ave. Students played team-building exercises to pass the time. Despite the wet weather, spirits were high.

Nick Suit, a Gabelli School of Business student from Abington, Pennsylvania, said the group had already been through training that included readings and group discussions about the borough’s sometimes-tumultuous history. They talked about what it means to volunteer in underserved communities and how to listen before helping. They also parsed the difference between intentions versus impact. Sometimes, good intentions can come across the wrong way, he said. However, focusing on impact can make all the difference. He gestured to a tree he was planting with Aidan Avel of Poolesville, Maryland, and Kate West of Fishkill, New York.

“This tree can have an impact; maybe one day a kid from the neighborhood can read a book next to it,” he said. “Maybe years later it’ll be big enough that a community event could happen under it.”

Mario Figueroa, at left, explains the history of the garden to students.

Under a mild drizzle, Mario Figueroa, a volunteer with the garden, guided the students past meandering boxwoods and pear trees laden with fruit. He told students the garden has come far from the bad old days, but they remain vigilant about upkeep. He said that the park was once a de facto garbage dump and a haven for drug addicts, known to the locals as “Zombie Land.” The community pulled together to clean the area, but people still toss garbage into the park and volunteers remain vigilant about keeping drug use out. 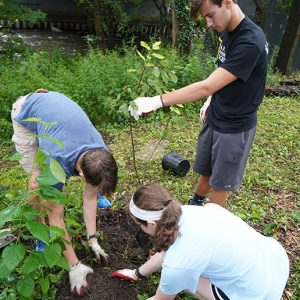 Students planted trees throughout the garden.

Figueroa told them that the area is facing a housing shortage and gentrification has become a looming threat to long-time residents who created the garden. He then invited students to come back as often as they like to participate in barbecues, yoga, or gardening. Next, he broke the students up into groups. Some set out to plant trees, others to plant shrubs by the river, and others mixed cement help create a pond for koi to swim.

Keegan Roeder, a new Fordham College at Rose Hill student from East New Brunswick, New Jersey, said he’d never been north of Yankee Stadium in the Bronx, but the area reminded him a bit of Northern Manhattan neighborhoods he’s visited, like Washington Heights, where people are “just working and living.” He said he was aware of negative perceptions of the Bronx, but he didn’t buy into them. The garden was a perfect example.

“I like the way this community takes pride in refreshing this place, they’re not complacent and they’re eager to make change,” he said.

He added that the program made him rethink the manner he’d do service in the future.

“You can’t help people without enlisting the guidance of people who live there,” he said.

Lily Kissich of Los Angeles, also at Fordham College at Rose Hill, agreed. She drew the distinction between service versus engagement.

“You need to learn about one another,” she said. “If you engage, then it’s more than just going to volunteer one time, you’re more invested, you come back.”