“The fact that the two processes were simultaneous—a more global sense of church and the end of Catholic Christendom—seems to me the key thing that we’re grappling with,” said John T. McGreevy, PhD, professor and dean of the College of Arts & Letters at the University of Notre Dame.

McGreevy’s talk, “How We Are (or Are Not) Church Today,” was the keynote speech at Our Inheritance: Vatican II at 50, a two-day event sponsored by the Fordham Center on Religion and Culture (CRC).

In detailing the ways that the end of Catholic Christendom is intertwined with the rise of globalization, McGreevy characterized the church as the first “truly global institution.” During a 15-year span in the 19th century, members of the Society of Jesus, for example, established outposts in Syria, Calcutta, Argentina, India, China, Canada, Madagascar, Algeria, and Australia.

He said that Catholic globalization peaked in the 19th century, when members cultivated a rigid distinctiveness and a sense of the church of the as a haven in a hostile world. Missionaries promoted an international “Catholic style,” categorized by traditions such as devotion to the Sacred Heart, Lourdes grottos, and Baroque-style churches.

World War I, he said, disrupted it. 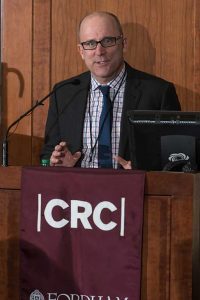 In the 20th century, Karl Rahner, SJ, further advanced the idea of a global church, noting that the Second Vatican Council promoted more cultural flexibility when it came to the liturgy and more independence for individual churches.

“Rahner recognized that a global Catholic sensibility would emerge ‘diffidently,’ … wary of a Vatican with what he termed ‘the mentality of a centralized bureaucracy that thinks it knows best,’” McGreevy said.

“Catholic leaders now veer between assessing the churches’ diminished prospects in a secular Europe and an increasingly secular North and South America, while hoping to propel Catholic growth in Africa, India and China.”

At the same time the church was becoming truly global, it was also undergoing a revival, with a surge of vocations in priesthood and women’s religious orders. It was fueled by members who were committed to building a shared Catholic culture across national borders via local parishes, political parties, labor unions, fraternal organizations, and schools.

“The ideal type of person … was not an intellectual or a mystic. Instead, he or she was a virtuoso institution builder—a skill we value less than we used to, and certainly less than we should,” he said.

“These Catholics built institutions out of an initial sense that only such an institution could protect the faithful in a nationalistic age often unsympathetic to an international church. They were right to do so. But precisely their successes as institutional builders, and the successes of the children propelled from the Fordham’s and Fordham Preps of the world, made this milieu seem less crucial.”

The collapse of Catholic Christendom has many causes, he said—from the aspirations of women and their disappointment in the church, to social mobility, demographic changes, the sexual abuse crisis, broad assimilation in the culture, and a general suspicion of authority figures. Outside of sub-Saharan Africa, the story of the church is one of hollowing out.

“Neither Benedict nor Francis can recreate the dense institutional culture of the Catholic revival,” McGreevy said. “No Pope could.”

“But it’ll be interesting to see if Francis’ focus on the church as a field hospital forges a post-conciliatory model, or if it is . . . a church intelligible to each generation,” he said.