Gustavo Gutierrez, OP, whose seminal book A Theology of Liberation: History, Politics, Salvation; the Power of the Poor in History, (Maryknoll: Orbis, 1973) provided the blueprint for liberation theology, received the University’s highest honor at the Lincoln Center campus on May 6.

“Because you are for us a source of hope, a living saint in the church, a man who has helped to shape the conscience of many, many generations of theologians, and [a man who has]brought excitement to the life of faith for many of us, it is a joy for me to bestow this upon you,” he said.

In a conversation, “The Imperative of Hope: Recovering the Prophetic in Christian Life Today,” Lee and Father Gutierrez touched upon an array of issues related to liberation theology, which is an interpretation of Christian faith through the poor’s suffering, struggles, and hopes. 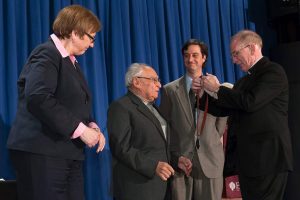 Father Gutierrez, who like Pope Francis hails from Latin America, has been asked by the pope to be a lead expert on the Holy Year of Mercy, which will take place beginning Dec. 8 of this year—and an indication of how seriously liberation theology is being taken at the Vatican.

And while Father Gutierrez said he’s happy that Francis is pope, he said he’s concerned about the challenges he faces.

“Above all, it is a call for us. We must avoid expecting [changes], as more-or-less neutral persons. I think the witness of Francis is a call for our commitment,” he said.

He agreed with Lee that liberation theology is not a monolithic entity and that it varies depending on the context in which it is embraced. It’s more helpful to think of it as tool that has been used by oppressed groups such as African Americans and feminists in their struggles, he said. The “liberation” in the name simply means salvation.

“If we are looking at the Bible, the question of the poor is so strong. From the Old Testament to the New Testament, it is very clear. We have the parable of the Samaritan, [and]all the way to the day of the last judgment it’s very clear the poor were always important in the history of the church,” he said.

He also expounded on the phrase “preferential option for the poor,” which has made its way into Papal Encyclicals and which he said comprises 90 percent of liberation theology. The key, he said, is to understand that making extra efforts to help the poor does not make the church any less open to others. That responsibility also extends to the poor themselves, a lesson he noted they sometimes ignore too.

“The love of God is not only for one sector of humanity, it is everyone. It is not in contradiction with universality to show preference for these people,” he said, citing the Gospel of Matthew in which Jesus says ‘Whatever you did for one of these least brothers of mine, you did for me.’

Lee asked Father Gutierrez to comment on institutional violence such the police shootings in Baltimore and Ferguson, and on what role liberation theology can play in alleviating it.

“Poverty is the first violence,” he said. “It’s a violence because it doesn’t let people rise to the level of persons and [it]denies them the right to eat [and]the right to be happy.”

He professed he is more interested in the future of the people of his native Peru and the church as a whole, than in the direction liberation theology takes. For him, theology is a love letter to both.

“Liberation theology is helping wake the consciousness of Christians about the relevance of the poor in the message of Jesus Christ,” he said.