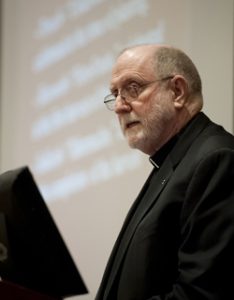 To be a true Jew, Christian, or Muslim, it helps to have the soul of a traveler, Patrick J. Ryan, S.J., said on Nov. 13 in a lecture at the Lincoln Center campus.

“Pilgrimage is not the same in each tradition, but in many ways all three faith traditions map their world in what I characterize as a geography of faith, largely as a result of their pilgrimage traditions,” he said.

Father Ryan, the Laurence J. McGinley Professor of Religion and Society, delivered “To Be a Pilgrim: A Geography of Faith for Jews, Christians, and Muslims,” the annual fall McGinley lecture, at both the Lincoln Center and Rose Hill campuses. His talk traced the historical origins of the most familiar pilgrimages associated with the three religions, and the theological underpinnings for the destinations.

Jews, for instance, have been acculturated in many different backgrounds over the centuries, but have continued to turn to God in the direction of the hill of Zion in Jerusalem where the Holy Temple once stood, Father Ryan noted.

Judah Halevi, a poet/scholar who lived in Spain in the 11th and 12th centuries, epitomized this devotion in his assertion of superiority of the Jewish homeland.

“In this geographical and theological centeredness, Halevi continues the tradition of many other ancient and medieval writers—Hellenistic, Christian and Muslim—who constructed geographies of various climes proving that one or another homeland provided the world with its true center,” Father Ryan said.

“One thinks, in this connection, of the famous 1976 cover drawing by Saul Steinberg for The New Yorker portraying a true New Yorker’s map of the world as seen from Ninth Avenue.”

Christian pilgrimages focus on the nearby Church of the Holy Sepulcher in Jerusalem, which commemorates both the death and the resurrection of Jesus. The Bible recounts many instances in which Jesus made pilgrimages himself.

Father Ryan also noted that the Crusades, notwithstanding the brutality that tarnished them, were at the time considered a pilgrimage.

The lure of Jerusalem’s Mount of Olives also greatly affected Society of Jesus founder Ignatius of Loyola, said Father Ryan. During a visit in 1523, he slipped away to visit markings on a stone in the floor that were said to be the footprints Jesus left behind. Ignatius was arrested and forced into a “perp” walk for his disobedience, but said it was worth it.

“Ignatius remained, to the close of his days, ‘the pilgrim,’ the term he used for himself,” Father Ryan said.

In Islam, pilgrimage is one of the five pillars of the faith; all Muslims are required to make the hajj to Mecca in Saudi Arabia at least once.

They also face Mecca in worship five times a day; within Mecca they face the Masjid al-Haram, the Sacred Mosque; and within the Sacred Mosque they surround the empty and windowless cubic building at its heart, the Ka‘ba, which is said in some sense to be “the House of God.”

“For many Muslims the hajj also serves as an education in Islam—either a deepening of what is already known, or an introduction to those elements of the Islamic tradition that have never been emphasized or understood in the previous life of the pilgrim,” he said.

Unlike imaginary lines of latitude and longitude, pilgrim routes map the real world, he said. And when we meet each other at the intersections of those routes, we should “walk in peace.”

“On my journey as a Christian—and on your journey as a Jew or as a Muslim—let us look across at each other, from my path and from your path, and see a fellow pilgrim,” he said.