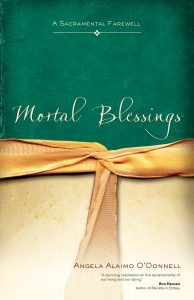 Angela Alaimo O’Donnell hadn’t planned to write a book about the last 48 days of her mother’s life.

But after a 2010 essay that she wrote for Commonweal Magazine received positive feedback, she decided to revisit the topic. The result, Mortal Blessings: A Sacramental Farewell (Ave Maria Press, 2014), is equal parts memoir and meditation about the short but intense time when her mother Marion suffered a fall and died 48 days later.

As O’Donnell and her sisters tended to her mother in the hospital, she began to see connections between the rituals that they practiced every day and the sacraments of her Catholic faith. Going through the motions of helping her mother ride around the hospital in her wheelchair, or feeding her a piece of pie, helped ease the trauma, she said, even if the rituals were unspoken at the time.

“I thought I’d meditate on the nature of sacrament, and the ways in which human beings, whether they’re Catholic or not, devise rituals to get us through difficult situations,” she said.

“I’d read a lot about sacramentality, and thought I could incorporate all of these elements theoretically. But I realized as I was writing it that unless it was tied to something concrete, readers were not going to be very interested in something abstract and theoretical. Who cares about a book like that when you’re talking about the experience of watching someone die?”

In addition to the Catholic Churches’ seven sacraments, O’Donnell added additional ones, such as the “sacrament of the cell phone.” She also sought and received permission from her sisters to reveal details that would not have otherwise been revealed through poetry. Details like the fact that, her mother was not a, shall we say, an easy-going sort.

“We didn’t see eye-to-eye with her on anything,” she said.

“I felt privileged to be back there in these circumstances, where really there was an unspoken forgiveness of all the years of neglect, and the years of being at odds with each other just sort of disappeared.”

The chapter that she would call “the sacrament of the beauty” was the breakthrough chapter for her. O’Donnell’s mother was devoted to beauty in her own way, and she said she and her sisters did all they could to help her by decorating her hospital room.

Caring for someone who cared for her when she was a child also made O’Donnell realize that the tables could very well be turned later in life. And although her normal response would be to not make herself too much of a burden, she said her mother’s “spunk” made her rethink this attitude.

“One of her favorite expressions was, ‘I’m the important person here.’ That used to drive us crazy. But when she was sick and really needed help, I kind of admired that she just demanded to get attention. She wasn’t just going to lie there and be neglected,” she said.

“She was terribly diminished by what was happening to her [but]her spirit wasn’t diminished. I admired that in her, and I hope we all have a little bit of that undiminished spirit in us.”