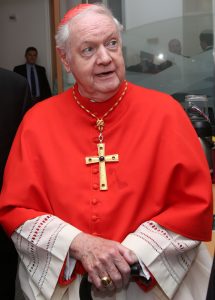 The Fordham community mourns the death of Cardinal Edward M. Egan, Archbishop Emeritus of New York , a steadfast friend of the University and one of the community’s guiding moral authorities.

The cardinal, who passed away on March 5, was a frequent guest at Fordham events, where he offered many invocations at the annual Fordham Founder’s Dinners and presided over Masses on both campuses.

He was the recipient of an honorary doctorate of laws in 2001 and a President’s Medal in 2008.

“Cardinal Egan was a true son of the Church,” said Joseph M. McShane, SJ, president of Fordham. “He was the good shepherd to his flock, the elder statesman to his peers, and the steady leader of his archdiocese.”

“He was passionate about education, and about improving the lives of the most disadvantaged New Yorkers. He was a good friend to the Society of Jesus, and held a special place in his heart for Fordham. He combined great expertise with great humility, and he was one of the kindest men I’ve ever known.” 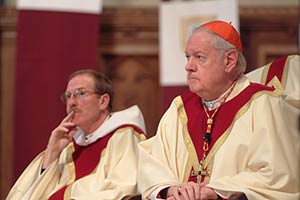 Father McShane, left, and Cardinal Egan at the rededication of University Church in 2004.

“He will be sorely missed by the Church and the city that he loved, and by all who were fortunate enough to cross his path,” said Father McShane. “I know the Fordham Family joins me in keeping Cardinal Egan in their thoughts and prayers as we mourn his passing and celebrate his life and works.”

Cardinal Egan was born on April 2, 1932, in Oak Park, Illinois. His was ordained a priest for the Archdiocese of Chicago in 1957 and was consecrated a bishop in 1985. From 1985 to 1988 he served as Auxiliary Bishop and Vicar for Education of the Archdiocese of New York. In 1988, Pope John Paul II appointed him Bishop of the Diocese of Bridgeport. In 2000, he was appointed Archbishop of New York and was made a cardinal in 2001. He retired from the post in May of 2009.

The cardinal was the eighth successor to Fordham’s founder, John Hughes. In 2004, Cardinal Egan rededicated the University Church following extensive renovations and blessed the space, tapping his crozier on the church door. In his homily, he recalled Fordham’s tumultuous beginnings and praised the Jesuits who took charge of the school in 1846, calling their work “the finest in higher education.” 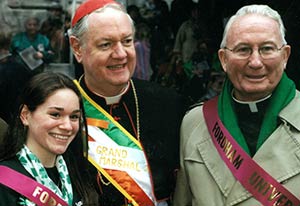 He also bemoaned the nation’s pivot from religion, calling on the University to channel the strength of its founder to overcome challenges facing Catholic institutions of higher education.

“Secularism has become the national religion,” Cardinal Egan said. “Religious concerns are to be kept to oneself…to be made little of to ensure that they do not impede [what society perceives as progress].” Equally troubling, he said, is the skepticism that has become part of the world culture, blurring the certainty of knowing right from wrong. Education that realizes divinity, he said, must have a place in society.

“It’s not easy for Catholic universities to stand square with the teachings taught to us by Jesus Christ,” he said. “There will be ridicule, attempts to marginalize and retaliate, but…if we give in to secularism and skepticism, then we have betrayed our foundation.”

Cardinal Egan thanked Fordham for “being a beacon here on a hill.” He said the Catholic Church “couldn’t be here without you,” citing the hundreds of Fordham graduates who are leaders in education and in the church throughout the world.

The cardinal earned his doctorate in canon law from the Pontifical Gregorian University in Rome and participated fully in the intellectual life of the church, as well as, occasionally, at the University. In 2001 when he received his honorary degree, he delved into the minutia of the natural law at a colloquium on subject.

Natural law is the intuitive law of reason that gives priority to basic human good, he said. It has been defined and redefined in religious, philosophical and moral contexts throughout history.

The cardinal then went on to chronicle the evolution of natural law from the Roman philosopher Cicero, who in poetic verse called it “a true law which is right, where reason is in harmony with nature,” to contemporary political philosopher John Rawls, who in contrast suggested people “set aside religion, philosophical and moral views when determining if a law is valid.”

Today, varying definitions are still batted around and should be carefully considered so as not to strip natural law of its essence as the nature of reason, he said.

“We can make valid judgments…with pure reason,” he said. “These basic principles are part and parcel of Western civilization and shouldn’t be lost.” 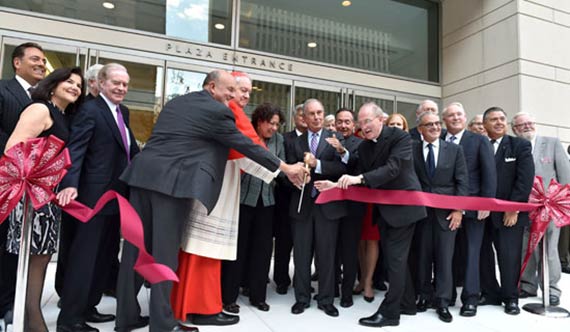