skip to main content
Return to Fordham University
You are at:Home»Living the Mission»On Easter, Fordham Welcomes Converts to the Catholic Faith

Growing up in Mahwah, New Jersey, Carol Jeong had a vague familiarity with Christianity. Her mother occasionally took her to church, and when she gave her an illustrated bible, Jeong gravitated toward the Old Testament, with its epic tales of miracles. Yet she never felt a particularly strong attachment to God. 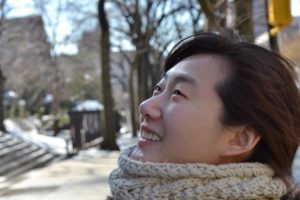 But in 2012, her older sister Michelle, who’d begun re-exploring her own faith, invited her to attend a Christmas Vigil Mass at the Roman Catholic Church of the Korean Martyrs in Saddle Brook. Jeong, a junior majoring in theater at Fordham College at Lincoln Center, remembers the moment the lights dimmed and the congregation sat silent in prayer.

“I’m not exactly sure what happened, but when I was praying, I started sobbing, and I couldn’t stop. That was something so new to me that I had never felt before. It the most exhilarating, amazing, loving, new experience,” she said.

“I realized that I wanted to be Catholic.”

On Easter weekend, Jeong and five others will do just that in a ceremony at the University Church on the Rose Hill campus. She and two other catechumens will receive the sacraments of initiation (baptism, first communion, and confirmation), while three others who have already been baptized as members of other Christian communities will join the Catholic faith through the sacraments of holy communion and confirmation. 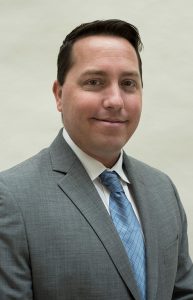 All have participated in the Rite of Christian Initiation of Adults (RCIA) led by the Office of Campus Ministry. Father Mark Zittle, director of University Church Ministries, said the number of catechumens varies from year to year, with as many as 19 one year and as few as three in the next. Students and non-students alike participate.

Connecting with a Fellow Veteran

Like Jeong, Michael Tanner, GABELLI ’17, found himself drawn to Catholicism through a close acquaintance. Tanner, a native of Raleigh, North Carolina, and a veteran of the U.S. Marine Corps, was raised a Southern Baptist but was never baptized. His roommate at the Rose Hill campus, a fellow Marine, participated in RCIA. Although Tanner was busy working full time and getting his bachelor’s degree, the idea appealed to him as well.

Last fall, when he began pursuing an M.B.A. in finance and information systems at the Gabelli School of Business, he also took the RCIA plunge.

“It’s something that I felt was important to me. I can’t really describe it in in one word or sentence; my inner voice just told me this is the direction I need to go,” he said.

Fordham’s Catholic identity factored in his decision to attend, and he said he liked what he learned in his undergraduate classes.

“I like that the Catholic faith has an open mind to other religions. I think it’s the right thing to do. Pope Francis is also an amazing man. I did a research paper on him and realized how he genuinely wants to make the world a better place,” he said.

One Family United in Faith

Jeong’s journey has dovetailed with a simultaneous reawakening in her family. She said her father has been affected the most. A skeptic of organized religion, he recently relented while visiting Jeong in South Korea, and joined her and her grandmother at a Mass.

“That night, he told me he had a dream where God came to him and the next day, when we went to church together, he told me he wanted to be Catholic. And this is after years of squabbling about the church. I was just amazed,” she said.

The RCIA process has taken longer for her than she initially imagined. She said she felt overwhelmed when she compared herself to fellow students who’d spent a lifetime in the faith, and she didn’t feel ready to take the leap.

One lesson she’s taken to heart is that her religion need not be separate from her everyday routines.

“As an actor, I understand my church a bit more,” she said. “I know the reason I’m doing theater is to show that every person who I end up portraying is a real human being.”

“I’m going to take people on a journey to figure out who this character is, what their flaws are, and what their positive points are. I want to convey messages of diversity and acceptance, because that’s really what theater is about.”