skip to main content
Return to Fordham University
You are at:Home»Inside Fordham»Lectures and Events»Dulles at 100: Still a ‘Model’
Above photo by Joseph Lawton; Other photos by Argenis Apolinario
Dozens of scholars came together at the Lincoln Center campus on Sept. 24 to share reflections both personal and profound on the great theologian Avery Cardinal Dulles, S.J.

The daylong symposium, Dulles at 100, celebrated the late cardinal’s birth centennial and kicked off a yearlong reflection of his distinguished life and career.

Cardinal Dulles lived and worked on Fordham’s campus—first as a Jesuit scholastic from 1951 to 1953—and later as the Lawrence M. McGinley Professor of Religion and Society from 1988 until his death in 2008 at the age of 90. 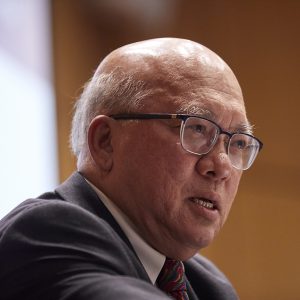 “He was one of the giants of our intellectual and Jesuit communities. One of the finest theologians that the American church ever produced,” said Joseph M. McShane, S.J., president of Fordham. “He was an ambassador who built bridges. He was a gift to us.”

Raised in the Presbyterian Church and educated in Switzerland, at Choate, and at Harvard, Dulles converted to Catholicism and went on to become the first American who was not a bishop to be named a cardinal.

Of her storied teacher and longtime colleague, Sister Elizabeth Johnson, C.S.J., distinguished professor emerita of theology, said “a narrative genre has grown that we might call Avery stories.”

“There are many that I could tell of his endearing, informal interactions with students,” said Sister Johnson, who gave a keynote at the event. “Of his gracious presence as a dinner guest, of his game participation in liturgical dance, of his sense of humor at the most unexpected times, of his ecumenical passion, of his interventions and conferences or faculty meetings that occasioned laughter, frustration, or insight.”

Joseph Komonchak, Ph.D., professor emeritus of theology and religious studies at Catholic University of America, recalled a colleague who drove a car which was rumored to be handed down from his uncle, former CIA Director Allen Dulles.

“He drove that big whale of a car, that probably got nine miles a gallon, with a sticker that said, ‘Fly Dulles,’” he said. 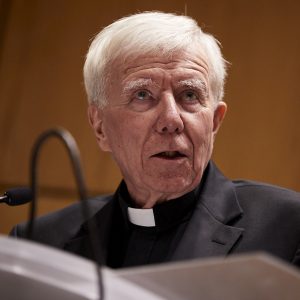 Father Komonchak said though he and Cardinal Dulles diverged theologically, Dulles always responded to an argument by complimenting the strengths of his opponent’s point of view before proceeding to dissect their thesis.

In his seminal 1974 book Models of the Church, Cardinal Dulles laid out six major approaches, or models, through which the church could be explained: as institution, mystical communion, sacrament, herald, servant, and, in a later addition to the book, as community of disciples, which attempted to encompasses the other five. The book became a standard text for many ecclesiology courses.

“He had a very modest view of systematic theology. You will recall that in Models of the Church, he used a somewhat disparaging term, supermodel, for a view that would try to combine the virtues of each of the five other models without suffering their limitations. And he expressed his skepticism that one could find any one model that would be truly adequate, for the church is essentially a mystery. Then, he said, we are therefore condemned to work with models that are inadequate to the realities to which they point,” he said. “I have long disagreed with that view of systematic theology.”

He said that the two exchanged lengthy letters on subject, until Cardinal Dulles came to believe the differences between the two to be so narrow that they were not worth debating.

“I think he also got tired of reading five page single-spaced small print letters from me,” he said. 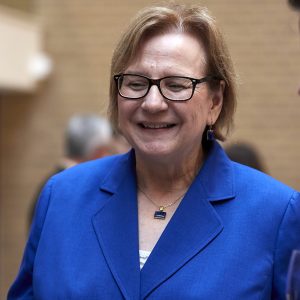 Inspired by Dulles’ models, Peter Phan, Ph.D., Ellacuria Chair of Catholic Social Thought at Georgetown University, argued in his closing keynote remarks that the historical church as we know it would not exist without migrants, though global migration was barely on “Cardinal Dulles’ theological radar.”

In his talk, “Imagining the Church in the Age of Migration,” Phan ultimately concluded that “outside migration there is no salvation.” Riffing on the cardinal’s six criteria, Phan developed his own model by focusing on three points:

In his lecture about migration Phan hit all of those points. He began with shockingly raw numbers about migrants, which he counts separately from the 68.5 million refugees forced to leave their county because of war and violence last year. In 2010, there were 200 million people migrating for a variety of reasons, from floods to food shortages and violence, he said. But mass migration didn’t begin in the 21st century, he said. 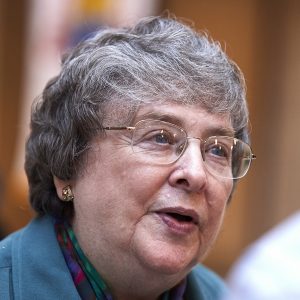 “It has happened throughout history, just look at the slave trade in 19th century, 11 million Africans [faced]a form of forced migration,” he said. “Again, in the 19th century, the Great Migration from Europe brought 200 million people who voluntary moved to the U.S.”

He took issue with President Donald Trump’s assessment that United States is currently “infected” by migration. Eighty-five percent of refugees, not migrants, he said, have settled in the world’s developing nations, such as Turkey, Pakistan, or Uganda—not in Europe and not in the U.S, which recently limited the number of refugees it will accept to 30,000 for next year.

“We are not overrun,” he said.

He added that Western nations also need to remember that they are the primary cause of the crisis.

“Most of this is caused by the wars initiated by the U.S. It’s not just a social-economic issue, it’s a deeply theological and spiritual issue.”

He encouraged students in the room to consider writing the dozens of dissertations necessary to rewrite the history of the church through the lens of migration.

“Each of these migrations produces a new face of the church,” he said.

He noted that in the Archdiocese of Los Angeles, Mass is celebrated in 42 languages and that a parish in the Bronx celebrates Mass in five languages. In Louisiana, the Catholic priests are mostly Vietnamese, he said.

“Without migration, the church as a whole would not exist as catholic. No migration, no catholicity.”