skip to main content
Return to Fordham University
You are at:Home»Inside Fordham»Curran Center for American Catholic Studies Celebrates 10 Years
(Above) From left: Joseph M. McShane, SJ, president of Fordham; Stephen Freedman, PhD, provost; Christine Firer-Hinze, PhD, director of the Curran Center; Mark Massa, SJ, founder of the Curran Center; and Constance A. Curran. (Photo by Chris Taggart)
Connie Curran remembers the first meeting she and her husband John had with Mark S. Massa, SJ, then the Karl Rahner Chair in Theology, about the creation of a center for American Catholic studies at Fordham.

“He said to us ‘My dream for the center is to make it the No. 1 center for American Catholics studies in—’ and he hesitated, then said, ‘in the world!’” Curran recalled.

“We just looked at him, and he said, ‘Maybe that’s a little ambitious.’”

Ten years later, Curran told the dozens of students, alumni, faculty, and benefactors who gathered at the Rose Hill campus to honor that very center, “I think that his vision has become a reality.”

The May 21 gala commemorated the 10th anniversary of the naming of the Francis and Ann Curran Center for American Catholic Studies (CACS) and honored the center’s benefactors, John Curran, PhD, PHA ’66, and Constance Curran. The Currans were awarded with Fordham’s highest honor, the Presidential Medal, which has only been given 30 times in the history of the University.

“Ten years ago no one could have predicted the success and the growth of the Curran Center,” said Father Massa, who is now professor of church history and dean of the School of Theology and Ministry at Boston College.

Watch a video about the Curran Center below
“It takes a visionary group of people to invest in a future that they can’t exactly see. But [the Currans]supported this program when it was literally just a phone and a desk on the third floor of Keating Hall.”

Father Massa had originally established a center for Catholic study at Fordham in 2001, which opened one week after the tragedies of September 11. It remained a small program until 2004 when the Currans, inspired by their close friendship with Father Massa, endowed the center. 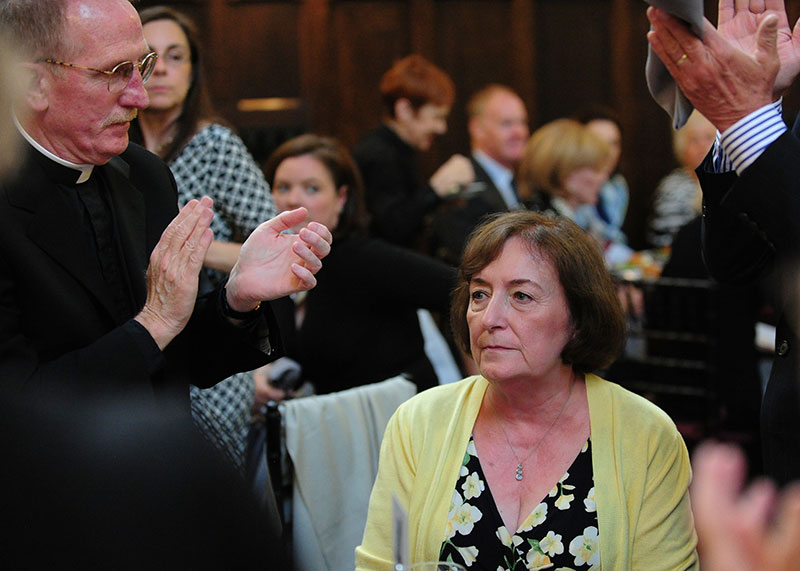 Constance Curran (above) and her husband John were honored with the President’s Medal for their support of the Curran Center.
Photo by Chris Taggart

Since then, the Francis and Ann Curran Center—named in honor of John Curran’s parents—has grown to become a premier hub of Catholic studies. It offers numerous lectures and public conferences that explore diverse topics in Catholicism, including Catholic education, Catholic literature, black Catholic culture, and Latino/a spirituality.

“The CACS community was my family at Fordham,” said Colleen Taylor, FCRH ’12, a graduate of the American Catholic studies program. “It encouraged me to think harder, work harder, and strive more. It was also my rock when my mother was diagnosed with cancer during my senior year.

“Most importantly, it was my family each and every week, when I sat down with my classmates and professor, broke Bronx Italian bread, and discussed what it meant to be Catholic and American both then and now,” she said.

The center is currently in the midst of a three-year series examining Catholic social teaching and the economy. The series will conclude with a major conference in 2016, marking the 125th anniversary of the first papal social encyclical in 1891. As part of the series, the center is also inaugurating its first Visiting Chair in American Catholic Studies.

Read more about the center here.