skip to main content
Return to Fordham University
You are at:Home»Living the Mission»Curran Center Contest Winner Examines History of Slavery 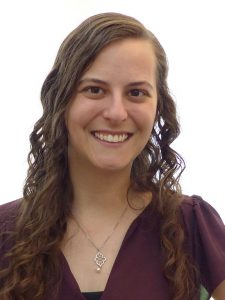 Kelly Schmidt, Ph.D., was disturbed by racism from a very young age.

“I don’t quite remember where I had learned about prejudice and discrimination for the first time, but I didn’t understand it and I kept asking my mom, ‘Why do people treat people differently because of the way they look?’” she said, “And she couldn’t give me the answers.”

“What she did was, she kept supplying me with books, so I was reading biographies of Frederick Douglass, Harriet Tubman, and Sojourner Truth, and all kinds of people who have experienced prejudice and oppression and fought to overcome it. That really stuck with me.”

In April, Fordham’s Curran Center for American Catholic Studies chose Schmidt, a 2021 graduate of Loyola University, as the second winner of its New Scholars essay contest. For her paper “’Regulations for Our Black People’: Reconstructing the Experiences of Enslaved People in the United States through Jesuit Records” (International Symposium on Jesuit Studies, March 2021), Schmidt was awarded a $1,500 cash prize.

“It’s quite an honor for my work to be recognized in this way. It’s so important that this award is promoting new scholarship that focuses on underrepresented and marginalized groups in Catholic history,” said Schmidt, who is the research coordinator for the Slavery, History, Memory, and Reconciliation Project, a joint initiative of the Society of Jesus and St. Louis University.

The research is in some ways the pinnacle of an academic career that began with the books her mother gave her. In high school, Schmidt worked as a volunteer and employee at the National Underground Railroad Freedom Center in Cincinnati and served as a community-engaged fellow at Xavier University as an undergraduate.

After completing her bachelor’s degree in history and classics, she knew she wanted to be a historian of slavery and African American history, and went on to earn a master’s degree and Ph.D. in public history. The Slavery, History, Memory, and Reconciliation Project, which was created in 2016 as a way to explore the Jesuits’ connections to slavery, was a natural fit, she said.

John Seitz, Ph.D., an associate professor of theology at Fordham, said what made Schmidt’s work stand out was the way she expanded the scope of sources to tell the story of enslaved people.

“The great thing about this work is not only that it exposes a world that we’ve had a very difficult time seeing through the historical record,” he said. “But it’s also such a meticulous and creative way of reading records [bills of sale, sacramental records, correspondence between Jesuits]that ostensibly don’t really have anything to do with what she’s interested in exploring, which is the lives of enslaved Catholics people.”

Seitz noted that Schmidt’s research is in keeping with a broader national reckoning.

“With the rest of the country, Jesuit institutions more broadly are having a movement when more and more people are agreeing that it’s time to come to terms more honestly and in a more transparent way with painful histories, including Jesuit ownership of slaves. Kelly’s work is remarkable in helping this effort,” he said.

“She provides a foundation for the kinds of work that needs to be done for reconciliation, healing, and reparation, which is a long road.”

In addition, he said that Schmidt exhibited a spirit of generosity in the paper by laying out a roadmap for future scholars who might want to replicate the research.

“She’s been through all these many, many layers of papers that are scattered and diffuse. She doesn’t just hide that; she talks about the process in this essay, and in talking about the process, she provides a great gift to her fellow scholars in the future who may want to do something similar, to recreate this hidden world,” he said.

For Schmidt, the process of researching the lives of those enslaved by Jesuits in the South and Midwest was both challenging and inspiring.

“I felt challenged in my faith, seeing exploitation that happened to people through the church, but then, as I learned more and more about the enslaved people I was studying, I was just continuously blown away by how resilient they were in their faith, and how even their enslavement to Catholic slaveholders didn’t stop them,” she said.

“They were so committed to their faith and using it to uplift themselves and push for the way things ought to be.”

The larger lesson, she said, is that all history is interconnected, and one can’t simply go to the archives and find one box labeled “slavery” and learn the full story of the past.

“We have to look far and wide to piece together the story, and we have to look past different dioceses and religious orders. Slavery wasn’t isolated to one institution, so you have to look through state records, local records,” she said.

“Doing it, we pieced together the lived experiences of enslaved people whose stories haven’t been told.”