skip to main content
Return to Fordham University
You are at:Home»Inside Fordham»Curran Center to Celebrate 10 Years of Dedication to American Catholic Studies

When new Fordham students visit the admissions office, one of the first things they’ll encounter in their passage through Duane Hall is the Francis and Ann Curran Center for American Catholic Studies. As a locus for teaching, scholarship, and public events, the center’s presence at the heart of the Rose Hill campus symbolizes Fordham’s unique commitment to its Catholic and Jesuit identity.

On Thursday, May 21, the Curran Center will celebrate the 10th anniversary of its naming with a gala honoring its benefactors, John P. Curran, PhD, PHA ’66, and Constance A. Curran. The couple will be awarded with Fordham’s prestigious Presidential Medal.

The Currans were inspired to endow the center in 2004 through their close friendship with Mark S. Massa, SJ, Fordham’s former Karl Rahner Chair in Theology. Father Massa first founded a center for Catholic study at Fordham, which opened one week after the tragedies of 9/11.

Father Massa, who is now professor of church history and dean of the School of Theology and Ministry at Boston College, had said at that time, “Now it’s more important than ever that we have a place where reasoned discourse about religion can take place.”

Through the generous support of the Currans and other donors, the center has continued to enable that discourse by offering an undergraduate concentration in American Catholic studies, faculty programs, and numerous lectures and conferences open to the public.

Reflecting on their decision to become benefactors, Constance Curran remarked, “John and I were both excited about the opportunity to help grow and expand the center’s programs.”

“For John, being able to name the center after his parents, Francis and Ann Curran, makes it a very special place.”

Student concentrators at the Curran Center engage in a rigorous program of inter-disciplinary courses and participate in community service. As well, they receive mentoring for post-graduation and scholarships toward tuition. 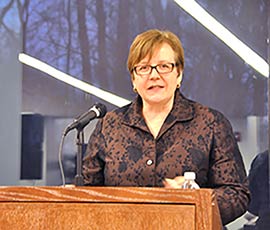 Father Massa envisioned a program that would help students carry their Catholic tradition into the world. “We were not concerned so much with getting people who were going to be ordained … although we certainly have that, but also we were interested in forming very talented undergraduates who were going to go on to be lawyers or doctors or professors, training them for positions of Catholic leadership,” he said.

Constance Curran said that meeting the graduating seniors has been one of the most meaningful experiences for her and John. “Year after year many of them tell us how being a concentrator at CACS has made them realize the importance of faith and social involvement in one’s life and work – it’s a partnership,” she said.

Christine Firer Hinze, PhD, professor of theology and the current director, sees the center as a “wonderful platform” for cultivating understanding and appreciation of “all things Catholic, whether it’s Catholic thought, Catholic practice, Catholic issues in society, Catholic art, Catholic literature—all the different facets of this tradition, which are so interesting, particularly as they live in the United States.”

The center’s public conferences and lectures reflect the diverse aspects of Catholicism, exploring topics such as Catholic education, the Catholic literary imagination, black Catholic culture, and Latino/a spirituality. For the past 10 years, the center has also hosted the Rita Cassella Jones Lecture on Women and Catholicism.

The center is now in the midst of a three-year series examining Catholic social teaching and the economy, which will culminate in a major conference in 2016, marking the 125th anniversary of the first issuing of a papal social encyclical in 1891. For this series, the center is also inaugurating its first Visiting Chair in American Catholic Studies.

Contemplating the Curran Center’s accomplishments and its continued importance, Hinze stated, “I think we’re in a moment historically where we badly need places that allow people to think and to dialog intelligently and compassionately about matters of faith as they intersect with culture, politics, the arts, society, and so forth.”

“At a Catholic university, and at a Jesuit university which has this long tradition of seeking the intersections of faith and the larger culture or faith and reason . . . , we’re really well situated to fill a need that’s out there for discourse that is informative but also very engaging and inter-disciplinary—something that helps people think and talk about these issues today.”