skip to main content
Return to Fordham University
You are at:Home»Living the Mission»CSTEP Scholarship Bridges the Final Financial Gap for Students
CSTEP students at a tutor-counselor training session in spring 2019. Photo courtesy of Renaldo Alba
As the fall semester ended, a new scholarships gift to the University’s Collegiate Science and Technology Entry Program (CSTEP) was making a difference for Fordham students who come from underrepresented groups or economically disadvantaged backgrounds.

The $2.5 million gift by Fordham alumna and former trustee Christina Seix Dow, TMC ’72, and her husband, Robert Dow, adds to the $2 million they gave nine years ago to establish their scholarship fund for CSTEP students. The new gift, announced in January 2021, comes in the midst of a Fordham fundraising campaign, Cura Personalis | For Every Fordham Student, that comprises four pillars including access and affordability. The gift is now producing an uptick in funding for students and, within a few years, could provide aid to nearly half of the students in the program, said its director, Michael A. Molina.

The fund has been a “godsend” for students, said Michael A. Molina, director of the CSTEP and STEP programs at Fordham. The additional gift is “really going to enable us to help a lot more students meet their financial need.”

In establishing the scholarship fund, the Dows were supporting students who remind them of themselves.

“My wife and I came from very little. For a long time, we’ve felt we’ve been fortunate, and it’s time to pay it forward or pay it back for students who may come from even more difficult situations than we had,” said Robert Dow, a former managing partner at Lord Abbett, an investment management company.

Support for the Underrepresented

CSTEP is a statewide program designed to support those who tend to be underrepresented in professions related to science, technology, engineering, and mathematics (STEM) as well as the the licensed professions, including health care. 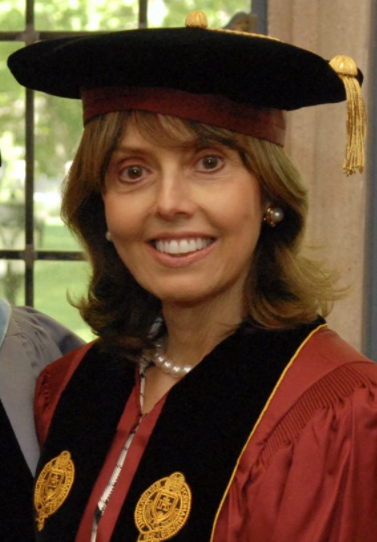 At Fordham, the students it serves tend to be Black, Latinx, first-generation, economically disadvantaged, and members of immigrant families living in the Bronx or its environs, Molina said. It has provided them with academic support, counseling, internships, scholarships, and research opportunities since 1987.

The original $2 million scholarship gift has helped 40 or 50 CSTEP students per year, providing sums ranging from a few hundred to a few thousand dollars that can make all the difference for families that have pulled together every last resource—grants, loans, scholarships—to meet their students’ costs, but who still need financial help, Molina said.

With the new $2.5 million gift, the Dows’ scholarship fund could help nearly half of the approximately 270 students in the CSTEP program within a few years, Molina said.

The Christina Seix Dow College Science and Technology Entry Program Endowed Scholarship Fund is a need-based fund, with a GPA requirement, established to help CSTEP students stay at Fordham and graduate with less debt. “We hope that whatever they do, [the recipients are]they’re successful in life,” Robert Dow said. “And if they become successful financially, hopefully they’ll think about what gave them a start and pay it forward as well.”

Seix Dow has much in common with the CSTEP students she supports. She’s Puerto Rican, from the Bronx, and graduated with a bachelor’s degree in mathematics from Fordham. She was raised in a small apartment with limited resources, but, she has said, was surrounded by a loving family that developed her core values.

She became a multimillionaire bond manager, eventually forming her own investment management firm. She later founded the Christina Seix Academy, an independent school in New Jersey for underserved children. Seix Dow was among the first class of pioneering women in philanthropy at the inaugural Fordham Women’s Summit in 2017.

The scholarships are a significant gift for the CSTEP students, many of whom are thousands of dollars in debt, said Renaldo D. Alba, associate director of the CSTEP and STEP programs. They not only help graduates leave Fordham in good financial health, but also prepare them to give back to their own communities.

“Our students often require graduate or professional school training, and at that level, there’s little to no financial aid. But if they’re in good [financial]health after graduation, they can take on additional loans at the next level. And if they do well and manage their loan debt as graduate students, they’re more likely to consider working in fields that may not be as lucrative in compensation, in communities that often don’t have the resources or money, because they don’t have to pay off these loans,” Alba said.

“A scholarship of this magnitude is so significant for students like these that are naturally inclined to stay in their community.”

Among the Seix Dow scholarship recipients is Leslie Abreu, a Dominican student from the Bronx who realized that Fordham was her “dream school” while attending the adjacent Fordham High School for the Arts, where she became class valedictorian.

“At one point, I was considering not going to my dream school because of finances,” said Abreu, who is enrolled in a five-year program to earn both a bachelor’s degree from Fordham College at Rose Hill and a Master of Science in Teaching from the Graduate School of Education. “Receiving help like that gives you reassurance that you are on the right path.”

Life hasn’t been easy for Abreu. Her father passed away in her senior year of high school, but he had encouraged his daughter to apply to Fordham. In her time at the University, she has advised two seventh graders in the Mentoring Latinas program, served as a peer counselor for pre-college students, and tutored middle and high school students in math as a tutor in CSTEP’s sibling STEP program for junior high and high school students. Someday, Abreu plans on following Seix Dow’s and her husband’s footsteps and paying it forward.

“[Seix Dow’s story] reassured me that that path is possible,” Abreu said. “And the fact that she has been able to help people like us shows me that I can also do that in the future.”

If you have a question about giving to Fordham, call 212-636-6550 or send an email to development@fordham.edu.