Fordham hosted a pair of spring concerts on April 9 and 10 that focused on the art and architecture of the Church of St. Paul the Apostle and the Fordham University Church. 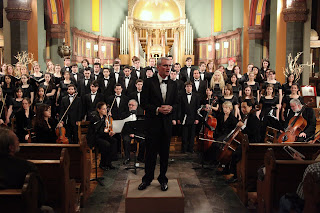 Gregory Waldrop, S.J., assistant professor of art history, discussed the mural The Crucifixion on April 9 at the Church of St. Paul the Apostle. The mural, which was painted by William Laurel Harris from 1906 to 1908, hangs above the door of the church.

The story depicted in the artwork is very familiar and has a “classic cast,” as Father Waldrop called it, featuring Jesus surrounded by golden ether, the Virgin Mary, Mary Magdalene and St. John.

The crucifix in the mural is in axis with the cross over the altar at the front of the church. 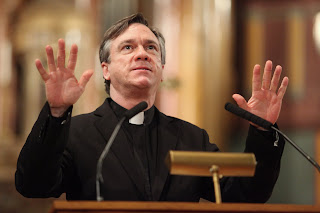 “The conjunction of images of Christ’s saving body defines a space, and gathers up in that space all those present in the church—the flock, who gather to praise God on the cross, who gather to hear the word proclaimed from the pulpit, who gather to receive Eucharist at the altar,” Father Waldrop said.

Father Waldrop discussed details that only can be seen by looking closely at the mural from the balcony. He described the gold shimmer that coats the pink sky and purple city in the artwork. He said that the city scene and sunset are based on the actual Jerusalem, at least in mood and lighting, and show a definite moment in time.

The city painted in the mural above the entrance of church is contrasted with New York, the “very real, very alive, very specific city where hope is made concrete in our living out the love that God has shown us,” he said.

Monsignor Joseph G. Quinn, vice president for University mission and ministry, spoke on April 10 about the Stations of the Cross at the Fordham University Church.