skip to main content
Return to Fordham University
You are at:Home»Living the Mission»Church will Embrace Systemic Change to Deal with Clergy Abuse, Says Vatican Rep
Photos by Leo Sorel
The Catholic Church in the United States is mired in “spiritual desolation,” a leading Jesuit speaker admitted in a speech to the Fordham community on March 26. But, he said, there’s hope that real, long-lasting change is afoot.

“For the first time in the church, we talk about systematic elements [of the crisis],” said Hans Zollner, S.J. “And who is it that put it on the agenda? The pope himself.”

Father Zollner, the president of the Centre for Child Protection at the Pontifical Gregorian University in Rome, delivered the Russo Family Lecture at Reckoning and Reform, a symposium organized at the Lincoln Center campus by the Center on Religion and Culture. As the head of this center in Rome, he’s responsible for the church’s efforts to provide education and training for people working to safeguard minors. Pope Francis also named Zollner to the Pontifical Commission for the Protection of Minors, and he is a consultor to the Vatican’s Congregation for Clergy.

He noted that although the sexual abuse crisis has been ongoing in the United States since the mid-1980s, what is different now is that discussions have finally moved beyond simply holding individual priests responsible for abusing children; there have been more efforts focused on examining the system as a whole. He credited the August release of the Pennsylvania Grand Jury report, as well as the #MeToo movement, with jolting church leadership into action.

There is a recognition that the structure of the church hierarchy, whereby each of the church’s roughly 5,000 bishops reports directly to the pope, is not working, he said. It’s one of the reasons why reforms such as the “Five Principles” that the U.S. Conference of Catholic Bishops adopted in 1992, failed, he said, and it’s the reason why church leaders are discussing changes such as giving archbishops more authority over other bishops.

In the near future, he said, task forces of three or four people will be deployed to each continent to help bishops’ conferences and religious orders develop guidelines for responding to the problem, and “the church in 20 years will look very different than what we know now.”

A Problem With Global Reach

Another big part of the problem is that up until very recently, Father Zollner acknowledged, the phenomenon of men using their power to prey on others has been very much under the radar globally. He noted that even in his native Germany, the abuse scandal that erupted in 2002 in the United States did not stir his fellow countrymen to examine the issue there. It took another eight years for Germans to undertake the painful process of examining abuse allegations that had been ignored.

Father Zollner attended the four-day summit of bishops that Pope Francis convened last month to address the issue, and he noted that many bishops in attendance needed to be convinced that sexual abuse is even a problem. In fact, he estimated that of the 60 countries he’s traveled to over the last few years, leaders from 75 percent of them said sexual abuse was not their highest priority.

“It’s not that there are not cases of abuse, and it’s not that they’re not reported. But it is not a number-one issue, neither in society nor in church,” he said, acknowledging that this might be surprising to an American crowd. “This is something that is very difficult to convey to an audience like yours, where you’ve been dealing with this topic since 1985 and you’re fed up. And you think, when is it over?” he said.

“What I say is, this will not be over in our lifetime, at least in countries where they have not yet started to talk about it.” But Father Zollner said the recent bishops’ summit saw movement in the right direction.

He said that although there was resistance at the meeting, conversations he had there convinced him that Pope Francis had persuaded more bishops around the world to take the problem more seriously.

And in the United States, he said, the church has made great strides in recent years in protecting children from abuse, noting that before he could celebrate Mass in the U.S. during his current visit, he had to produce a letter from his superiors verifying that there were no allegations of abuse against him.

The next step, Father Zollner said, is for church leaders around the world to show they’re not taking action only because they’re being forced to by activists, the press, or the authorities.

“What is lacking is the communication of the heart. Because once you believe that a person means what he says, and the heart is palpable, then you trust that we are going forward,” he said.

Part of that effort will come through what the pope has called synodality, or a coming together of the lay people and clergy, he said. The task forces for bishops and religious orders are a start.

“We need outside help. We need expert advice. We need people who can intervene and counsel what the next step is. And that is very much contrary to our normal thinking. Church thinking is, ‘Outside people don’t understand us. Therefore, we need to find our resources within,’” he said.

“This is very harmful over time, because then it is inbreeding. And you know what happens with inbreeding? At a certain point, diseases develop.” 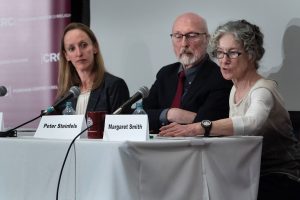 Zollner’s talk was preceded by a panel discussion featuring Karen Terry, Ph.D., a professor of criminal justice at John Jay College, and Margaret Smith, Ph.D., a quantitative criminologist at John Jay College’s Institute for Criminal Justice Ethics. They explained the findings and recommendations of their own investigation of the sexual abuse crisis, which they detailed in the report Stained Glass: The Nature and Scope of Child Sexual Abuse in the Catholic Church.

Their key point was that the findings of their research, which they wrote at the behest of the Vatican in 2002 and which covered every allegation of abuse from 1950 to 2002, have mirrored the data that the independent non-profit Center for Applied Research in the Apostolate (CARA), reported in 2017.

This was notable, Terry said, because when she and Smith released their results in 2008, some were skeptical of their motives because they were hired by the Catholic Church and they were working with anonymous data. But CARA, which has analyzed 8,645 new complaints of abuse originating from the same period, came to the same conclusions. Similar findings have also been noted in studies conducted recently in Australia, Poland, and Germany.

Some of the most significant findings are that the highest percentage of sexual abuse took place between 1974 and 1982, and that just 3.5 percent of priests implicated in the 10,667 instances of abuse were found to have more than 10 victims, indicating that the majority of the abuse was committed by a small group.

Terry said that their findings are also consistent with the widespread abuse that has been found in other institutions where adults have the ability to interact with and mentor adolescents. The Boy Scouts and U.S. Gymnastics, for instance have had recent revelations of sexual abuse, as has the Jehovah’s Witness.

One aspect that makes the Catholic Church unique is it has more historical records than any other organization to study. Smith reiterated that homosexuality is not part of the issue, noting that when girls began serving as altar servers in the 1980s, they were victimized in equal numbers by male priests as boys.

“Everything that we know as social scientists indicates that human beings abuse others, but the nature of the sexual orientation is not a factor,” Smith said.

“Humans are capable of abusing others, and they do so regularly.”

She also rebutted the notion that the vows of celibacy that Catholic priests take might be a factor, noting that surveys show that nearly a third of all U.S. citizens are celibate.

“I think that these terms become labels, and they become easier answers than more profound questions on how it is that we allow those with power and prestige to abuse those with less,” she said.