skip to main content
Return to Fordham University
You are at:Home»Living the Mission»Church Teachings Crucial to a Just Economy, Say Panelists
Photo by Leo Sorel
Contrary to Michael Douglas’ exhortation in the 1987 movie Wall Street, greed is not good. In fact, it’s tearing our country apart and endangering the health of the planet, Cardinal Joseph Tobin, archbishop of Newark, said on Wednesday at the Lincoln Center campus.

In his presentation to a standing room only crowd in the McNally Amphitheatre, A Moral Economy: Faith and the Free Market in an Age of Inequality, sponsored by the Center on Religion and Culture (CRC), Cardinal Tobin offered a vociferous defense of the Catholic Church’s stance on the modern global economy. The current economic order has produced unprecedented levels of income inequality, he said, and echoing Pope Francis, he noted that “people who feel abandoned will unravel solidarity” among the human race.

A Long Tradition of Weighing in

While Pope Francis has raised hackles among free market apostles with his criticisms of capitalism, Cardinal Tobin noted that Pope Pius XI weighed in on the subject as far back as 1931, and Francis’ predecessor, Pope Benedict XVI was even more forceful. Francis, while more tolerant of debate within the church than his predecessor, is equally adamant that the church has a role to play in world-wide affairs. 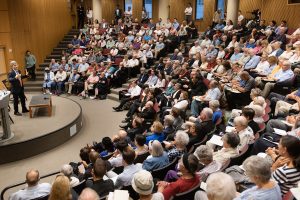 “More than his predecessors, Francis encourages reflection, even debate among his doctrine. He does not invoke infallibility to support his conclusions regarding social phenomenon, but he does insist that the Christian life has a soulful dimension, and rejects any attempt to reduce the response of faith to an individualistic morality,” he said.

“As a good pastor, he claims the responsibility of speaking on social morality for the good of all.”

The starting point for change, Tobin said, is at the “existential peripheries of life.”

“What does inequality really mean? A clear and humble view of it will tell us it’s people we don’t see at all, and people whom we don’t see for whom they are.”

The problem, he said, is the CEOs who embrace the idea that the day that a corporation thinks more about the good of society than it does its bottom line is the day that corporation goes out of business.

“Francis says ‘No, a just economy must be concerned with the common good,’” Cardinal Tobin said.

Both Cardinal Tobin and CRC director David Gibson acknowledged at the start of the event that it was awkward to focus on another subject in light of the sex abuse crisis that again engulfed the church this summer. The sex abuse crisis, he said, is “the bitter fruit of a toxic culture,” and Catholics have a right to be angry about it. But he said it shouldn’t result in shutting down discussions of Catholic social justice teaching.

History of the Anglo-Saxon Approach to Wealth

Jeffrey Sachs, Ph.D., director of Columbia University’s Center for Sustainable Development, delivered a response to the Cardinal’s lecture, and joined him afterword in a discussion moderated by Washington Post columnist Christine Emba.

Sachs said that although few religious traditions had directed as much intellectual firepower toward issues such as climate change and economics as the Catholic Church, its message is greeted with great skepticism in the United States. That’s because we subscribe to an Anglo-Saxon perspective on wealth that suggests that tapping into an individual’s inherent greed and is a good thing. We have Bernard Mandeville’s 1714 poem “The Fable of the Bees,” to thank in part, he said. 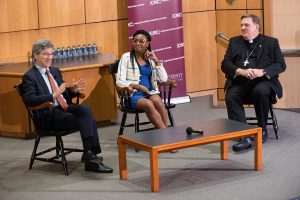 “He wrote a poem that said the bees have created this great hive by all of their vices being allowed to be free. This was the paradox: That by unleashing greed, which the sages had said forever should be keep under control, you would create dynamism and greatness. You would create, as Mandeville said, the “envy of all the other hives.”

Sachs said Adam Smith then took the idea, and in his 1776 treatise, The Wealth of Nations, dubbed it “the invisible hand” of the market. By pursuing their own goals, Smith posited, individuals created the collective wealth of the nation. Over time, Sachs said, this has morphed into a twisted, amoral celebration of greed, epitomized by the writings of Ayn Rand.

“So about 2,000 years of good thought that greed really isn’t good for the soul, and isn’t necessarily good for the community or what Aristotle called your eudaemonia, basically went out the window,” he said.

“In my field, we created the weirdest anthropology that said people are selfish and greedy,” said Sachs, who is a noted economist. “But that’s OK, because the invisible hand will create a prosperous society. We teach that in bad economics courses. I know, I took one.”

In his encyclical Laudato Si, Sachs said, Pope Francis connected unrestrained greed to what scientists call the Anthropocene, a period during which human activity has been the dominant influence on climate and the environment, with dire consequences.

“What Pope Francis is telling us is, we have to get the greed under control if we’re going to survive. It is blinding us to the dangers. Why is the U.S. pulling out of the Paris climate agreement? The simple line is, the president is a nincompoop, an ignorant, nasty person,” he said.

“But it’s the greed that’s doing it. It is the inability of a CEO of an oil company to say, I shouldn’t destroy the planet; I’ve got a bottom line to meet,” said Sachs. What Pope Francis is saying is, ‘No, that’s not right. The property rights, the profit, the greed motive cannot be what determines our fate; we will destroy ourselves that way.”