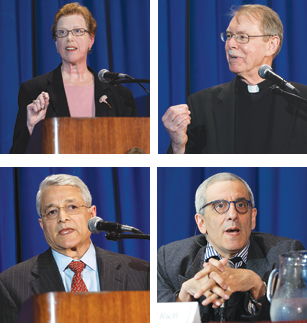 Faith can greatly help both those suffering from humanitarian disasters and humanitarian aid workers who take inspiration from their faith.

But at what point does that faith take the form of proselytizing?

Does Faith-based Humanitarian Aid Deliver Relief or Redemption?, a panel discussion hosted by Fordham’s Center on Religion and Culture and the Institute of International Humanitarian Affairs on May 15, brought into focus the complexities that have been inherent in that question for centuries.

Susan Martin, Ph.D., executive director of the Institute for the Study of International Migration at Georgetown University, noted that the question of whether aid workers should impose their beliefs on a local population is not limited to faith-based groups.

“I’m a proponent of women being strongly involved in [having decisionmaking roles]on aid.” In certain cultural contexts, she said, that position on women could be considered sensitive.

“What we may consider a set of universal human rights is not necessarily going to be taken by the local population in that same way. All humanitarian aid workers very often face this issue: to what extent do your values determine the way in which you provide relief and assistance?”

Masood Hyder, consultant at the United Nations World Food Program, Development Program and Office of Humanitarian Affairs, likewise noted an overlapping of the secular with the religious. On his first humanitarian assignment supervising the delivery of grain to Ethiopia in 1984, he found himself in charge of distributing a ship’s worth of corn to thousands of hungry people, through a potentially disorganized process.

“A thought struck me quite forcibly, that I was engaged in a job that was not like an ordinary job. If I did it well, I could be really helpful to many thousands of people, but if I did it badly, there might be consequences not only here, but also up there,” he said, gesturing upward.

“At the pearly gates, I might be told, ‘We gave you an opportunity to help your fellow creatures down there in Djibouti, and you blew it.’ So there is something spiritual about humanitarianism that affects not only those who come with their faith, but also those doing [secular]work.”

David Rieff, author of A Bed for the Night: Humanitarianism in Crisis (Simon & Schuster, 2003) said that humanitarian aide has historically been driven by religion and colonialism, and it has only been in the last century that secular organizations, such as Save The Children, Oxfam, and Doctors Without Borders, were founded.

Kenneth Gavin, S.J., assistant international director of the Jesuit Refugee Service (JRS), said the work of Mourad Abou Seif, S.J., in Aleppo, Syria illustrates how JRS was able to offer humanitarian aid to people of all faiths. Nine months ago, he said, a young brother of JRS’ night watchman was killed in crossfire.

In spite of the physical danger to himself, Father Mourad put the boy’s body in his car at dusk and drove across town to the Muslim cemetery, where the boy’s family buried him in their faith’s tradition.

“JRS is truly inspired by faith, but a faith that is inclusive rather than exclusive,” he said. “We believe in the intrinsic value of every human being, and because of that, we do not proselytize. Rather, we strongly support the right of all people to religious freedom.

“With other faiths and other like-minded partners, we share common human values, such as justice, dialogue, peace, and reconciliation. [They are] the sustaining force for a viable, workable community.”