skip to main content
Return to Fordham University
You are at:Home»Living the Mission»Celebration of Cardinal Dulles’ Life Comes to Close

On the centenary of his birth this past September, Fordham celebrated the life and legacy of Avery Cardinal Dulles, S.J., with a day-long conference that highlighted the cardinal’s enormous influence on the church.

On April 8, colleagues, friends, and associates who knew him best closed out the University’s yearlong celebration of the cardinal with an evening of discussion, prayer, and fellowship.

“The Apologetics of Personal Testimony: A Celebration of the Life and Faith of Avery Cardinal Dulles, S.J.,” featured a panel discussion, a Mass and a dinner reception on the Rose Hill campus, Cardinal Dulles’ home for 20 years. 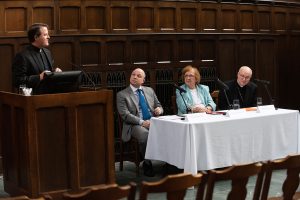 The day began at Tognino Hall, where Michael C. McCarthy, S.J., vice president for Mission Integration and Planning at Fordham, moderated a panel discussion featuring Michael Canaris, Ph.D., GSAS ’13, assistant professor at the Institute of Pastoral Studies at Loyola University Chicago, Anne-Marie Kirmse, O.P., former research associate for the McGinley Chair in Religion and Society at Fordham, and the Most Reverend James Massa, auxiliary bishop of the Diocese of Brooklyn.

Sister Kirmse focused on Cardinal Dulles’ journey of faith, from his early years in a deeply religious Presbyterian household to his casting off belief in God in high school and first two college years, to his conversion experience and his search for a church in which to practice his faith.

Cardinal Dulles was educated at Choate Rosemary Hall and Harvard University, and his family included a father who became secretary of state (Washington Dulles International Airport is named for him) and an uncle who became head of the CIA. He converted to Catholicism and went on to become the first American who was not a bishop to be named a cardinal. That same faith, she said, sustained him in the time of declining health in the years before his death.

Canaris as well picked up on that suffering—which he saw first-hand as Cardinal Dulles’ last doctoral student—speaking about “the crucible of torture in his last months.” In the end, Canaris, who is editing a volume based on papers on Cardinal Dulles delivered during events at Fordham this past year,  said Cardinal Dulles was like the tested man in the Letter of James.

“Blessed is a man who perseveres under trial; for once he has been approved, he will receive the crown of life which the Lord has promised to those who love Him,” he said. 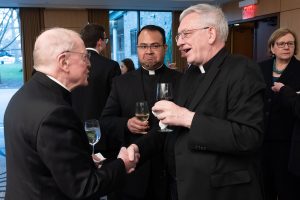 The day concluded with a reception and dinner where attendees shared their favorite memories of Cardinal Dulles.

Bishop Massa recounted Cardinal Dulles’ long engagement with ecumenical dialogue, as well as the cardinal’s growing disappointment with how that dialogue was conducted, and where it was headed. While he stressed that Cardinal Dulles never reversed himself on the subject and “personally stood by all the ecumenical statements he had ever signed,” he said Cardinal Dulles believed “the ground had shifted” since early years after the Second Vatican Council and said a new term for this new landscape was needed.

“Avery gave it a name: ‘Mutual enrichment by mean of personal testimony.’ That focus on the witness of one’s Christian life became a motif of Cardinal Dulles’ later years, and was powerfully testified to by his final illness,” he said.

A Mass of remembrance concelebrated by the Jesuit community of Fordham followed at the University Church. Bishop Massa served as principal celebrant, and Patrick J Ryan, S.J., the Lawrence J. McGinley Professor of Religion and Society, delivered the homily.

At a dinner reception at Bepler Commons, Joseph M. McShane, S.J., president of Fordham, recalled Cardinal Dulles’ humble nature, noting that after he was elevated to Cardinal in 2001, he pointedly declined the honorific “Your Eminence” in favor of the traditional “Father.”

Cardinal Dulles was also close friends with Edward Cardinal Egan, Archbishop of New York, he said, and when his health started to fail him in his later years, Egan visited him often and offered him a final resting place at St. Patrick’s Cathedral.

“Dulles flatly told him ‘no.’ After some back and forth, he explained his reason: he wanted to be buried next to his Jesuit brothers,” Father McShane said.

“Avery Dulles was buried next to man a who taught high school math—a good guy.”