skip to main content
Return to Fordham University
You are at:Home»Living the Mission»Cardinal Dulles Remembered by Elizabeth Johnson, C.S.J. 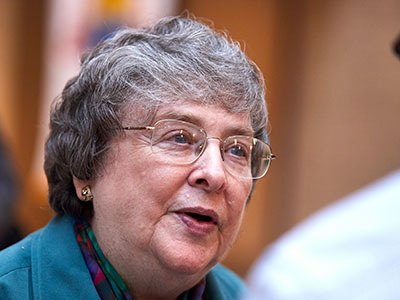 Sister Elizabeth Johnson, distinguished professor of theology emerita, at the Dulles at 100 event on Sept. 24. Photo by Argenis Apolinario

The words of renowned theologian Avery Cardinal Dulles, S.J., continue to inspire a generation of religion scholars. And it was conflict and dialogue among theologians that resulted in some of his important work.

Elizabeth Johnson, C.S.J., a long-time colleague to Dulles, the first American Jesuit ever to be named a cardinal, delivered a keynote on the “fluency of interpretation” of his thought at Dulles at 100, a recent celebration of his work and legacy at Fordham.

She began with Models of the Church, a book Cardinal Dulles wrote in 1974, after the Second Vatican Council, when conflict began to swirl among theologians as they debated different understandings of the church.

“Avery took this as a sign of vitality,” said Johnson, distinguished professor of theology emerita at Fordham. “His systematic mind created a way forward.”

In the book, Cardinal Dulles studied the writings of contemporary Protestant and Catholic ecclesiologists and laid out six major approaches, or “models,” through which the church’s can be understood: as institution, mystical communion, sacrament, herald, servant, and, in a recent addition to the book, as community of disciples.

“In this book, he showed how each these models had its own strengths, and how each also had its weaknesses. No one is sufficient to do justice to the full living reality of the church. So better to set up the dialogue among them and develop a theology that draws from the major affirmations of each,” she said.

It was not an ‘anything goes’ kind of approach,” Johnson said, but “it helped to wean ecclesiology from a one-horse sleigh way of traveling. The fluency of his way of thinking made theology even beyond ecclesiology more comfortable with pluralism, more at peace with diversity.

“To quote Avery, ‘We are as different from our medieval ancestors of the faith as the computer is different from the abacus.’ And that was written in the ’70s! ‘Thus, the religious language of one period needs to be revised for another,” Sister Johnson said.

Cardinal Dulles applied this approach not only to set topics in theology like ecclesiology, but to the teaching of the magisterium, she said, calling attention to his essay, “The Hermeneutics of Dogmatic Statements.”

The 15-page essay contained Cardinal Dulles’ six principles for interpreting doctrinal statements and a call for theologians to “refocus the message so that it speaks directly to the deepest concerns of people today.”

Johnson quoted the essay, calling attention to a great image he paints: “‘We cannot nourish people today with the stale fragments of a meal prepared for believers of the 13th, or 14th, or 16th century. We must articulate new theology with new doctrinal insights that will orient people to Christ in our day and relay the Christian message to ages yet to come.’”

She said she first read and discussed this essay under Avery’s tutelage in a graduate seminar, noting that it was something that influenced her own work and that she would go on to teach and discuss with new generations of graduate students.

“The fluency of his approach to interpreting theological differences and limitations of church teaching, an approach he later characterized in a different essay … as one of creative fidelity, opens a way to think deeply and critically about faith, and thus enables younger people to carry out the theological vocation with integrity,” she said. “Avery himself used this fluency broadly as some of his books made clear. He didn’t always carry it out. Avery was a complicated person. But this fluency, I think, is a rich part of his legacy.”

During the question and answer portion, Johnson was asked how “the Avery Dulles of later years” would look back on that essay. She said it was something the pair had discussed in his later years at Fordham.

“He never withdrew from these principles. They’re too deeply rooted in his own assessment of things. The practical way it would work out, though, is where we would differ; there would be differences.”. So if were interpreting a controversial issue, she said, he would feel he was still doing so using the principles laid out in the essay, “but with different assumptions about some people’s experiences that would lead him to a different conclusion. But, no, he never retracted. It was an interesting conversation. It was actually a painful conversation because I was writing things with which he would disagree, and so I’d say, ‘But you taught me how to do this.’ It does not change what he wrote and he stood by it.”