skip to main content
Return to Fordham University
You are at:Home»Colleges and Schools»Fordham College at Rose Hill»Building a Sisterhood and Roadmap to Success for Young Latinas

One afternoon in September, Sandra Turner, Ph.D., director of the Fordham Institute for Women and Girls, joined a group of Fordham mentors of the Club Amigas/Mentoring Latinas program to pick up mentees from Belmont Preparatory High School, a nearby school situated within the Theodore Roosevelt Educational Campus in the Bronx.

As the group was making its way back to the Rose Hill campus across the street for a mentoring session, Turner noticed that one of the girls who was walking alongside her had a temporary tattoo with the word “Pink” on her cheek.

“I said, “Hey, what’s that about?” Turner recalled. “She was very shy and hesitant at first and then she told me that it was in memory of her grandmother, who had recently died and loved the color pink.”

The young Latina would go on to share some of her personal worries—from the absence of her father who was incarcerated to a younger sister living in another country who she longed to see.

“She just kept talking,” said Turner. “All of these things had been bottled up inside of her. It made be realize how much young people need someone to show interest in their lives, whether it’s someone my age or a mentor who is closer in age to them.”

Founded in 2003 by Ellen S. Silber, Ph.D., Mentoring Latinas provides support and mentorship to Latinas in middle school and high school at the Rose Hill campus in the Bronx, the New York City borough with the largest Hispanic majority. 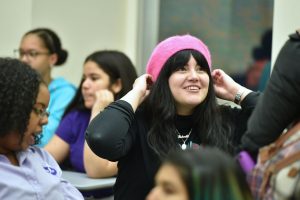 Mentoring Latinas’ Roberta Munoz talks with mentees during a holiday party at the Rose Hill campus. Photo by Dana Maxson.

The program was created to address the educational challenges that young Latinas face. Graduation rates for Latinas have decreased over the last decade, and Latinas hold 7.4 percent of the degrees earned by women—even though they constituted 16 percent of the female population in 2012, according to the Center for American Progress.

Over the years, Mentoring Latinas has attracted generous support from corporate and private foundations and the state and federal government, including the Colgate-Palmolive Inner-City Fund, AT&T, Walmart Foundation, and the U.S. Department of Education.

With the help of AT&T, which has contributed over $350,000 to-date to the program, Mentoring Latinas is positioning Bronx adolescents for success inside and outside of the classroom. To boost educational achievement and social growth among high school Latinas, the program pairs each student from local schools in the community with a Latina college student from Fordham University. The goal is to build relationships, promote a healthy bicultural identity in mentees, and prepare them for high school and college, said Miriam Quilan, ACSW, who took over as director after Silber retired in 2015.

Most recently, the Mentoring Latinas program was chosen to participate in a state-of-the-art survey with AT&T, Travelers and several leading practitioner organizations to create the College and Career Readiness Genome, an evidence base of research literature to identify best practices in programming that can increase high school graduation rates, college and career access and readiness, along with college persistence and completion.

According to Quilan, Latina adolescents face many barriers to education. She noted that many of the mentees are daughters of non-English-speaking immigrants who often struggle to navigate the American educational system. It’s something that rings true for Mexican-born mentor Roberta Munoz, a Fordham College at Lincoln Center (FCLC) junior.

“I have an older sister who graduated with a master’s in engineering from an Ivy League school,” said Munoz. “No one helped her with the college application process but she helped me so much. She inspired me to do the same for another Latina.”

For Graduate School of Social Service student Marisol Chaparro, Mentoring Latinas allows her to share the mistakes she made as a teenager and the lessons she learned along the way.

“When I was young, I didn’t have someone to mentor me,” said Chaparro, who dropped out of high school but went back to school and received her bachelor’s in sociology before enrolling in Fordham’s graduate program for social work. “I took different routes that weren’t the best and eventually had to find my own path.”

Stay up-to-date on campus happenings,
Sign up for our e-weekly Fordham News.

Haydee Davila, FCLC ’14, a Mentoring Latinas alumna, said her involvement in the program inspired her career in youth services after she graduated from Fordham. She works as an education coordinator for a nonprofit community-based organization in Brooklyn, where she lives.

“The more I worked with Hispanic families in the field of education, the more I realized my community needed support. So I looked into more ways of getting involved, ” said Davila.

Mentors said that, like their mentees, they’re gaining knowledge and developing a sense of belonging through the program, which has served more than 400 adolescent Latinas since it was established.

“It may sound cliché, but it’s really a sisterhood,” said Fordham College at Rose Hill senior Kathryn Madigan, a Guatemalan who hails from Wisconsin, where she said her interactions with Latinas were limited. “We’re empowering students in a way I wish I [had been]. ‘If they can do it, I can too’— that’s the kind of community we’re building and the results are amazing.” 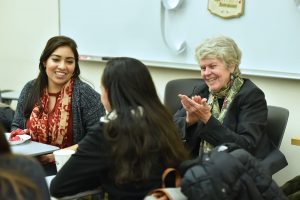 Madigan said that two years ago, one of her mentees was struggling in global history and was nervous about an upcoming test, but her anxieties subsided once Madigan gave her a pep talk.

“I think just having me there helped,” said Madigan. “I told her to get a good night’s sleep and eat breakfast the next morning. I also told her about my love of history. I said, ‘sometimes when you’re studying history, you have to think of it as stories and not just facts.’ She embraced this mindset and she actually did really well on her test.”

One of the things that makes the program a success is that the mentors recognize the importance of leading by example.

“I always emphasize that education is a priority in my own life, and I encourage them to do the same,” said FCLC senior Magdalena Valenti, who mentors middle school students in the program. “I think when they see a person who is older than them succeeding at a school that is close by and reputable, it breaks the ice. They say, ‘well if my mentors come to Fordham, there is obviously a place for me there.’”

At a holiday party in December, the mentees seemed right at home. In one room, middle school mentees and their mentors each spoke about special talents they possess.

One mentee, described by mentors as shy and quiet, unveiled a plaque she had just received for being the best debater on the school team. Another girl read a statement about how she used to be bullied in school but has learned to stand up for herself with help from her mentor.

Two rooms away, a group of high school mentees and their mentors sat in a circle and took turns sharing what they were thankful for as they prepared for a new year.

When it was one mentee’s turn to express gratitude, she looked around the room and paused.

“I’m thankful for everybody in this room at this time,” she said. “You guys have all taught me something in your own way, whether you know it or not.”

(Mary Awad contributed to this article.)