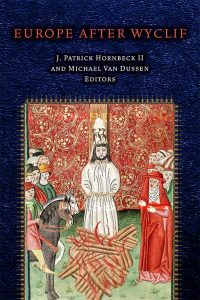 Before Martin Luther, there was John Wyclif.

The 14th-century English theologian and professor was a major inspiration for Christians who, in the years leading up to the Protestant Reformation, began to question the need for a pope and the doctrine of transubstantiation.

He was not alone in his questioning; Christians in England who longed for a simpler, more biblical religion embraced him. They were all subsequently branded Lollards, a catchphrase for heretics.

Wyclif’s influence extended beyond England into Bohemia (currently the Czech Republic), thanks to cultural and trade links that were established by the king of England’s marriage to a Bohemian princess in 1382. Until recently, this cross-continental exchange of ideas has warranted little attention from historians and scholars of religion.

Europe After Wyclif a new book published by Fordham University Press, seeks to remedy this, via a compilation of new research presented at a three-day conference that Fordham’s Center for Medieval Studies hosted in June 2014.

J. Patrick Hornbeck II, D.Phil., chair of the Department of Theology, one of the book’s editors, said the idea behind the conference and resulting book was to make Fordham a meeting place where English-speaking scholars and Eastern European scholars could interact in ways they never had before.

He cited Jan Hus, a reformer from Bohemia who was influenced by Wyclif and who was burned at the stake in 1415 for his heresies. Hus is as well-known a figure to Czech citizens as George Washington, Thomas Jefferson, and Abraham Lincoln are to Americans. Only recently has the relationships among Wyclif, Hus, and their respective reform movements been studied in great detail, though.

“Often, both groups were making assumptions about the other that were based on out-of-date material. We wanted to bring together the cream of the crop of scholars in both geographical areas, and to do so across the academic disciplines as well.”

Hornbeck pointed to a chapter by Pavel Soukup, Ph.D., associate director of the Center for Medieval Studies at the Czech Academy of Sciences, as an example of how regional controversies are inseparable from broader cultural and religious developments.

Soukup examined the ways in which bishops reported incidents of heresy, and the Vatican recorded them, over time, paying special attention to the descriptors that church officials used. For a long time, English heretics were referred to as Wycliffites, due to their association with Wyclif. When similar heretics showed up in Bohemia, they too were dubbed Wycliffites—but it was erroneous to group them together in spite of similarities.

“So Soukup plots carefully over time how church authorities eventually came to separate ‘Wycliffies’ from ‘Hussites’ or even ‘Bohemians’, as they later began to call them, and he argues that these simple changes in name can tell us much about how church leaders saw the relationships among different groups of reformers,” he said.

The conference, which was held in association with the Lollard Society and McGill University, was made possible by a $25,000 grant from The Social Sciences and Humanities Research Council of Canada.