How, in a world that is defined by mass extinctions, mass killings, and mass migrations, are we to be a people of peace and nonviolence?

That was the question posed on Oct. 23 at “Keep Fracturing the Good Order: Daniel Berrigan, the Long Haul, and the Big Heart,” a lecture that celebrated the life of Daniel Berrigan, S.J., and advised on how to survive peacefully in today’s world.

Speaker Anna J. Brown, Ph.D., of St. Peter’s University in Jersey City, New Jersey, was a friend and colleague of Father Berrigan. She met him through the Kairos Community, a peace community Father Berrigan started in the late 1970s. She described him as a “human being who was deep in prayer, faith, and soul.”

“Dan spent his life fiercely committed to nonviolence, being genuinely loving to all and centered in faith and community,” said Brown. “He constantly worked for peace in the world.” 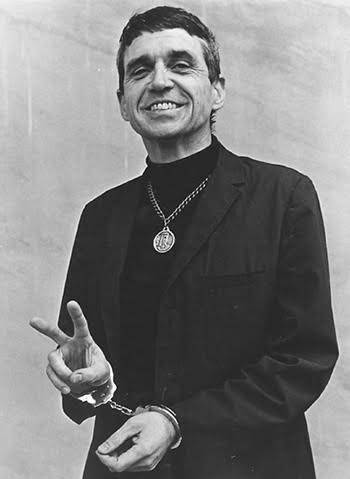 Father Berrigan, pictured following one of his many arrests for civil disobedience.

Father Berrigan is remembered as “sometimes an anarchist, always a pacifist” who spent his life protesting against violence and “American military imperialism.” As one of the Catonsville Nine Catholic activists, he became the first priest to be on the FBI’s most-wanted list, for burning military draft files. With others, he became a symbol of the anti-war movement during the United States’ involvement in Vietnam.

Father Berrigan served as Fordham’s poet-in-residence from 2000 until his death in April of this year, and often spoke to classes, in conjunction with the Peace and Justice Studies Program. He was a peace activist until his death.

“He participated in the Occupy Wall Street Movement when he was 90 years old,” said Brown. “He was so dedicated to peace and fairness, he gave everything he physically could.”

The lecture focused on key events, such as climate change, weapons dealing, war, and mass migration, that hamper the quest for peace. Brown invited those in attendance to join “the tribe of big hearted people” who act as bearers of light for the world.

“We, like Dan, must be the opposite of hyper-individualism,” said Brown. “We must root ourselves in a community that pulsates love and radiates life.”

The event marked the Tenth Annual Julio Burunat, Ph.D., Memorial Lecture. Burunat, a Fordham alumnus who received doctoral degrees in both philosophy and theology from the Graduate School of Arts and Sciences, lived Murray Weigel Hall on the Rose Hill campus as a Jesuit scholastic. Theology professor J. Patrick Hornbeck II, D.Phil., said the series hosts talks that “advance conversations about theology and religion that are both appreciative and critical.”

“We consider sharing these conversations with the broader world an obligation,” said Hornbeck. “We feel honored to extend these experiences to people who otherwise would not be able to have them.”