skip to main content
Return to Fordham University
You are at:Home»Colleges and Schools»Graduate School of Social Service»Beck Institute Receives $270,000 to Help Disadvantaged

Fordham’s Beck Institute on Religion and Poverty has received funding to support a program that helps domestic violence survivors, veterans, and those who have been homeless or formerly incarcerated. The program builds on the success of a similar program for the homeless run by Catholic Charities since 1989.

“We all have a history. I don’t care what happened—I love them no matter what.”
The Trinity Foundation gave $100,000. Kathy and Brian MacLean, both FCRH ’75, are contributing $170,000. The gifts will allow Fordham to continue community development with training and support for programs known as Coming Home, Living Well, and Homecoming, said Anita Lightburn, EdD, director of the Beck Institute and a professor in the Graduate School of Social Service (GSS).

The funds from Trinity will go toward those returning from prison in the greater New York Area. The MacLeans’ gift will match an earlier anonymous grant and go toward “capacity building” and research that evaluates the model’s effectiveness so that it can be replicated in other congregations.

Lightburn said she and her colleagues have been working with New York-area faith-based organizations to run life skills programs that help participants navigate life transitions and gain self-sufficiency while also offering a sense of belonging.

One vital aspect of the program, said Lightburn, centers on a home-cooked dinner with participants enjoying a meal with staff, volunteers and mentors. The group shares their experiences, hopes, and goals while around the dinner table; they form bonds that lead to trust. 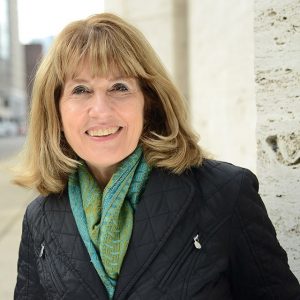 Donor Kathy MacLean said the program is a good fit for the Jubilee Year of Mercy.

“A program like this really represents the best of what GSS is about,” said Debra McPhee, PhD, dean of GSS. “It involves, research, student engagement, social justice, interdisciplinary collaboration, and service with society’s most disenfranchised.”

The program typically involves twice-weekly skill-building workshops on setting goals, preparing for the future, and dealing with traumatic pasts as they try to make make sense of their life stories.

A recent meal and workshop at the Reformed Church of Bronxville brought Coming Home alumni together with women who were just starting the program.

Volunteer Casmira Stricker, who worked for 44 years at Fordham before retiring, made the group meatballs and pasta, garlic bread, salad, and homemade carrot cake. The meal was served in a jovial atmosphere, but was anchored by participants shared stories of trauma and recovery.

The alumni laughed and hugged each other, almost all used the term “grateful” to describe the program, as well as the support they continue to get from each other, even after graduation from the program last spring.

“I usually kept everything to myself and everybody else was doing the talking,” said Ruthie. “What opened me up was story time, when we had to tell our story. Then I had my breakdown and ever since I got a big load off of me. I let go of that load.”

“We all have a history,” said Carol. “I don’t care what happened—I love them no matter what.”

A 2012 Beck Institute study found that the program significantly improved participants’ sense of well-being. Between 80 to 85 percent completed the program.

As the Bronxville evening drew to a close, Lightburn handed out survey forms for the participants to fill out—a continuation of the 2012 research.

“A program like this really represents the best of what GSS is about.”

Thanks to the funding, the institute will determine the cost-effectiveness of Coming Home across diverse areas— from the leafy suburbs to the dense urban areas.

But while the study focuses on results for the formerly incarcerated, Lightburn said that the volunteers leave the program transformed as well. She described Wall Street executives who began to empathize with men who had spent most of their lives in prison. It’s a notion that struck a chord with donor Kathy MacLean.

MacLean said her mother worked as a nurse and closely identified with her patients. She noted that many of the program’s participants wouldn’t be there if they had access to good mental health care before they became incarcerated, homeless, or abused. She added that since this is the year that Pope Francis declared as Jubilee Year of Mercy, there is no better time than the present to try to empathize.

“I hope this year opens more people’s hearts to forgiveness, to the people around them, and to people they would’ve dismissed out of hand, because they represent ‘the other’” she said.