skip to main content
Return to Fordham University
You are at:Home»Inside Fordham»Archbishop of Dublin Honored for Untiring Efforts to Renew Irish Church 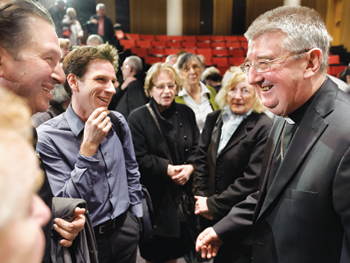 The Most Rev. Diarmuid Martin, Archbishop of the Archdiocese of Dublin and primate of Ireland, was awarded a Doctor of Humane Letters, honoris causa, at a ceremony at Fordham’s Lincoln Center campus on April 24.

“We here at Fordham, and indeed, everyone in the American church, are immensely proud with you. We see you as an inspiring figure not only for theChurch in Ireland, but also for the church universal,” said Joseph M. McShane, S.J., president of Fordham.

The conferring of the degree, at which the archbishop was presented a crosier custom-made by Fordham’s carpentry staff, was preceded by a lecture and panel discussion, “Catholic Ireland: Past, Present, Future.”

Archibishop Martin, who assumed his position in 2004, said that in many ways a comparison could be made to the nation’s economic woes, which have been exacerbated by strict austerity measures. Just as Ireland’s leaders misread the roots of the country’s previous economic successes, he said that the Catholic Church for far too long has felt safely ensconced in the old notion of a Catholic country. It has become conformist and controlling not just with its faithful but in society-at-large.

Faith in Jesus Christ must open us out beyond human horizons, he said. Christian faith requires changing our way of thinking, of trusting in God’s love rather than in the tangible securities of daily life.

Conformism in part has led to what he termed an extraordinarily high number of children who were abused by priests. Although overwhelming majority of priests lead exemplary moral lives, it does not excuse those failures, he said. The great challenge for the Irish Catholic Church today is to deal with strong remnants of inherited clericalism.