skip to main content
Return to Fordham University
You are at:Home»Living the Mission»Archbishop Addresses Orthodox-Catholic Reconciliation at Economos Lecture
Photos by Mike Trerotola
Fordham’s Orthodox Christian Studies Center welcomed His Eminence Archbishop Elpidophoros of the Greek Orthodox Archdiocese of America for a wide-ranging Sept. 21 lecture on the future of Orthodox-Catholic relations.

Speaking from the pulpit of the University Church on the Rose Hill campus, the archbishop traced the history of the Orthodox Christian and Catholic churches’ recent rapprochement and drew upon it for lessons for moving forward.

“Today, more than ever, we need to think not only about our differences, but how we can anticipate our churches being reunited through a rediscovered experience of communion,” Archbishop Elpidophoros said in a lecture that was broadcast live via Zoom and archived on YouTube. The event was part of the Economos Orthodoxy in America Lecture series, which was renamed this fall in gratitude for Christ and Anastasia Economos’ generous support of the Orthodox Christian Studies Center.

“[It is] a communion,” the archbishop said, “based on mutual recognition, a common confession of faith, the acceptance of diversity, liturgical sharing, synodality and conciliarity, mission and evangelization, subsidiarity, renewal and rebirth, and finally, the role of the papacy.”

The archbishop, who in May 2019 was elected the eighth archbishop of America since the establishment of the Greek Orthodox Archdiocese in 1922, touched on many of the issues that the two churches have been engaged in since Pope John Paul II’s 1999 visit to Romania on the invitation of Patriach Teoctist of the Romanian Orthodox Church.

That dialogue has proceeded in fits and starts, he said, but it is in and of itself a gift from God.

“The transformation of the dialogue of charity into the dialogue of truth, that is to say, the shift from gestures of rediscovered fraternity to an exchange of theological programs, marks the fruitful maturation and growing confidence to tackle the heart of our divisions,” he said. 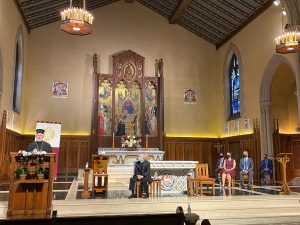 Thorny issues include reconciling the different ways Orthodox Christians and Catholics speak about the origins of the Holy Spirit, the possibility of celebrating Easter on the same date, and whether non-Orthodox spouses who marry Orthodox Christians should be allowed to receive communion.

Unfortunately, he said, it is getting harder, not easier, to resolve the conflicts that revolve around these issues. The movement behind unity, he said, is facing an identity crisis, in part because culture wars and geopolitical developments are influencing the conversations between Catholics and the Orthodox churches, and Orthodox Churches have been unable to speak with one voice. The future of Orthodox-Catholic relations depends on the condition of inter-Orthodox relations, he said.

“I am convinced that the future and mission of Roman Catholic and Orthodox relations here in the United States is to continue bear witness to God’s presence in the world, faithful to the spirit of Jerusalem, that we receive as a legacy,” he said.

Reflecting on the Economos’ recent gift, Christ Economos said the center’s mission to advance awareness and knowledge of Orthodox Christianity in modern public discourse is near and dear to their hearts.

“At these most difficult times in our world, the need is great for understanding and respect in all dialogue, and as we heard tonight, reconciliation, which is the most important of all,” he said, in remarks following the archbishop.
“The center, through lectures, such as this one, as well as scholarly publications, student initiatives, and Public Orthodoxy, the online blog, creates many opportunities for such important dialogues to unfold and advance.”