skip to main content
Return to Fordham University
You are at:Home»Inside Fordham»Annual McGinley Lecture Explores Mysteries of the Great Beyond

Few questions are harder to answer than “What happens when we die?”

Christians, Jews and Muslims answer that question in distinct ways, but on Nov. 14, Patrick J. Ryan, S.J., the Laurence J. McGinley Professor of Religion and Society, said that one thing they all share is an unwavering belief that whatever lies beyond, God is stronger than all of it. 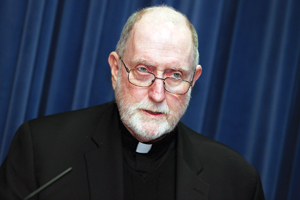 Father Ryan delivered the annual fall McGinley lecture, “Life After Death, Hopes and Fears for Jews, Christians and Muslims,” to a standing-room-only audience at Fordham’s Rose Hill campus, a day after delivering it at the Lincoln Center campus.

In keeping with his goal of facilitating a trialogue among the three Abrahamic religions, Father Ryan was joined by respondents Claudia Setzer, Ph.D., professor of religious studies at Manhattan College, and Hussein Rashid, Ph.D., adjunct assistant professor of religion at Hofstra University.

Father Ryan used his talk to give a rapid tour of the ways in which leaders from the three faiths approached the issue of bodily resurrection, weaving into it a personal story about a murdered student whose burial he oversaw while teaching in Ghana in 1979.
In the Jewish tradition, for instance, he cited passages from the books of Maccabees.

“These works reflect a strong hope for life after death, precisely in the form of resurrection of the body, nowhere more dramatically than in the account of the martyrdom of seven Jewish brothers and their mother who refuse to eat pork at the command of Antiochus,” he said.
When the second son defies Antiochus, before he dies he speaks of an afterlife: “‘You dismiss us from this present life, but the King of the universe will raise us up to an everlasting renewal of life, because we have died for his laws.’”

Christian attitudes toward life after death can likewise be seen in the retelling in the Gospels of a conundrum presented to Jesus by the Sadducees. If a woman married, one by one, seven brothers, and each of them died, which one would she be wedded to in the afterlife?
Jesus rebuts the Sadducees’ notion that life after death is just another version of life before death.

“[Jesus] argues that even in the Torah, the first five books of the Bible, the resurrection of the dead is implicit in God’s words spoken to Moses in the burning bush: ‘I am the God of Abraham, the God of Isaac, the God of Jacob,’” Father Ryan said.

“Following principles not untypical of Jewish exegetes in the early centuries of the Common Era, … Jesus interpreted the divine proclamation to Moses of God’s present relationship, I am, to the dead patriarchs as an assertion of a continuing relationship, even beyond the physical death of the patriarchs.”

Whereas the Gospels of the New Testament can point to the resurrection of Jesus as a foretaste of what lies in store for all who keep the Christian faith, Father Ryan noted that the Qur’an proffers no clear example of a past resurrection to Muslims.

“But [it]does adduce arguments in favor of the hope for resurrection, noting the parallelism between God’s creating everything in the beginning and God’s revivifying the dead at the end,” he said.

“They also say, ‘When we are reduced to bones and dust, will we really be raised up as a new creation?’ Say: ‘Even if you are stone or iron or some created thing even greater in your minds.’ Then they will say, ‘Who will bring us back?’ Say: ‘The One who made you the first time.’”

Harkening back to the grief that he felt in the presence of the corpse of his student in Ghana, Father Ryan praised Judaism, Christianity, and Islam’s perspectives.

“There is something much more satisfying, intellectually and spiritually, about life after death conceived as the resurrection of the body than of life after death as the pale survival of a soul in the manner of the shades in the Greek underworld. Jews, Christians and Muslims have all looked forward to resurrection as a bodily event, albeit a transformed bodily event, the fruition or flowering of the spiritual-corporeal whole that is you or me,” he said.

“None of us is hoping for the resuscitation of our aging carcasses, so that we can grow older and older, more and more feeble, in some preternatural Florida. Resurrection of the body promises much more and much better than bodily prolongation. In that resurrected future I hope to meet not only the risen Jesus, but my family and friends as well, including my student whom I buried more than three decades ago.”