skip to main content
Return to Fordham University
You are at:Home»Editor's Picks»“And Just Who is My Neighbor?” A Statement From Joseph M. McShane, SJ, President of Fordham

Dear Members of the Fordham Family:

A week ago, we celebrated the 240th anniversary of the adoption and promulgation of the Declaration of Independence. As is always the case, we celebrated the Fourth of July in a particular American way. That is to say, we didn’t observe our nation’s birthday with military parades, but with barbecues, baseball games, long lazy days at the beach, and with fireworks displays accompanied by patriotic music. In other words, we celebrated in a way worthy of a peaceable nation of neighbors. 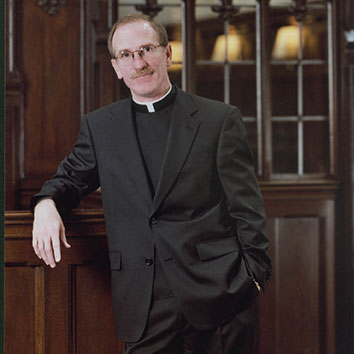 Sadly and tragically, however, the feel-good experience of the Fourth of July was followed by a series of incidents that made it clear that the experiment in creating a new nation that was conceived in liberty and dedicated to the proposition that all men and women are equal heralded by our forebears was not working as they intended it to. Indeed, the tragic and senseless deaths of Alton Sterling in Baton Rouge, and of Philando Castile‎ in suburban Minneapolis, and of Officers Lorne Ahrens, Michael Krol, Michael J. Smith, Brent Thompson, and Patrick Zamarripa in Dallas revealed racial and socioeconomic fault lines that both divide us and threaten to create a permanent state of interracial distrust in our nation.

In the immediate aftermath of the deaths of Mr. Sterling and Mr. Castile, President Obama rightly pointed out that, “When incidents like this occur, there’s a big chunk of our fellow citizenry that feels as if because of the color of their ‎skin, they are not being treated the same. And that hurts. And that should trouble all of us. This is not just a black issue. It’s not just a Hispanic issue. This is an American issue that we should all care about. All fair-minded people should be concerned.”

I believe that there are contained within the President’s words both an honest admission of a troubling truth about American society (that we can wrongly and all too frequently think that racial issues are issues only for members of the African-American, or Hispanic, or Asian-American communities) and a challenge/invitation for all Americans to own and address the tensions that have boiled over so violently in the course of the past week (and in the course of the past year).

Before we could adequately process and respond to the President’s words, the Dallas shootings occurred. A nation that was already reeling from the deaths of Mr. Sterling and Mr. Castile was brought to its knees ‎by the deaths of the five officers. Faced with the unspeakable horror of this latest event, President Obama spoke out once again, and once again his words were as honest as they were eloquent, and once more they contained both a challenge and an invitation: “There is sorrow, there is anger, there is confusion about next steps. But there’s unity in recognizing that this is not how we want our communities to operate. This is not who we want to be as Americans.”

As you might imagine, I reflected (indeed meditated) on the President’s words all weekend. As I did so, I asked how the Fordham family could and should respond to the challenges that the events of past week have presented to us. Of course, we will pray for the repose of the souls of those who died last week in Baton Rouge, Minneapolis, and Dallas. We will also pray for those whose lives were forever changed by their deaths, especially their wives and life partners, their children, and their parents. Moreover, in company with other colleges and universities, we will also recommit ourselves to the work that is proper to us as an academic community. That is to say, we will recommit ourselves to the work of educating for justice and to doing all we can to figure out how our beloved nation, to paraphrase President Lincoln, conceived in liberty and dedicated to the proposition that all are created equal, has allowed itself to stray from the ideals upon which it was founded (and which we celebrated with such heartfelt pride just a week ago).

As I have told you before, I believe that the issues that divide and challenge our nation are not merely political or social issues. Rather, at heart they are moral issues. Therefore, I believe that precisely because we are a Jesuit institution, we have a special responsibility to reflect on the events of the past week and on the challenges that they have created for our nation in particular moral terms. Since I am a Jesuit, you will both understand and forgive me if I say that I think that the Fordham community is invited in a special way to reflect on these issues in the light of the Gospel. ‎My conviction was strengthened when I read the Gospel that Christians throughout the world heard proclaimed Sunday in their worship services: the parable of the Good Samaritan. A much-loved parable, the story hinges on a simple question put to Jesus by one of his opponents: “And just who is my neighbor?”

Because the parable is so widely known and the Good Samaritan has achieved status as a remarkable example of compassion in action, the challenging part of the parable is sometimes lost. In order to get a handle on just how challenging the parable is, we have to remember that the Samaritans were a despised group for the people to whom Jesus was speaking. Not to put too fine a point on it, they were seen as both ethnic outsiders and heretics. Therefore, the lawyer who posed the question to Jesus would have been deeply offended by Jesus’ very positive presentation of the figure we have come to know as “The Good Samaritan.” And then there’s the poor man who fell among robbers. He, too, would have been challenged by the fact that he was abandoned by the priest and Levite, the holy men of his own tradition, but saved, consoled, and cared for by a hated outsider. Both cases (the case of the lawyer posing the question and the victim assisted by the Samaritan) are used by Jesus to challenge His hearers to an examination of consciousness and a conversion of heart. In both cases, Jesus invites his audience to see people through God’s eyes and to respond to those who suffer with God’s heart.

And so we have in Sunday’s Gospel a strong hint as to what we, as a Jesuit university community, can and should bring to the national conversation on the events of the past week. What do I mean? Just this: We can remind our students (and ourselves) that ‎the situation in which the nation now finds itself is one that requires us to engage in an honest examination of conscience and consciousness so that we can be what God wants us to be, and what President Obama calls us to become once again: “who we want to be as Americans.” If we are willing to engage in this examination of consciousness, we will be able to take the first step toward the conversion of heart that will free us from the bondage of anger, frustration, and suspicion that holds us back.

Before concluding, I would like to share with you some of the reflections on the parable of the Good Samaritan delivered by Pope Francis (that champion of the poor and marginalized) Sunday as part of his Angelus address in St. Peter’s Square. Although he was not directly addressing our nation’s condition, I believe that his words offer us a way forward. May God our Lord bless our efforts as we seek peace, justice, and healing for America and all of its citizens.

‎Pope Francis on The Good Samaritan

It is not up to us to try to categorize people, to see if they count as our neighbors. Rather, the decision to be, or not be a neighbor, depends on us. It depends on me. It depends on me to be or not be a neighbor to the person I meet who has need of my help, even if he’s a stranger, or even hostile. And Jesus concludes: “Go and do likewise ‘(v. 37). It’s a great lesson! And He says to each of us: “Go and do likewise,” especially to the brother or sister you see in trouble. “Go and do likewise.’” Do good works, do not just say words that go to the wind. A song comes to mind: “Words, words, words.” No. Please, do. Act. And by the good works that we do with love and joy for others, our faith grows and bears fruit. Let us ask ourselves – each of us responding in our heart – let us ask ourselves: Is our faith fruitful? Does our faith produce good works? Or it is rather sterile, and therefore more dead than alive? Am I ‘the neighbor’ or do I simply just pass along? Or am I among those who select people according to their own pleasure? It’s good to ask ourselves these questions and often because, in the end, we will be judged on the works of mercy. The Lord will say to us: ‘But you, you remember that time on the road from Jerusalem to Jericho? That man was me half dead. Do you remember? That hungry child was me. Do you remember? The migrant who many want to drive out it was me. Those grandparents alone, abandoned in nursing homes, it was me. That sick person alone in the hospital, that no one goes to see, was me.’