The campaign is called “American Values Religious Voices: 100 Days” and four Fordham theologians have been tapped to participate. For the first 100 days of the new administration, the project will send one letter per day to President Donald Trump, Vice President Mike Pence, Cabinet secretaries, and members of the House and the Senate.

Karina Hogan, Ph.D., an associate professor of theology and one of the participants, helped recruit scholars during the early stages of the project. Hogan, whose letter was published on Feb. 4, said that the scholars had to break out of their academic comfort zones, as well as their scholarly tones, to make their letters effective.

“We need to represent the broadest views of theology to the general public,” she said. 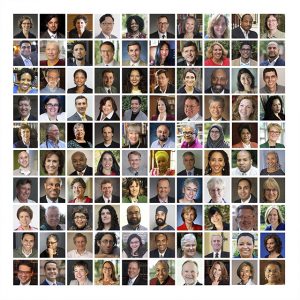 One hundred theologians are participating in the project.

The campaign is the brainchild of Rabbi Andrea Weiss, Ph.D., an associate professor of the Bible at Hebrew Union College-Jewish Institute of Religion in New York. Rabbi Weiss said some of the letters are combative, while others are hopeful. She has sought to modulate the tone daily. In addition to Hogan, three other professors from Fordham’s Department of Theology have been invited to write: Associate Professor Michael Peppard, Ph.D., Professor Bryan Massingale, S.T.D., and Professor Aristotle Papanikolaou, Ph.D., professor of theology and the Archbishop Demetrios Chair in Orthodox Theology and Culture.

Rabbi Weiss said that finding a diversity of viewpoints was a major part of the effort to portray a “collective wisdom of our faith communities and their sacred texts.” She noted that scholars of all stripes often find themselves cloistered among colleagues who share their area of expertise. For that reason, an advisory committee sought to include scholars of many facets of Christianity, from Orthodox to Protestant to Catholic, as well as denominations within Islam and Judaism. They also sought out scholars from all regions of the country, with writers hailing from 21 states.

But with events unfolding at such an extraordinary clip, the project has become all the more important, she said. Letters sometimes need to be updated moments before being published, as was the case with a letter written by Papanikolaou.

That letter, published on Feb. 1, initially pleaded that the president retract a campaign “declaration” that would be “blocking Muslims from entering this country.” By press time the “declaration” had become an executive order.

“The letters often need a subtle tweak of language, because things that people wrote about as theory a week earlier may be the reality today,” Rabbi Weiss said. “I have a stack of 40 letters ready to go, and they all seem so pressing.”

Hogan and Peppard also address the issue of immigration their letters.

Peppard’s Jan. 26 letter spoke of researching his family tree back to when his family fled the Irish Famine. He noticed that there was no reference to the family’s religion. When he asked a librarian why, she told him that in the United States, the government does not keep a record of the religious affiliations. He said she told him “It’s a principle of religious freedom, and the potential for abuse of such records is too dangerous.”

In her letter, Hogan noted that though it is often overlooked, the Hebrew Bible’s Book of Ruth is also a story about the sacrifices immigrants make. She writes that after Naomi and her two Moabite daughters-in-law, Ruth and Orpah, have been widowed, Naomi decides to leave Moab and return to her hometown of Bethlehem. She urges her daughters-in-law to go back to their families, but Ruth refuses to abandon her mother-in-law. Hogan quotes Ruth from the scripture:

“Do not press me to leave you or to turn back from following you! Where you go, I will go; where you lodge, I will lodge; your people shall be my people, and your God my God.’” 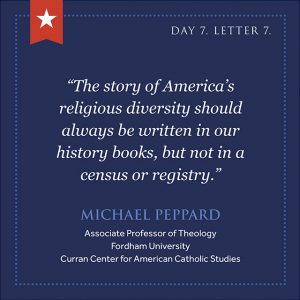 Once in Bethlehem, Ruth takes work in the fields harvesting grain to help support Naomi. There she meets her future husband, Boaz, who treats the foreign-born woman with kindness. They eventually marry and she gives birth to Obed, the grandfather of King David.

Hogan said that Ruth’s sacrifices parallel those of immigrants here who leave the comforts of home to take low-wage jobs in the United States in the hopes of creating a better life for their families.

In her letter Hogan urged the leaders to be as welcoming to immigrants as the people of Bethlehem were to Ruth. In discussing the letter writing campaign she stressed the importance of reading religious texts closely, regardless of religion, in order to better understand contentious issues we face today.

“It’s more important than ever, in this time of racism and intolerance,” she said, “to think about what it means to be a human being—and that’s what theology is all about.”