skip to main content
Return to Fordham University
You are at:Home»Inside Fordham»American Catholic Sisters Hold Pivotal Role in the Church

And since the 1965 close of the Vatican II, women religious have embraced the changing times, said panelists of “Call and Response: How American Catholic Sisters Shaped the Church Since Vatican II.”

The discussion, which was sponsored by the Center on Religion and Culture, filled Pope Auditorium on Dec. 11. Moderated by Christine Firer Hinze, Ph.D., professor of theology, the panel featured: 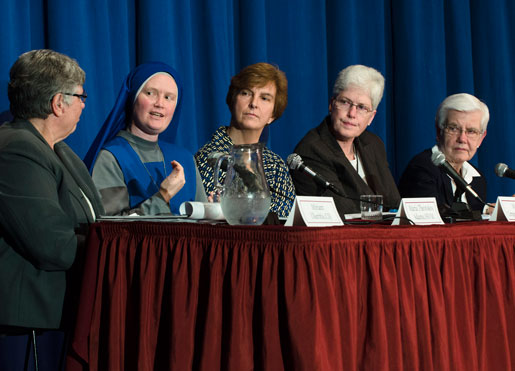 Sister Gottemoeller said that the 1965 Decree on the Adaptation and Renewal of Religious Life mandated comprehensive change in accordance with the needs of the era.

The decree required that sisters’ living, praying, and working must adapt to the physical and psychological conditions of contemporary religious communities, cultural requirements, and social and economic circumstances. Religious communities were to adjust their governance accordingly.

“Can you grasp the scope of that?” Sister Gottemoeller said. “It [affected]congregations with hundreds of years of history. We were to go back to the source and update everything… And this wasn’t an activity for the leaders. This was an activity for every member.”

Changes that followed, such as sisters seeking professional credentials, driving cars, and wearing modified habits or contemporary clothing, were radical, but certainly not rebellious.

“People suggest that we were in a state of defiance,” she said, “But as we look back, what can’t be said too often was that change was an act of obedience to the church.”

Sister Johnson, who attended Catholic primary school, secondary school, and college throughout the 1960s and 1970s, witnessed changes in her teachers, which was more than just “change in external habit.”

“I saw them cross all kinds of lines: Ethnic lines, going all around the parishes of the city. Racial lines, becoming involved in civil rights initiatives. Ideological lines, becoming engaged with the anti-war and the social movements. And also class lines. They could work with well-to-do people on a fundraiser and then [visit]a homeless shelter in the evening. And they did it with aplomb.”

Nor did they balk at crossing educational lines, Sister Cimperman echoed. She told the story of Sister Madeleva Wolff, who in 1942 was appointed by the National Catholic Educational Association to devise a solution to the shortage of theology teachers.

Sister Wolff began by asking graduate theology programs to admit women religious and lay people, but every school refused. Faced with a seemingly dead end, she announced that St. Mary’s College, where she was president, would set up a program of its own. By the time the school closed 25 years later, it had granted 76 doctoral and 35 master’s degrees in theology to sisters and the laity.

“This is where women religious tend to come in,” Sister Cimperman said. “All options are gone, and yet they have hope and see beyond.”

The panel discussed the “freedom and constraint” of the vows of poverty, chastity, and obedience. According to Sister Ukeritis, the vows do not hinder women religious, but rather, help them to confront natural human inclinations.

“The vows give us a way of dealing with those very powerful human drives, needs, and issues,” she said. “They give us a way of addressing them, of being aware of them, and communally asking how do we deal with money, sex, and power in ways that are life-giving?”

The panel also addressed the so-called vocation crisis—the dearth of women entering religious life. Currently, only 1,200 women in the nation are in the formation period.

“Being Catholic isn’t taken for granted anymore,” said Sister Adams, who entered religious life in 2001. “We’re not a generation that’s growing up in the Catholic-only environments of [parochial]school.”

“This is an issue of the whole church,” Sister Johnson said. “This has tremendous implications for [its]future. In the tasks that make up parish and diocesan life, much of the labor is done by women. If these projections hold, then years from now we will see a very diminished labor pool in every organization of the church’s life. It will be a very different church in the United States.”

The event was co-sponsored by the Francis and Ann Curran Center for American Catholic Studies.