skip to main content
Return to Fordham University
You are at:Home»Inside Fordham»Alumni Chaplain’s Leap of Faith

On May 5, 2011, Alumni Chaplain Daniel J. Gatti, S.J., performed his first parachute jump—at age 69—with the U.S. Army’s Golden Knights Parachute Teamat the Joint Base in Lakehurst, N.J. (if the name sounds familiar, it’s because it is the crash site of the Hindenburg).

Father Gatti was in Lakehurst as a friend of Xavier High School, whose X-Squad Drill Team was performing at the three-day Army-sponsored event. His thoughts on the jump are below. 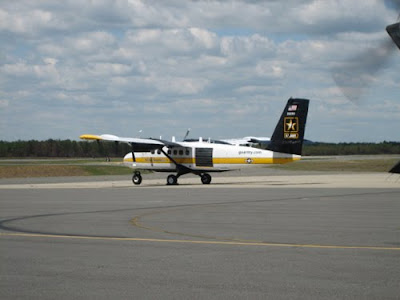 From my perspective as a Jesuit, I somewhat jokingly call my tandem jump a “leap of faith.” And so it was. Not, however, in the theological sense of a movement to belief in God, but in the basic sense of trust; trust in the U.S. Army, its plane, its equipment and its personnel; trust that all elements would work together for a successful jump! 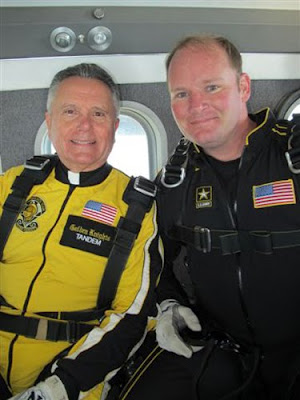 How did I feel about doing this? I felt euphoric, extremely happy to be able to do something exciting I had never done before. Once in the plane and ascending to 13,000 feet, I had the sense that “this is it; the time has arrived; no thought of changing my mind now.” I had willingly boarded this plane; I will willingly tandem jump from this plane and “return to earth.” 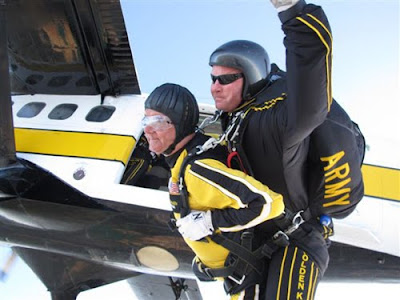 The initial free fall lasted about 60 seconds and the two of us were falling at 120 miles per hour. With our arms and legs now extended, my partially exposed face felt like it was about to freeze. My Army instructor and Golden Knight, Greg, then pulled the chute and we quickly came to a sudden but not jolting stop. In reality we were still descending, but for a moment the sensation was that of absolute stillness, with a blue sky all around us, and a familiar terra firma beneath us. To the northeast I could see the skyline of New York some 85 miles away, and to the east the New Jersey coast and the expansive Atlantic Ocean beyond. All was simply beautiful. 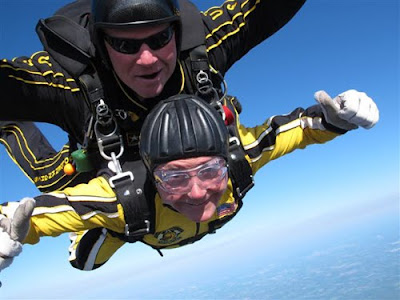 Our full descent took a few minutes more, with only sounds of wind gushing through and around our chute to accompany us. Then with land seemingly rising up to meet us, we made our approach to the target area and made our landing—not as soft as I would have liked, since I jammed my knees, but a welcomed landing none the less. Greg later described it as “a little bumpy.” 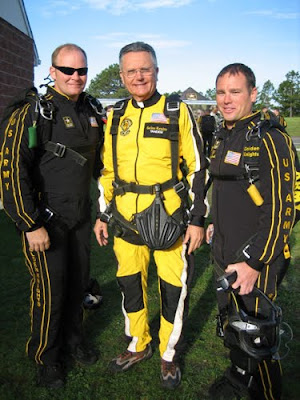 Certainly it was an experience making one feel fully alive! Yes, given the opportunity, I would be willing to jump again. Certainly it was the highlight of my two days at the event. But what impressed me most was the caliber of the Army personnel I met. Not for nothing is their current motto Army Strong! These are men and women battle tested and mission ready; confident, fit, crystal clear in eye and in speech, exuding an admirable strength of character for which all Americans can be extremely proud.