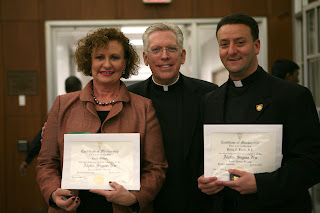 On Thursday, April 12, over 100 students representing all ten schools of the University were inducted into the Fordham chapter of Alpha Sigma Nu, the National Jesuit Honor Society, as it celebrated its 30th year on campus.

Following welcoming remarks from Joseph M. McShane, S.J., president of Fordham, and Stephen Freedman, Ph.D., provost, Msgr. Joseph G. Quinn, vice president for University Mission and Ministry, presented the awards to each student along with the deans of the schools.