In the midst of one of my solitary walks around the Rose Hill Campus this week, I found myself drawn to Loyola Hall. Although Loyola is now a residence hall for freshmen, for 85 years it served as the primary residence for the Fordham Jesuit Community. Therefore, I know Loyola quite well. I wish that I could tell you that I just kind of drifted into the building, but that would be a lie. A damnable lie. As I said above, I was drawn to the building and drawn there for a reason. I wanted to visit two old friends in the chapel. That is to say, I wanted to pray in front of one of the stained glass windows in the old house chapel on the first floor. 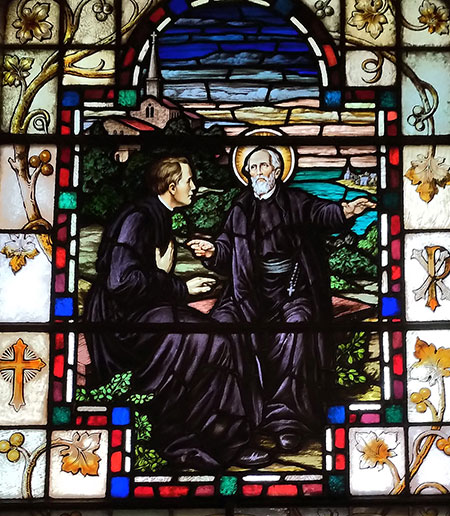 And so after I slipped into the chapel by the back door, I walked past the windows featuring the “bigs” in Jesuit history: Saint Ignatius, Saint Francis Xavier, Saint Peter Canisius and Saint Aloysius Gonzaga and made my way right to the window I was looking for. And there they were: Saint Alphonsus Rodriquez (1533-1617) and Saint Peter Claver (1580-1654). Old friends to me and to one another. Friends in the Lord. Companions in Mission. Jesuits from the Society’s golden age. Engaged in an earnest conversation on a rise overlooking the Mediterranean Sea. And what a conversation it was.

Saint Alphonsus (whose name the English majors among you may recognize from a poem written about him by Gerard Manley Hopkins, S.J.) was a Jesuit laybrother who served as the porter of the Jesuit residence on Majorca, an island in the Balearic Islands, for forty years. A mystic, he was revered in Spanish Jesuit circles as both an insightful spiritual director and a master of the inner life. As for Peter Claver, he was the youngest son of a well-to-do family from Catalonia who entered the Society in 1602. Shortly after he pronounced his first vows, he was missioned to Majorca for further studies. Almost immediately after his arrival on the island, he met the 72-year-old Alphonsus and became one of his spiritual directees. In the course of their almost-daily conversations on a bluff overlooking the sea, Alphonsus sensed that Peter was eager to do great things for God. Therefore, Alphonsus urged him to offer himself for service in the Americas. Peter listened to him and found that his heart burned whenever he considered giving himself to the work that the members of the Society were doing in their missions in South America. The seed was planted. In the conversation captured in the stained glass window in Loyola Hall. A conversation between a wise old man and an earnest young man dreaming of doing great things for God.

Moved to action by his conversations with Alphonsus, Peter wrote to his Provincial and begged him to send him to South America. His prayers were answered when, in 1610, he was missioned to Colombia. After completing his studies there, he was ordained in Cartagena in 1616 (the first Jesuit to be ordained in Colombia). Immediately thereafter, he began what would be his life’s work: service to the African slaves who were transported from West Africa to Cartagena to work in servitude on the vast plantations around the city. (It was at the beginning of his ministry that he took a private vow to “be a slave to black slaves” for the rest of his life. When he was solemnly professed in 1622, he made that vow more public when he signed his vow formula Petrus Claver, aethiopum semper servus (Peter Claver, servant of the Ethiopians [i.e. Africans] forever). He fulfilled that vow. Humbly. Energetically. Lovingly. Completely. Till his death.

Now, Peter Claver may have been a dreamer, but there was nothing dreamy about him. He was practical to the core. Whenever he heard that a slave ship was about to arrive in the port of Cartagena, Peter would work his way through the city begging for fruits, biscuits and sweets that he could offer the slaves as soon as the ship docked. When it did, he went on board and first attended to those who were strong enough to get to the decks. Then, he would descend into the stifling cargo holds to visit and minister to the most compromised and vulnerable slaves onboard: the sick and the dying. He washed them. He nursed them. He bound up their wounds. He clothed them. He fed them. He held the hands of the dying. Then, he carried them on his back to the decks above so that they could get fresh air after their hellacious journey to Colombia.

Year after year (for thirty-five years), Claver gave himself to this work. In the course of his ministry, he baptized over 300,00 of the slaves (and spent the off-season when no slave ships arrived in the harbor visiting and ministering to his flock–and demanding that they be given their rights as Christians). He treated them with love and dignity. He saw what he did for those whom he attended and cared for as simple Gospel-driven Christian charity. Others saw things differently. The powerful of the city saw his actions as downright dangerous—even seditious. Therefore, he was scorned by the slave owners and denounced as a disruptive nuisance by the royal and civil authorities. He didn’t care. For him, service was honor. And honor was service. He refused to stand down. He refused to abandon his beloved flock. His heart simply would not let him do so. Rather, he defended them. He stood with them. And he considered himself to be the most fortunate of men because he had the honor of being “their slave for life.” In explaining why he did what he did, he recounted the advice that he had received from Alphonsus when he was a young Jesuit yearning to do great things for God: “Look for God in all men and serve them as images of Him.” And so he did.

When a plague swept through Cartagena in 1650, Peter was not surprisingly on the front lines tending the sick, comforting the dying and consoling the grieving. His kindness and devotion, however, cost him his own health. He never really recovered from the ravages of the plague and spent the last four years of his life as an invalid. Hunkered down in his room in the Jesuit residence to which he was assigned, he prayed for the men and women to whom he had devoted his life and received them with his characteristic warmth whenever they snuck in to visit him. When, in early December of 1654 word got out that he had been anointed and received the Eucharist as Viaticum (food for his journey to eternal life), the citizens of Cartagena (slave and free, mighty and poor alike) flocked to his room to bid him farewell. (Convinced that he was a saint, they stripped his room bare to get relics by which they could remember him.)

And so, my sisters and brothers, I hope that you will understand why, at this perilous time, I found myself drawn irresistibly to that window in Loyola Hall. To visit two old friends. The old lay brother porter/mystic and the earnest young scholastic who dreamed of doing great things for God. One never left home. Rather, he spent his life lovingly welcoming anyone who knocked on the door of the Jesuit residence on Majorca. The other never returned home. Half a world away, he found a new home for his heart. There, he spent his life lovingly doing all he could to serve and to bring dignity to those whose journeys in life were filled with sorrow, hardship and abuse. Seeing in them the image of God Himself. Offering them a welcome from his heart and into his heart. As I gazed at them deeply engaged in what turned out to be a life-changing conversation, I got a catch in my throat. My eyes filled with tears. My heart was washed over by waves of powerful emotions: pride, gratitude and awestruck wonder. And I prayed. Earnestly. Lovingly. I prayed in thanksgiving for the generosity of heart that each of them had. As I prayed, I also commended our wounded nation to the prayerful care of the two saints on whom I gazed through tear-filled eyes in the stained glass window in my old home: Alphonsus and Peter, men who learned how to “Look for [and find]God in all men [and women]and serve them as images of Him.”

I hope that you will not mind if I tell you that in my final prayer before their images, I prayed for all of you (and myself): that we might have some share in their selfless goodness, and that we might never lose our ability to dream of doing great things for God and His people. Dreams of doing great things for God. Great Things for God. And for His people. Especially for His beloved poor. This is certainly the time and the moment for such dreams. May we all live to realize them.

Be assured of my prayers every day. Every hour of every day.

A Prayer in the Midst of the Present Crisis

God of all mercies, grant:
To the Fordham family, safety and good health:
To those afflicted with COVID-19, swift healing;
To the frightened, courage;
To the dying, comfort;
To the dead, eternal life;
To health care providers, strength and stamina;
To our leaders, wisdom and compassion;
To our nation, unity of purpose;
To the Church, the grace to serve the suffering selflessly;
To all believers, strong faith in Your presence;
To the whole human family, unity of heart; and
To us, Your servants, the reward of knowing that we are doing Your will when we spend ourselves in loving service of others.