skip to main content
Return to Fordham University
You are at:Home»Living the Mission»A Pastoral Message from Father McShane | Sunday, May 17, 2020
The Miraculous Catch of Fish, Unknown Romanian Iconographer
Dear Members of the Fordham Community,

Walking into the Church of Saint Francis Xavier on 16th Street in Chelsea is quite an experience. In creating an imposing example of what could only be called Victorian Baroque architecture, its architect went out of his way to build a church that was at the same time inviting and imposing. Inclusive and dramatic. Welcoming and eye-popping. All at once.

You are tipped off to the numinous experience that awaits you within when you step into the narthex and are greeted with these words from the Third Book of Kings: Sanctificavi domun hane ut ponerem nomen meur ibi et erunt oculi mei et cor meum. (For those whose Latin may be a bit rusty, the parish staff have—thank God—supplied a handy translation: I have sanctified this house and put my name there forever, and mine eyes and my heart shall be there always. 3 Kings ix, 3.) Ah, you are forewarned: You are entering the home for God’s own heart. Quite a promise or warning. Brace yourself.

If anything, the bold proclamation/warning is a bit too tame. “Sensory overload” may be an understatement. No. I take that back. “Sensory overload” is an understatement. As soon as you walk through its imposing front doors, you find yourself in a church filled (crowded really) with statues, murals, and stained-glass windows that give you the inescapable suspicion that the architect issued a casting call for the Communion of Saints as he decorated the place. (And the saints seem to have to been delighted to respond to his call. They are everywhere. In quite extraordinary numbers. On pillars. On the walls. On the ceiling. On altars. In niches. In murals (including a dizzying mural of the apotheosis of Saint Francis Xavier high above the main altar). In stained-glass windows. As I said, they are everywhere, and I mean everywhere. O, and by the way, it seems that Saint Ignatius made it very clear to his canonized brethren that he expected all of the Jesuit saints to show up in force so that his best friend from college—that would be Francis Xavier—was honored appropriately in the New York church named for him. As I said, it’s an eye-popping, sensory-overloaded experience.  As you stand there, you find yourself saying, “That quotation from Third Kings was right. God’s heart really is here.” And that sacred heart must be delighted to be in the presence of so many of His friends in a place where He breaks bread daily with them and His latter-day companions.

But then, as you prepare to leave this swirling sanctuary of holiness, you find yourself face to face with another quotation from Scripture, a quotation from Genesis 28 that is downright confusing. Provocative. Unsettling. A quotation that calls into question your judgment that this is, indeed, the home for God’s heart. For you see, when you face the back of the church on your way out, you are confronted with this challenging inscription: Non est hic aliud nisi domus Dei et porta coeli. (Interestingly enough, the kind staff doesn’t provide a translation for this one. Therefore, let me supply it here: This is nothing other than the house of God and the gate of heaven.)

Huh? I must confess that the first time I saw it, I was thrown for a loop. I wondered if the architect had intended to have it greet the congregation as they entered the church, but the contractor put it in the wrong place. I wondered if some clever Jesuit had put it there to nudge the congregation to turn around to take a final glance at the magnificence of the church before they went back to their daily lives. Or was there some hidden meaning to its placement? Was there a deeply Ignatian insight involved in its placement? Was the inscription not referring to the church at all, but to the world that we enter when we leave it? I was stumped. I was at a complete loss.  Until. Until. Until I remembered the message that Jesus asked the angels to deliver to the apostles on Easter morning. You remember it. As well and as lovingly as I do. “Tell my brethren to go to Galilee where I will meet them.” 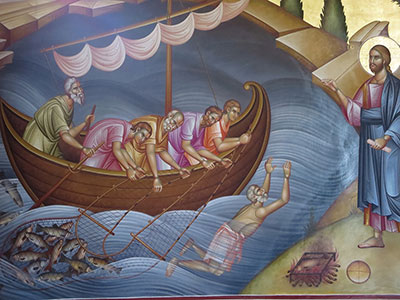 Hmmm. What was He telling them? And what are we to make of His instructions? A lot. When the apostles finally made their way to Galilee, however, it was not apparently with the intention of meeting up with Him. Rather, as the story opens up in the 21st chapter of Saint John’s Gospel, they seem to have gone back to their trade. That is to say, they went back to fishing. Business as usual. After the Resurrection. Skilled fishermen that they were, they knew that night fishing offered them the best chance of landing a big haul. (Who knew?  I certainly didn’t, and I suspect that you didn’t know either. Come clean.) In any event, they struck out. The night was long. And frustrating. In other words, they landed nothing. Nada. And so, they made their way back to shore with embarrassingly empty nets. As they were pulling close to the beach, a decidedly playful Jesus, acting as a friendly “spotter,” asked them if they had any fish. No. None. Then, He told them to throw their nets out again. They followed His instructions and landed a catch of 153 fish. (Don’t ask. After 2000 years, no one knows the significance of that number.) In any case, the catch was so large that their nets began to break. Then and only then were their eyes opened. The ever-impulsive Peter threw on his clothes (again, don’t ask) and jumped into the water to make his way to Jesus. When they all got to the beach, Jesus prepared breakfast for them: a breakfast of fish and bread, enriched by some of the fish they had just caught. How typical of Him. How very Jesus of Jesus. Breaking bread with them. Serving them. Just as He had done at the Last Supper. After what must surely have been a playful and loving meal with His companions (those with whom He broke bread and welcomed into His own family), Jesus commissioned Peter to tend and feed His sheep.

Please note that this encounter did not occur in Jerusalem. It occurred in Galilee. It occurred, therefore, where the apostles lived. Where they plied their trade. The Lord encountered them there. Moreover, in this encounter, Jesus didn’t intrude on them (as He had in the Upper Room).  He didn’t catch up to them (as He had on the road to Emmaus). In this encounter, Jesus was there before they arrived. Waiting for them. On their home turf. And it was there that He broke bread with them. Where He added the fruits of their own labors to the ingredients of the breakfast He prepared for them. It was there that He served them. It was there that He drew them once again into His family. And it was there, on their home turf where they made their living, that He commissioned them to feed His sheep and confirmed their call to be His companions in the mission that He had received from His Father. To tend His flock. So that they could draw them (the flock they tended) into the same circle of love that the Apostles occupied.

As we shoulder this new burden, this work of grace, let us always remember the advice that Saint Alphonsus Rodriguez gave to his young friend, Saint Peter Claver: “Look for [and find]God in all men [and women]and serve them as images of Him.” In the world that God has placed in our hands as we begin to emerge from the hunkered down existence through which we have been living. For that is where God has placed us, and where we can find, celebrate, and serve Him.  In the tangle and the glory of human life.

When I began this series of pastoral reflections, I promised myself that I would send you one each Sunday till the end of the school year. That year ended yesterday, with the (virtual) Commencement Exercises for the Class of 2020, the Visionary Class, the 175th class to graduate from our beloved Fordham (and hence our Dodransbicentennial Class). And so, my sisters and brothers, this is the last time that I will intrude on the blessed quiet of your homes on Sunday morning. (Thank you for welcoming me to your kitchen tables with such warmth.)

In spite of the fact that I will not be sending you regular pastoral reflections, please be assured of my prayers every day. Every waking hour of every day.

A Prayer in the Midst of the Present Crisis

God of all mercies, grant:
To the Fordham family, safety and good health:
To those afflicted with COVID-19, swift healing;
To the frightened, courage;
To the dying, comfort;
To the dead, eternal life;
To health-care providers, strength and stamina;
To our leaders, wisdom and compassion;
To our nation, unity of purpose;
To the Church, the grace to serve the suffering selflessly;
To all believers, strong faith in Your presence;
To the whole human family, unity of heart; and
To us, Your servants, the reward of knowing that we are doing Your will when we spend
ourselves in loving service of others.