skip to main content
Return to Fordham University
You are at:Home»Law»Although She Beat the Travel Ban, Iranian Law Alumna Faces New Challenge
Fahimeh (Farimah) Kashkooli waves goodbye as she and Alma leave the airport. Photo by Bruce Gilbert
It was the 72 hours from hell.

On Feb. 6, 2017, Fahimeh (Farimah) Kashkooli, LAW ’17, made her way with a Fordham Law contingent to John F. Kennedy Airport, where her 12-year-old daughter Alma was scheduled to arrive for desperately needed medical treatment.

Alma, who suffers from a rare congenital disorder of glycosylation or CDG, was supposed to undergo surgery on Jan. 23 in Pittsburgh, but her trip was held up, first by bureaucratic delays and then by the executive order signed by President Trump on Feb. 1 barring entry from six predominantly Muslim countries, including Kashkooli’s native Iran. Without the surgery, there was a risk that Alma could go blind. 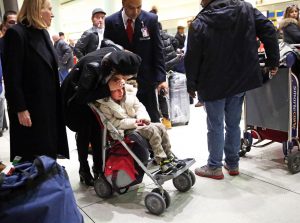 Kashkooli currently lives in Manhattan with Alma. Life is less chaotic than it was a year ago, but the experience still brings her to tears. Because Alma’s father and nanny were denied visas at the time, and she didn’t know whether she’d be able to return to the United States if she flew home to retrieve Alma, she had to rely on Shaimaa Hussein, an associate at Willkie Farr, to fly to Istanbul and escort her on the flight. When Alma’s father attempted to hand her off to Hussein, airport authorities balked. Kashkooli, who was on the phone in New York, could only offer encouragement as he tried to get Alma on the plane. 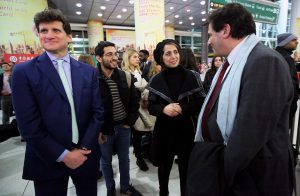 “They found a boy on the airport staff, and they said to him, ‘Take this wheelchair. See the child in that side of the gate? Put the child in, and bring her here. Quickly, because there’s no time. They are just boarding to the plane,’” she said.

“My husband was in tears. I said ‘Don’t worry, things are going to be okay, I know this attorney, she will manage it.’”

Kashkooli had been bringing Alma to the United States for treatment since she was born. Her diagnosis at the Mayo Clinic was first of its kind for her disorder. Since then, other children with the same disorder have received similar treatments.

Kashkooli enrolled in Fordham Law’s LLM program because she wanted to make the most of her time while Alma was here for treatment, she said. When the travel ban went into effect, she was just beginning of her second semester.

Though reticent at first, she reached out to Fordham Law Clinical Professor Chi Adanna Mgbako and Assistant Dean Toni Jaeger-Fine, who connected her to the dean. Hudson Freeze, Ph.D., director of the Human Genetics Program at the Sanford Children’s Health Research Center in La Jolla, Calif, vouched for Alma, and New York Senator Kirsten Gillibrand intervened to grant her passage. 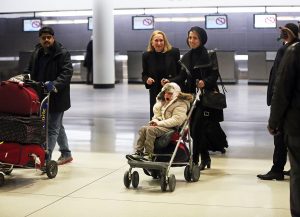 Fahimeh (Farimah) Kashkooli and a children’s aid with Alma, shortly after her arrival. Photo by Bruce Gilbert

“I realized then, ‘I’m in good hands, I can trust these people; they’re not going to leave me alone.’ That was the moment I thought, ‘I’m a part of the Fordham family’,” Kashkooli said.

Since her arrival, Kashkooli has secured a new medical team for Alma and enrolled her in school. Kashkooli currently interns at the New York City Supreme Court and is searching for a full-time job that will allow her to obtain a green card once her student visa expires on July 2018.

She wants to stay, to get Alma the best treatment and to put the skills she gained from her law classes to use, but it’s not clear that they will be granted extensions of their visas. It’s hard not to be bitter about the prospect of leaving, she said, particularly since she chose to focus on international law and justice, an area of jurisprudence in which the United States has historically been respected.

“When the time comes [that]I have to leave, I will respect the rules, and I will go. I’ll try to find another solution for my child–but with tears in my eyes,” she said.

“I don’t want to focus on the negative side, though. I got my degree, I got to know all these beautiful people, I got to experience New York City, and Alma’s condition improved. We have a long way to go, but I’m just trying to convince myself that good days are on the way.”