The following remarks were delivered by U.S. Attorney Preet Bharara at the Fordham School of Law Diploma Ceremony on May 19. He and fellow honoree Sally J. Bellet were awarded the degree Doctor of Laws at the ceremony, which was held at Radio City Music Hall. 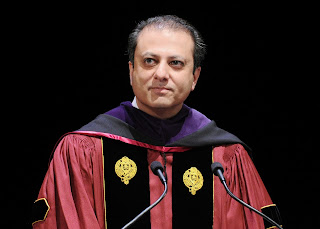 Dean Martin, Father McShane, distinguished faculty, proud parents, family, friends, and most of all, to the graduating class of 2013, congratulations on your accomplishments today.
Thank you for inviting me to speak here today. It is more than a privilege.
I want to give a special shout out to one group of graduates present today – the students who supplemented their fine Fordham educations with some practical training as interns in my Office. I think there are 23 of you here. Congratulations to you and thanks for the free labor.
I may not be an alumnus of this fine institution, but I was a proud teacher of legal writing here for two years before taking a job in Washington and I will always be grateful more for what I learned than what I taught at Fordham.
So here we are, all dressed up on a Sunday morning. And it occurs to me that many of you, quite frankly, should be in church – especially after last night’s parties.
But I guess you have a pretty good excuse today.
Now, if you would indulge me, even though we are not in church, I would like to spend my short time here talking about what I think is an important question of faith.
But the question of faith that I have in mind does not relate to any particular book of scripture or doctrine of theology.
Rather, I want to address the question of faith in the profession on which you are now embarking.
Here’s a newsflash: not everyone is enamored of lawyers. I hope that’s not too much of a buzz kill on graduation day.
And these days, it is understandably hard, sometimes, to have full faith in the legal profession. A lot of it we bring on ourselves – lawyers have no doubt done things to earn much of the mockery and disdain often dispensed upon us.
Our reputation is that we talk too much; we argue too much; we sue too much; we bill too much. That we are too litigious, too scorched-earth, too materialistic, too self-interested. That we exalt form over substance; we cause more problems than we solve; and we are prepared to win at any cost.
But this dubiousness about lawyers and about what they are capable of contributing is not, by any means, a new phenomenon. Consider the story of the man who would become one of the most important and influential lawyers in U.S. history.
That lawyer was Oliver Wendell Holmes, Jr., the late Supreme Court Justice. You see, his father, Oliver Wendell Holmes, Sr., was a medical doctor.
Almost a century and a half ago, after the son recovered from his third wound suffered in the Civil War, he decided finally to pursue a path in the law. As the story goes, Oliver Wendell Holmes, Jr., knocked on the door of his father’s study to advise him of this decision. He announced to his father, “I am going to law school.” 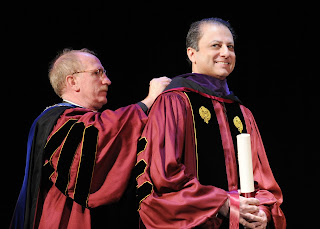