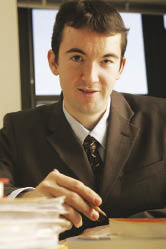 The U.S. Supreme Court began its term in October, and the year promises to be an exciting one. Here is a list of 10 Supreme Court cases that may be making headlines:

1. Health and Human Services v. Florida.
No upcoming case is bigger than healthcare. The lower courts are divided on the constitutionality of requiring Americans to buy health insurance. Some courts have ruled that the mandate is a valid exercise of the commerce power, but others have declared it unconstitutional. Expect a landmark ruling in the spring.

2. Perry v. Brown. The constitutionality of California’s same-sex marriage ban may be headed to the justices in the near future. An appeals court in California is poised to strike down Proposition 8 pending clarification of a technical question by a state court. The justices would then have to consider whether same-sex marriage is protected by the 14th Amendment.

3. Arizona v. USA. Arizona’s tough new immigration law encountered a setback last spring when a federal appeals court ruled that the law interfered with the federal government’s own immigration policies. Among the challenges is whether the state police can question individuals about their immigration status after being detained for unrelated offenses.

4. Hosanna-Tabor Church v. Equal Employment Opportunity Commission.
Do anti-discrimination laws apply to the employment practices of religious organizations? The question is complicated because the federal government usually does not interfere with the internal practices of religious organizations. Otherwise the Catholic Church might get into trouble for refusing to hire women clergy.

5. Florence v. Board of Chosen Freeholders. Are strip searches justified for prisoners who have been detained for minor offenses? The justices must consider how much discretion corrections officers should have. Civil libertarians maintain that officers must have reasonable suspicion that people are carrying weapons or contraband before invading their privacy.

6. FCC v. Fox Television Stations. Are the Federal Communication Commission’s broadcast decency standards too vague to be constitutional? Fox and ABC are in trouble for broadcasting nudity on NYPD Blue (ABC) and expletives uttered by Cher and Nicole Richie on the Billboard Music Awards (Fox). The stations contend that it is unfair to penalize broadcasters without clearer guidelines.

7. U.S. v. Jones. Do the police need a warrant before placing a GPS on a car? Antoine Jones may have been guilty of selling drugs, but the justices need to consider how much discretion police officers should have in using new technologies to observe and track citizens.

8. Golan v. Holder. Can Congress take creative works out of the public domain? Congress would like to restore the expired copyrights on a number of works, but arts organizations claim that the move will have a serious impact on their ability to perform classic pieces like “Peter and the Wolf.”

9. M.B.Z. v. Clinton. Who has the authority to recognize Jerusalem as the capital of Israel? Congress has declared that Jerusalem is the capital, but the president would like to keep the question open for diplomatic purposes. At stake: Who has the power to direct our foreign policy?

10. Howes v. Fields. Must police officers give Miranda warnings to prisoners who are suspected of new, unrelated crimes? Some say that suspects must be reminded of their rights every time they are accused of new offenses. Others object to what they see as the coddling of convicted criminals.