skip to main content
Return to Fordham University
You are at:Home»Law»Stocking the Digital Toolbox

Passwords and cyberbullying are great topics for engaging seventh graders at Manhattan’s P.S. 191 in debates about digital privacy.

GPS, facial recognition and WiFi? On an afternoon in February, not so much.

But when three students from Fordham Law School’s Center on Law and Information Policy (CLIP) offered to show students how to find the privacy settings on their mobile devices, students pounced on the opportunity for a little hands-on learning.

This was the fourth in a series of five classes on digital privacy offered this semester by Fordham Law students, covering everything from passwords and online reputation to social networks and behavioral ads. The class has been bringing CLIP volunteers and P.S. 191 students together for three years.

Tom Norton, privacy fellow at CLIP, said the center focuses on middle schoolers because it’s the age that children begin using the same technology that adults do.

“The students have a broad understanding about the things we teach in the lessons, and it’s always surprising to see how much they know. But at the same time, the depth of their understanding isn’t as developed as someone like you or me,” he said.

“To understand that sending a Snapchat may have serious implications on your life in one, three or five years from now is the kind of thing we want to teach them.”

Nichole Gagnon, a teacher for six years at P.S. 191 who has been working with CLIP since it launched its first pilot class there, agreed.

“Students don’t realize how easily people can access their information, and how things aren’t really private. People can track you through posts on social media like Facebook, and when you’re putting that out there for the world, it’s always going to be there. I don’t think they really get that,” she said.

Gagnon plays an active part in the discussions, prodding students to consider whether they’d want their parents to see everywhere they’d checked in, for instance. Like her students, she found the lesson on password strength to be interesting. Like the Fordham Law volunteers, she learns more about the newest apps and social networks from her students.

“When we were going through the privacy settings, I went, ‘Wow, I don’t even know if I have those set correctly on my phone,’” she laughed.

Twelve-year-old Tyuana Bivines said she changed her passwords immediately after the class (during which they visited the site howsecureismypassword.net). She admitted, however, that because one new password was hard to remember, she wrote it down.

“But it’s in a place where nobody can find it,” she said.

An avid user of Facebook, Kik, and Vine, Bivines said she’s also stopped her willy-nilly posting of pictures that are tagged with her location.

“When we first started learning about [online security], I was scared, but now that I know more, I feel like, ‘I’ve got this,’” she said. 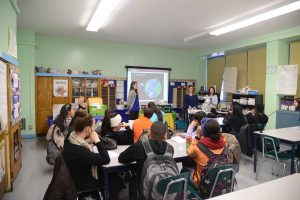 Although the CLIP volunteers are given materials to work with in the class, they are free to add their own touches to their presentations. For this class, one of two happening simultaneously at P.S. 191, the Fordham Law students used a picture of a breakdancing cat to illustrate motion capture. They also chose a photo of a cell phone tower blending in with a forest to accompany a lesson on cell phone triangulation.

Elena Rizzo, a native of Rome, Italy, who is working on her master of laws, said it’s been eye-opening to see how lax the American legal system is about privacy when compared with Europe. Working with students has been fascinating, she said, because on the one hand, they’ll frame a question by saying “a person I know did this…” instead of admitting they did it themselves.

At other times, she learns emerging technology from them because “sometimes they already realize there’s an issue” before she does.

“Rather, they’ve encountered problems, like someone tried to talk to them when they didn’t want to, or someone sent pictures to them. They were already aware of the problems; they just didn’t know how to solve them.”

Norton said that CLIP’s lessons, which are free to download are being used in 13 other schools around the country. Lessons are constantly updated to keep up with changes in technology, and will soon include video tutorials.

“The goal is not to show kids, ‘Look at how bad or how good this is,’” he said. “Rather, it’s to give them a tool kit and the wherewithal to form opinions about these issues on their own.”