skip to main content
Return to Fordham University
You are at:Home»Inside Fordham»Sixty Minutes with Eric Cantor 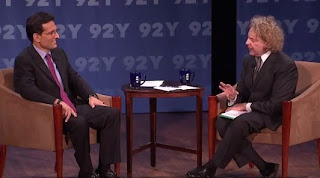 On Sept. 15, Fordham Law’s Forum on Law, Culture & Society joined the 92nd St. Y in sponsoring an appearance by U.S. House of Representatives Majority Leader Eric Cantor (R-Va.). Thane Rosenbaum, the John Whelan Distinguished Lecturer in Law and director of the forum, moderated the Q and A.
Among subjects touched upon by Rep. Cantor were Pres. Obama’s decision to seek congressional authorization for an attack on Syria (“I was in support of granting the president that authority because I feel so strongly about America’s role in the world”); the chemical weapons agreement with Syria brokered by Vladimir Putin (“I’m worried now about the credibility of our (U.S.) word”); the Tea Party within the Republican Party (“Unfortunately the characterization by the media has been misportraying so many of those individuals, those moms, those grandmoms and dads . . . we’ve got more agreement than we have disagreement within our party”); global warming (“What our party has stood for is really almost like a cost-benefit analysis. Yes, we want clean air, clean water, we want to protect the environment. But you can’t do that if you can’t afford to put food on the table”); and the White House’s Hanukkah party (“[Pres. Obama] can hold his own [on the dreidel”).
You can see the entire interview at the Forum on Law, Culture & Society’s website.